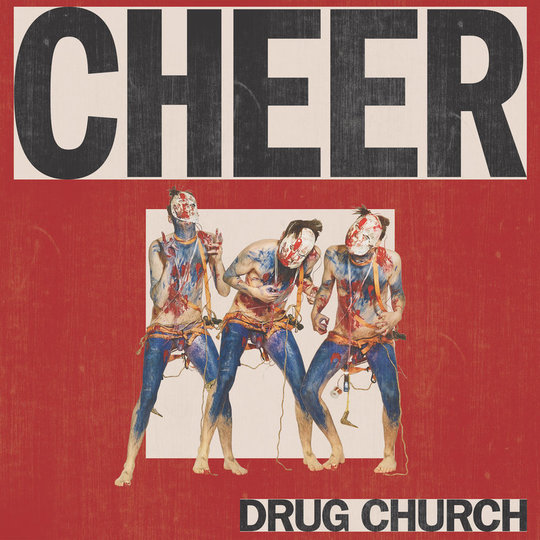 Over the past five years, Drug Church have been giving hardcore punk a fresh jolt of energy, using doses of inventive songwriting and Patrick Kinlon’s witty irreverence much like his other band Self Defense Family does to post-hardcore. Between their two albums Paul Walker, Hit Your Head and their slacker-hardcore anthem ‘But Does It Work?’ they have amassed a cult following which surprisingly hasn’t yet risen above that status in the way Turnstile or Candy, for example, have managed.

However, on latest album Cheer, that all promises to change. The Albany, New York quintet set their stall out immediately with the release of this album’s first single ‘Weed Pin’ almost one year ago. The track is arguably the best they’ve even produced so far and as a result much hype and expectation has built around their latest album I’m the year or so since that song’s release. Thankfully, Cheer, does not disappoint.

Clocking in at around 28 minutes over ten tracks, this is he band at their most focused and confident, maintaining their playfulness without losing any of their sheer power. Right from the brutal opener ‘Grubby’, a ferocious, pulsating kicking and screaming track, the band announce their intentions in only the kind of way one would expect from the five-piece. ‘Avoidarama’ seemingly updates ‘But Does it Work?’ by adding extra layers upon layers of melody, all fighting each other for attention but refusing to shine to brightly ahead of the rest.

Elsewhere, most recent single ‘Unlicensed Hall Monitor’ is a ripping slice of 3 and a half minute pop-punk resisting stasis at every turn with an unhinged ferocity, before settling on one album’s standout melodic moments (of which there are many). This is testament to Patrick Kinlon’s ever improving ability as a bonafide singer as opposed to being simply an incredibly charismatic if somewhat intentionally awkward vocalist. Kinlon already displayed this earlier in the year with Self Defense Family’s majestic Have You Considered Punk Music? but it is good to see it can translate to his heavier, more ‘straight up’ project.

That said, one of the album’s most startling vocal turns doesn’t come from Kinlon, but from Carina Zachary of post-hardcore band Husbandry, who takes over half way through the levels penultimate track ‘Conflict Minded’. Her presence is a breath of fresh air in Drug Church’s admittedly relentless tirade, and sets the mood perfectly for album finale ‘Tillary’, a melancholic pop belter which would make Robert Smith himself proud. The versatility shown here adds yet another notch to Drug Church’s (and Kinlon’s) bedpost as one of the most exciting bands around in a genre that doesn’t often do much experimentation or progression.