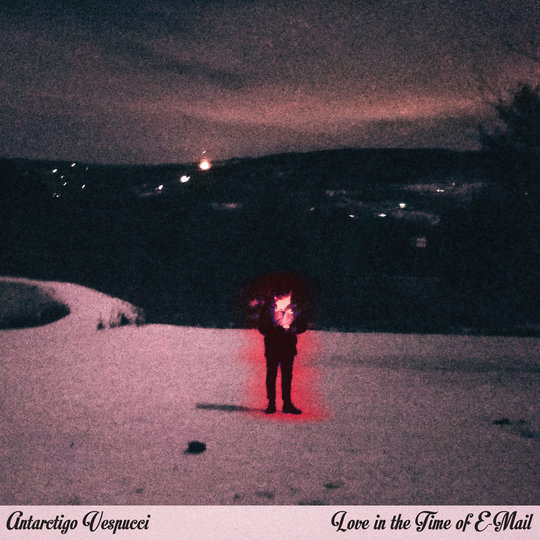 Supergroups/sideprojects can be risky things. Get them wrong and they come across as vanity projects, made for no one other than the musicians, and a few hardcore fans. Luckily Chris Farren and Jeff Rosenstock’s Antarctigo Vespucci project is a perfect merging of both musician’s strengths.

As the title suggests, Love in the Time of E-Mail, is about love, loss and redemption in a digital age. In the past you would meet up with someone face-to-face, or at least write a lovelorn letter to them, explaining how you felt. Now, due to the ease of technology, you just have to dial a number in bed and leave a voicemail. This is effectively what opening track ‘Voicemail’, and the album, is about. Generally sounding like Farren has made the call on the spur of the moment and isn’t sure exactly what to say. This is something we can all relate to and this recognition triggers a warm feeling of empathy in us. It says: These guys are like me. They don’t know what they’re doing, but they’re doing something.

‘Breathless on DVD’ is when the album comes alive. The first three songs gently welcome us into Antarctigo Vespucci’s world, then ‘Breathless on DVD’ kicks in and we’re off to the races. The way Farren’s neon synth punk and Rosenstock’s more visceral guitar wind and intertwine with each other delivers the first standout moment on the album. The fact that throughout Farren is thinking about a relationship that ended a decade before and if they’re still into the film, probably says more than he cares to admit. Lyrics like “Am I unhappy because I’m not free, or not free because I’m unhappy?” don’t hurt the enjoyment either.

The second half of ‘So Vivid!’ is well worth the price of admission. The guitars and synths take it turns feed-backing and droning, in a call and response manner. The fact that everything before this is a riot of crunching guitars and cascading synths is just the cherry on top. Lyrically Farren croons about past relationships in a way that makes you, for better or worse, to remember your entanglements.

‘Freakin’ U Out’ is just a balls to the wall rocker. It’s much needed, as the previous six songs have been slower and ‘Freakin’ U Out’ is a short, sharp dose of powerpunk. ‘All These Nights’ has a Flaming Lips vibe at times. Massive pop hooks, huge drums and a catchy chorus. This is pretty much what you hope and album will deliver. ‘Lifelike’ is the standout track on the album. Haunting piano accompanies Farren’s crooning vocals. Its totally divergent to the poppy, upbeat punk, but this change in tone, texture, and really accentuates Farren’s glorious vocals and shows that Antarctigo Vespucci are capable of writing something that can make you cry, as well as making you bounce. In the final third, after a gentle build up, they let rip and walls of guitar cascade around us.

Love in the Time of E-Mail is a fabulous album that perfectly sums up living, and loving, in a digital age. An era that Antarctigo Vespucci aren’t massively comfortable living in, but are doing their best to make the best of it. The best tracks on the album are when Farren’s neon punk and Rosenstock’s searing and guttural guitars merge to create something heartfelt and glorious. ‘So Vivid!’ and ‘Do it Over’ being a prime examples of this.

“Is it weird that I‘ve been thinking about you?” Chris Farren croons during ‘Voicemail’. When the music is this enjoyable? No. No it’s not.