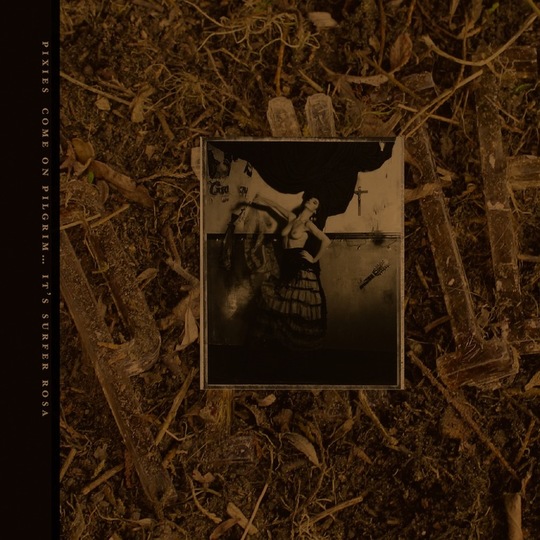 It took a while, but now, at the thirtieth anniversary of the release of Pixies mini-LP Come on Pilgrim and debut LP proper Surfa Rosa a year later, these records legendary status has been more than certified. While their second full-length, Doolittle (1989) is generally accepted to be the band's masterpiece, there is a raw energy about the band's first two releases which had to be distilled to create that album's refined majesty, which for some at least, gives them the edge.

It seems strange to think about now because Pixies' status as indie-rock legends is so solidified that to question that they were ever anything other than this feels wrong. But Pixies have always been an awkward act, creating a sound that can only really be attributed to them, influencing countless others, but were so far ahead of the game that when the Nineties grunge explosion (which they played a big hand in creating) happened they had more or less fizzled out. Kurt Cobain himself admitted that when writing Nevermind, he was effectively trying to ape these first two Pixies releases, but had timing on his side to become the megastar that plagued the rest of his short life.

Pixies, on the other hand, were a hugely respected band amongst critics, other musicians and dedicated fans of the burgeoning indie rock scene which was with Pixies' Come On Pilgrim released by UK label 4AD – which would eventually launch both into, near-enough mainstream limelight – but neither quite touched into widespread appeal in 1987. Pixies' crossover of DIY punk and surf rock was, initially at least, a strange one to digest. Enigmatic frontman Frank Black occasionally sang in Spanish to describe his youth in Puerto Rico or used surreal and explicit imagery surrounding incest, or his intense considerations of religion and reincarnation, all played with a sense of sardonic humour that runs rife through Pixies music (especially in the early days) which can be particularly witnessed in their recorded interviews or pieces of studio banter captured on Surfa Rosa.

However, there was a consideration for incredibly melodic top-lines that kept the whole sound in check from impenetrable madness. Come on Pilgrim's tracklist, as the legend goes, was chosen from a 17-track demo album the band produced over three days known as The Purple Tape by 4AD director Ivo Watts-Russell who initially didn't get the band at all and had to be convinced by his partner, a secretary at 4AD, to sign the band. When it did click for him (and as the years would go by, for many, many others who continue to today) he chose to leave the recordings in their original form to retain their energy and for 'Caribou' to be put at the front, (originally it was 'Levitate Me', the record's eventual finale) which was, in retrospect, a masterstroke. Black has a pretty distinct voice which doesn't always sit comfortably with the music on top, an intentional tension-builder of which the band pride themselves, but 'Caribou' is arguably his finest vocal performance from a technical point of view, a jaw-dropping introduction to the band for those going blindly into Come On Pilgrim in 1987.

By the time of 1988's Surfa Rosa, the band took their debut's positive response onto another level. Recording with Steve Albini, who at the time was still a relative unknown in terms of his role as a studio engineer, having only recorded a handful of other releases at this point such as Slint's Tweez, the band expanded on Come On Pilgrim's incredibly exciting beginnings in every possible conceivable way. It's worth noting this isn't the first time the two records have been collected together, Come On Pilgrim has been a bonus disc on the CD version of Surfa Rosa for years, given the two are intrinsically connected. However, this is the first time where they are presented chronologically so that Come On Pilgrim no longer feels like a mere companion piece but rather as necessary listening to appreciate the evolution of the band's sound as they approached their next record. The sound is slightly more polished, but only in that classic Albini fashion, and the songs are played marginally slower, but if anything, Surfa Rosa can now be heard as an extension of Come On Pilgrim rather than the other way around.

Of course, the greatest decision the band made between the two records was to allow Kim Deal to share the frontperson role. This is meant with no disrespect to Frank Black, who is an astonishing songwriter and a frontperson like no other, but allowing Deal to step up and write arguably the band's greatest song, 'Gigantic', was the moment that propelled Pixies into the big time. Indeed, the song, along with the album's other major single 'Where Is My Mind?' has been used in countless movie soundtracks, compilations and even recently TV commercials - not bad for an ‘unabashed praise song to a well-endowed black man’.

Across the two records, the band's use of tension, a constant push and pull which never really releases or resolves, characterised as the "loudQUIETloud" effect, is the band's calling card. Even 30 years on tracks like 'Levitate Me' or 'Break My Body' do exactly what they intend to with the listener, to suspend them midair and then bring them crashing down to the floor spinning in a world of sexual abuse and religious figures (sometimes simultaneously) haunting the songs' focaliser. Listening to Pixies, especially in their early days, was and continues to be an incredibly intense experience, but there is also a healthy enough dollop of playfulness - such as the studio banter - that counterbalances this. On this reissue's collection, the third LP of this triple release sees a live session from The Fallout Shelter recorded in late 1986, when these songs - such as opener and standout 'The Holiday Song' - were technically in their infancy. However, they already sound so accomplished it really is no wonder the band became the legends they did.