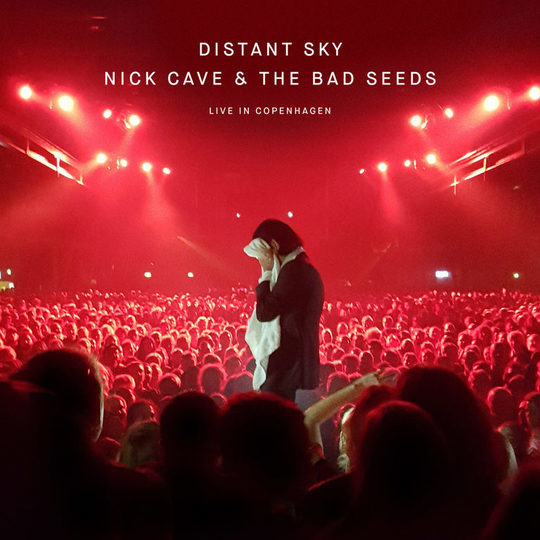 Nick Cave’s image, historically speaking, has always been an awkward one. Notoriously hard to pin down for interview – and, if and when you did, unlikely to give you anything but fuckin-with-ya answers; his music built a church for the lonely across so many decades.

So what happens when the head of this church endures an act so unspeakable that his trademark misery needs company? When his child passes away. Truth is, there’s no misery on the planet that wouldn’t need to be comforted after such a terrible accident. To reach out, mourn, screech, cry, pummel the darkness with a relentless fist.

So, it makes sense then, that the result for Nick Cave & The Bad Seeds would be to go on tour. His die-hard fans, those creatures-of-darkness he’s beckoned to in the shadows, they’ve become a strange family.

Thus, an album, and a relentless tour schedule, were born.

The Distant Sky EP, is four bullet sharp songs from the band’s performance in Copenhagen, 2017, that celebrate as much as commiserate this tumultuous time in the band’s history. Here we see a Cave ravaged by grief, a feral, emotional, oh-lawd-save-me-from-torment whirlwind – who clambers through the crowds begging them for a moment, just a touch – just a quiet reminder that they’re human, that he’s human, that he needs to be held. Touch my hand and I’ll touch yours. I see you, we can share the incredible burden of this pain.

‘Jubilee Street’, track one. A slow and careful ballad to a road I lived off in Brighton. We fly over an army of Cave’s people, as the slow menace of the all-consuming darkness grows. We’re enveloped by the overwhelming force of Cave’s new mindset “I’m transforming, I’m vibrating, look at me now…” becomes almost mantra like – and without surprise, as Cave’s tragedy means he’ll never be the same again.

‘Distant Sky’ next. Operatic and maudlin. Cave’s sadness centre stage. “Let us go now, my one true love, call the gas man – cut the power off, we can set out, set out for the distant sky.” It runs like a goodbye letter, a demonic funeral march, and dips into an almost religious sway – that is, a Bad Seeds one, at least.

Next, two classics reimagined. Madness incarnate, ‘The Mercy Seat’. As your GCSE English teacher would happily tell you, poetry can often become prophecy. An old poem or song can transcend into a new one, with a simple flick of intonation. I’ve always held ‘The Mercy Seat’ on two levels – one, the perfect-arced short story and two – the relentlessness of the emotional fall-out behind a great tragedy. In Distant Sky, we see a shift from previous, more rigid performances of The Mercy Seat we can find on other live EPS to this second interpretation. “In a way I’m yearning to be done with all this measuring of truth” – the mourning of a death, the ragged and earnest moments of the mental trauma that follow, the intense and chaotic bursts of guilt.

‘From Her to Eternity’ closes the EP. Our chaotic mindset continued. It’s a battle cry into this new landscape for Cave, one he can never return from. It’s an all-we-can-do for the Bad Seeds, which is scream the fuck into the void with all our endless pain. Hitting all instruments at once, it stands at a gigantic nine minutes, and fades back into that wall of noise we begun with at the start of ‘Jubilee Street’ – bringing our emotional grief-cycle full circle.

In conclusion, the Distant Sky EP is what happens when a lone wolf suddenly needs to reach out and touch. It’s the chaotic scream around loosing a child. It’s a careful help me into the darkness. It’s an invitation to come closer, to hold hands – at last, be close to our St Nick. And it’s fucking glorious. It could have done with a better mix, though.