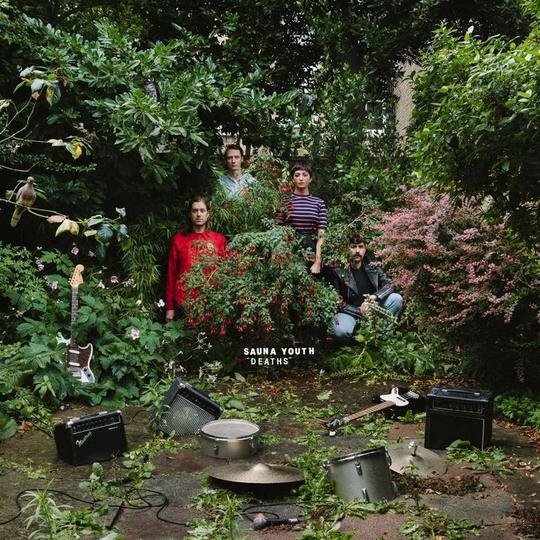 For almost a decade now, Sauna Youth have quietly amassed a cult status as one of the UK's premier punk bands. Simply labelling them ‘punk’ doesn't quite tell the whole story; while they certainly have a post-punk backbone that runs through all of their material, their range is wider reaching than such a reductive label suggests. In fact, Sauna Youth aren't even satisfied with just being a ‘musical’ experience, their close relations to the art and literature worlds appear often in their work, such as the excellent spoken word pieces on their latest album Deaths 'The Patio' and 'Swerve', which are extracts from singer Jen "Ecke" Calleja's short story about the murder of an artist.

Quickly then, it's easy to see the connection between that material and the album's rather definitive title. Reading between the lines, the band's announcement that ‘The final part in a trilogy of LPs, the songs in which comprise Deaths are collectively about the act of finishing, an ode to "the ending"’ suggests that this could well be Sauna Youth's final record, after their excellent debut, 2012's Dreamlands, and their mini-masterpiece Distrations from 2015. This would be a shame if true, as SY have risen to become one of the best bands in the UK, if not one of the most underrated. Distractions felt like the moment the band would take off, given how jam-packed it is with post-punk anthems, however, they remain very much a DIY/underground outfit with a bit enough following to be hugely excited for any new material the band release.

Immediately, on opener 'Percentages', Deaths announces itself as a much starker, scrappier experience than the relatively melodic Distractions. Fans of that album (like myself) may take a couple listens to adjust to this much more restrained and tighter sound, mixed by Fucked Up's Jonah Falco, but it is ultimately a rewarding experience to allow yourself to go along with. This isn't to say the band have scrapped their trademark dual male-female counterpart vocals, with Ecke and Richard ‘Boon’ Phoenix, as usual, holding court over their mechanically propulsive tracks. 'Unreal City' which follows shows the band are still fully capable of their anthemic talents, though with a darker twist, as the band describe their weird and wonderful home of London town.

As the album progresses, one goes deeper and deeper down the rabbit holes Sauna Youth have been digging throughout their career. On Deaths things are a little slower than before, but as a result, it means the music is more focused and thus the ability to pull more out of their sound is possible. 'Distracted', a reference to their previous album, is all motorik drums and simple riffs, but once again there is a hypnotic trick the band pull in plain sight that is irresistible. Monotony, the band's alter-ego where they all swap instruments, track 'Problems' makes a welcome return here, which is about as perfect of a boiled-down summary of a punk song you're ever going to find.

There is an overwhelming feeling of claustrophobia on Deaths which gives it its edge. Like the aforementioned 'Unreal City' or 'No Personal Space', which bleeds into 'The Patio' with a similar but not the same riff, followed by 'Leisure Time', the heaviest track on the record which concerns the work/art/life balance, for instance, very much recreates the major city experience that many face on a daily basis. There is light at the end of the tunnel, however, as the records final stretch of 'Laura' and 'Theatre 83' ends on a slightly more positive, poppy note, the latter of which being an anthemic rejection of the patriarchy, allowing the record to go out on a defiant death. If this truly is the end, Sauna Youth should be more than proud of the work they've created. It is an oeuvre many would be lucky to have, and this album detailing the struggles of balancing your art with every day working life is at once frustrating but relatable and rewarding.