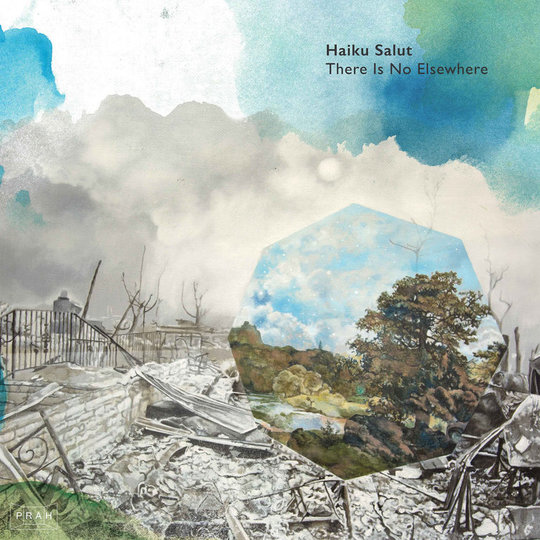 Even in the dryness of this last summer, the hedgerows grow verdant around this corner of Derbyshire, with splashes of grey coming from the stone of the cottages not the hue of the sky. Dropping away with a stark suddenness are cliffs among the trees - the rock faces shaped by weather and time into patterns that become both the hostility of something bigger than us, and the familiarity of where we belong.

This place can be felt throughout the latest album from instrumental three-piece Haiku Salut. There Is No Elsewhere is the band’s third - following on from 2013’s Tricolore and 2015’s Etch and Etch Deeper - and sonically builds on their earlier work, continuing on their individual but ever-intriguing path. They remain hard to pin down to a genre, the nuance and intricacy part of what makes this and their previous albums so fascinating, and their long-standing tagline of ‘Baroque-pop folktronic neo-classical something-or-other’ still fits.

But where the first two albums were collections of tracks loosely held together through the instrumentation and technique There Is No Elsewhere is more cohesive thematically, drawing not only on the drama and beauty of the landscape, but on reflection upon community and togetherness. There is as much solidarity in this record as there is escape through the sound, as much about the steadfastness of identity as there is openness to both other and change, but without lyrics to guide the listener it is the arrangement and the chosen instrumentation which coveys these messages.

Opening with a wonderfully crunchy sound (a manipulation of a NASA recording of pulses emitted by lightning) ‘Cold to Crack the Stones’ has a warmth and roundness from the off, the crackle steady beneath the chimes and bass-heavy beats. The track builds, layer on layer, dropping away suddenly only to return with the melodic motif echoed in some other way. Here it is the emotive addition of Glastonbury Brass which signposts toward togetherness, while the sonar bleeps juxtapose with the bold drumming to become something which is both comfort and a joy, playful and poignant.

It sets the scene for the album well without revealing all that is to come. ‘Occupy’ brings a pastoral take on circling rave beats (it’s a good thing, trust me) and there is the rare use of voice on single ‘The More and Moreness’. Rather than leading through language it is use of voice of instrumentation, another layer among the others. This track finds balance too between accordion and racing beats but again it is the swell of the brass band which lifts it, and your emotions with it, the stand against struggle in every note.

Field recordings from the place after which ‘Bow Wood’ is named mix with piano and the use of sounds directly from their environment adds an interesting dimension, the sound sparser and more clipped here and as the second half of the album gets underway.

The highlight here comes from the seven minutes of ‘I Am Who I Remind You Of’ with the looping vocal fluttering among the crunch, the bleep, the bloop. Less immediate than other tracks the pause and release, the twinkle, becomes mesmerising through the progression, beats in time with your heart. It shows Haiku’s underrated skills - to create something wonderfully organic and human without words and using much digital sound, and to give it all the space it needs to grow within you.

As their first release for a new label - neo-classical and electronica imprint PRAH - and with a definite narrative weaving through the sequencing, Haiku Salut have created an album both alluring in composition and intricate in arrangement. Thematically and in delivery There Is No Elsewhere is an album from a band revelling in their identity and in being true to themselves through a sound already highly recognisable as only theirs and at once formidable and fragile, beautiful and fascinating.