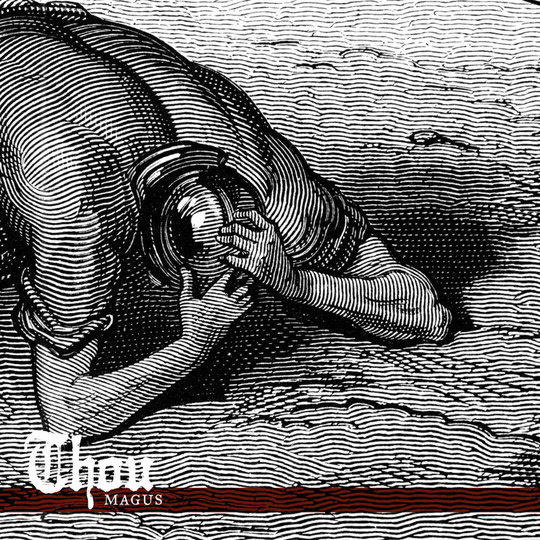 Magus, the fifth solo full-length proper by Thou, is already the fourth release of the year by the Louisiana sludge titans. A trio of mini-albums have already surfaced: The House Primordial (a deafeningly brilliant drone metal odyssey), Inconsolable (a surprising – but convincing – venture into dark folk), and Rhea Sylvia (a reorientation of the band’s typical sound, with more emphasis than usual on alternative rock elements). These three records, which would be more than enough to be going on with together or even in isolation, deserve to be regarded as more than mere appetisers. They may, however, be forgotten far sooner than they deserve, such is the majestic brilliance of Magus.

It’s worth emphasising, before continuing, that the typical question of whether this new LP is Thou’s best album to date is irrelevant. The group has set such a high standard for itself over the duration of its 13-year career that this is better seen as simply the latest chapter in a consistently excellent discography rather than a standout release in its own right. Magus is also (narrowly) the band’s longest effort to date, however, and thus could be fairly considered to provide the most comprehensive overview of everything the group does so well.

Anyone familiar with previous efforts will know exactly what that is: huge blackened doom riffs, gut-wrenchingly raw vocals, a genuine sense of apocalyptic doom. Magus has all these things in spades, consistently proving reminiscent of giants of the heavy music underground whilst retaining a distinctive character. Opener ‘Inward’ starts things off like a small avalanche, and the rocks keep tumbling from that point onwards. ‘My Brother Caliban’ provides a brief diversion into vicious lo-fi black metal: think Nattens Madrigal-era Ulver finding themselves opening for Fudge Tunnel. ‘Transcending Dualities’ is what Down might sound like if Phil Anselmo embraced black metal’s vocal stylings rather than the neo-Nazi flirtations of some of its pioneers. ‘The Changeling Prince’ is the sound of a meeting between Alice in Chains and Cult of Luna, ‘Elimination Rhetoric’ a fair approximation of what early Neurosis records might have been like with Pink Floyd-esque guitar flourishes. Closer ‘Supremacy’ wraps the album up as if condemning all that’s gone before it, appropriately leading the record to collapse into droning feedback.

Like Eyehategod at their most savage, or great post-rock bands at their least self-indulgent, Thou are fully aware of the power of timing. This is as a record that ekes out every last moment of punishing heaviness. Repetition can be a bad thing. In fact on most contemporary sludge records it is the main problem. Thou are able to balance their repetition however. ‘Sovereign Self’, one of the album’s three tracks to breach the ten-minute mark, is a case in point. The subtle tempo alterations on offer in this one mid-album highlight alone highlight the band’s gifts as songwriters. There are no clunky section transitions on offer. Thou are able to make everything cohesive, and thus all the more powerful.

If there’s a criticism to be made here it’s that, as ever, Thou’s consistency makes their records somewhat overwhelming. Magus’ arrival via Sacred Bones makes it likely to become many listeners’ first Thou album. Whether it is suitable for such a position, given the more concise appeal of the band’s first three full-lengths, is questionable. Nonetheless, much like the question of whether this is the band’s finest work to date, such doubts should not distract from the fact that Magus is a successful affirmation of Thou’s place as being amongst the greatest heavy bands on the planet.