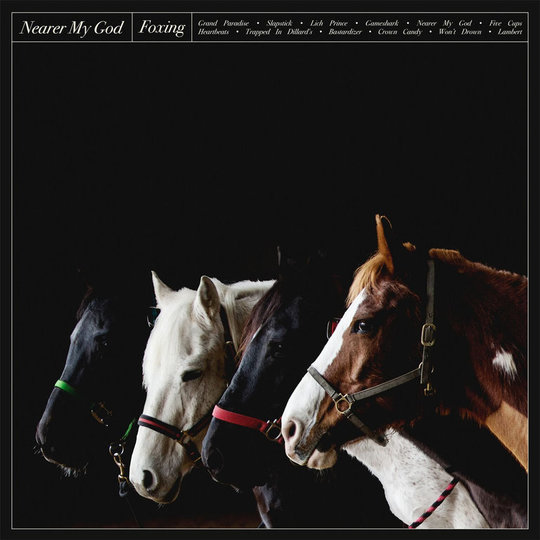 There is a sense that, with Nearer My God, Foxing have made their masterpiece. They almost didn’t.

The title of the album alludes to impending disaster; it’s taken from the hymn that the band apparently played as the Titanic went down, as well as the one that CNN, it recently emerged, had planned to play in the final moments of their last transmission if the end of the world was ever imminently at hand. When the band spoke to Stereogum earlier this summer, ahead of the record’s release, they talked at length of their doubts about the album; of guitarist Eric Hudson’s struggle to see the woods for the trees as he sifted through the songs he’d written, and of frontman Connor Murphy’s concerns that the band might not have made it past a horrible run of bad luck that included, amongst other things, the theft of $30,000 of gear in Austin, their van being written off in a road accident, and Murphy managing to break his nose at a show just days before a key live session - all over the span of a couple of years.

It was after that van crash that Chris Walla, the former Death Cab for Cutie guitarist who himself was grasping for a new identity after leaving the band he’d played in his entire adult life, reached out to the St. Louis five-piece to offer his help. It marked the beginning of a fruitful working relationship, which - in keeping with the band’s unlikely story - began with a cover of Dido’s ‘White Flag’ and culminates, for now at least, in Nearer My God, an album that burns with near-maniacal ambition. Maybe the incident with the van was supposed to happen; after all, Walla was the perfect fit, with his own storied history of knowing when it’s time for a band to put aside their anxieties and follow their nose. He nurtured his former group’s ascension from a lo-fi, Built to Spill-influenced outfit to indie rock titans with a panoramic musical outlook, and he helped Tegan and Sara go from spiky rockers to glossy, dance-infused pop purveyors. When The Decemberists were setting about the improbable feat of becoming one of America’s bigger indie outfits whilst writing songs deeply in thrall to old English folk tales, it was Walla at the helm for the likes of Picaresque and The Crane Wife.

Now, he’s helped Foxing face their fears and make an album that continues in the great tradition of third LPs that truly define the musicians who made them, like OK Computer, Source Tags and Codes or Relationship of Command. Since their inception, Foxing have consistently been characterised as an emo band at the crest of the genre’s latest wave, but like …And You Will Know Us by the Trail or Dead or At the Drive-In did with those aforementioned records, they have made a mockery of the idea that they can be pigeonholed here. Opener ‘Grand Paradise’ simmers with nervous energy - at least until the 1:40 mark, when Murphy screeches about being “shock-collared at the gates of heaven” over the thumping drop of the drums. Two songs later, on ‘Lich Prince’, they don’t sound like the same band; suddenly, they’re masterfully turning their hand to Deftones-esque drop-tuned atmospherics with Murphy growling about post-collegiate angst.

On the title track, everything is suddenly skyward, with the guitars spiralling and the vocals soaring in a manner that conspires to produce what sounds like it would’ve been a shoe-in to soundtrack a John Hughes film if he was still around. There’s a different, grin-inducing flourish on every song here; the intertwining vocal melodies on the fists-in-the-air ‘Bastardizer’, the cavernous percussion that runs through ‘Heartbeats, the dramatically pretty left turn that the interpolation of strings represents on ‘Won’t Drown’. The centrepiece, meanwhile, is ‘Five Cups’, which can be taken as being nine-minute shorthand for the overall level of sheer audacity on Nearer My God; a lament of lost friends, it somehow finds the perfect middle ground between ambience and menace.

Foxing are a band who have been sent a great many things to try them and yet, perhaps the biggest obstacle they’ve had to overcome to produce an album of this calibre was placed in their way by themselves. They had to believe that bold was best, and that ambition is never a dirty word when creativity of this level lies on the other side of it. Nearer My God is daring, flamboyant and consistently thrilling. It won’t make Foxing the biggest band in the world, but it probably should.