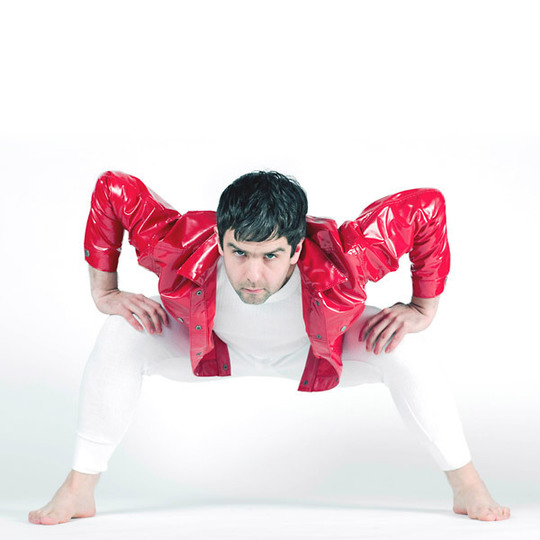 Hi! Glad you clicked here. No, I mean it. I’m really, really glad you’re here. My pulse is finally slowing down – I think I can finally form sentences again.

Phew. There’s so many angles to choose from here, I don’t even know which conceit to lead with. Let’s start with this: I’ve been listening to Choose Life for two months straight now, and it’s still the funnest thing that’s crept into my earbuds in that timeframe. OK? Bear in mind that we begin with straight-up suicide ideation – “I’m gonna escape this living if it’s the only thing that I do” - curve through the ups and downs of mental stability, wring our hands at how our fluctuations affect others, and end with a furious drum-n-bass vow to stay alive. Sounds heavy? Sure – and if we’d stumbled into this song cycle three years ago, synth punisher Michael Kasparis would have slathered on the shadows to conceal it all. But today’s Apostille rears its head into the synthpop light, and so instead Choose Life bustles with, well, LIFE – so no matter how warped or wacky this world gets, our host is there (and I mean, really there, on top of the mix) to remind us that we can laugh at the darkness.

Oof – now where do we go? Everything about this album makes me giddy and dizzy, like I’ve been dancing for an hour and won’t stop cos everyone’s watching. Let’s start with the style, yes – for, if you’re a remote connoisseur of old Eighties synthpop (like me), you’ll find your mind in a reel, too. From the bonkers, Fad Gadget-like squelch of 'Fly Like A Dolphin', you careen immediately into the straight New Order lines of ‘Feel Bad’; the easy sunset of 'Hanging On' radiates a warm Erasure aura, and then POW! you’re thrust into the black-black-black panic attack of 'Without Me' (more about that later). But that’s no big deal for Kasparis, a guy already steeped in contradiction; as he lords over the wildly prismatic Night School label, he’s gigged round in bunches of hardcore outfits, like the spontaneous combustion of Anxiety.

OK. So now we arrive at what really makes Choose Life so compelling. Where lots of electro-clashing cavaliers tend to tout these throwback bat signals for the sake of shock value, the melodrama in Apostille speaks to real & relatable palpitations. Both ‘Feel Bad’ and ‘Hanging On’ exemplify the sort of two-way conversations that the entire album aims to foster – as the narrator struggles to move on from an old flame, he implores the former lover to move on as well. “I would walk into the ocean just to give you a rest,” Kasparis vows on the former – which, in a brilliant swipe at the self, feeds back to the ego-stripped challenge proposed in opener ‘Fly Like A Dolphin’: why bother to stay alive, when death promises so much more?

To answer that question, Kasparis explores the interpersonal relationships entangled with his well-being. 'Without Me' kills me every time – not just because it throbs like an early cut from the Human League (swoon), but also because the urgency here to demand detachment or else just slays: “I never knew you that were gonna drown yourself without me / and now I want everyone to know to drown themselves without me .” It’s literally do-or-die here – and because we know our narrator has contemplated the beyond, the stakes sound that much higher. That crisis peaks at the manic ‘Thirteen Minutes’, where Kasparis seems to pivot at gunpoint – “just one life, and I wanna live it now. It’s wild, it’s cathartic, and it’s exactly how you’d hope to affirm your own existence – but that exhilaration only comes after the long, hard stare in the mirror, and even then how long will it last?

That Kasparis acknowledges all of this – the black cloud, the dissipation, the dread and the joy, the vicious cycle – only makes Choose Life even more addictive. He might be miles away from his noisier crypts, but this hook-laden dance floor still shakes the listener to the core; this time, though, he’ll sit you down, hand you a paper bag, and make sure you can still breathe properly.