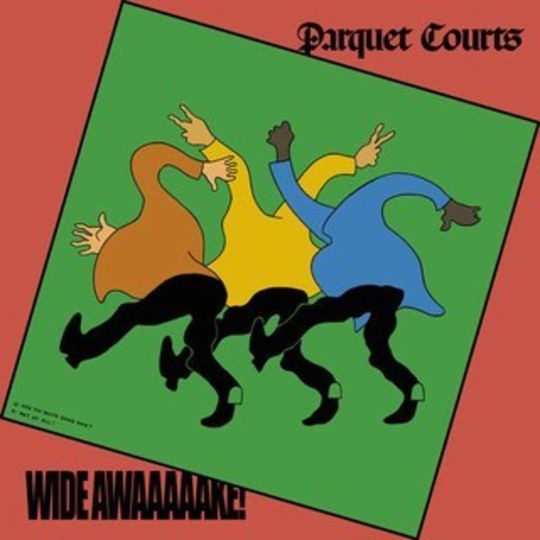 Last year was a doozy for the cliche of the ‘prolific’ band - King Gizzard put out five records, Thee Oh Sees are still being Thee Oh Sees - but New York’s Parquet Courts also deserve a shout. In the two years since Human Performance, two members have released solo records (vocalist Andrew Savage with Thawing Dawn and bassist Sean Yeaton collaborating with Mark Kozelek on Yellow Kitchen) whilst last year the band teamed up with Italian composer Daniele Luppi for MILANO, a conceptual full-length about the Italian city. What’s remarkable about the band’s output is not the quantity but the quality - Human Performance felt like a real breakthrough, one that might have needed some space to follow up. But nevertheless, here we are with a fresh Parquet Courts record two years later, and remarkably it’s even better.

The band’s sixth proper outing Wide Awake! sees them team up with Brian Burton (aka Dangermouse), who’s squeaky-clean production on some of Beck and The Black Keys’ tamest records could’ve raised some eyebrows. The NY punks are hardly the logical next step from collaborations with U2, Asap Rocky and The Red Hot Chili Peppers, and the last thing they need is their edges sanding down.

One listen through Wide Awake! is enough to dispel the doubt, however. Whilst opener ‘Total Football’ and lead single ‘In and Out of Patience’ would fit snugly on Light Up Gold, these moments sound new and surprising due to the clarity and invention of Burton’s recording. Burton was a fan of the band first before a collaborator, and you can tell - he gives them space to do what they’re good at, keeping their taut punk sound ticking and presenting them at their most confident and adventurous.

Wide Awake! sees Parquet Courts explore the farthest reaches of their sound, embracing art-punk minimalism with even more vigour whilst indulging in their most dense and progressive experiments. 'NYC Observation' and 'Extinction' count amongst their briefest, angriest moments (those pesky Wire comparisons won’t be put to bed any time soon) whilst 'Normalization' is the archetypal Parquet Courts song - a curt but captivating burst of razor-sharp guitars and brazen angst.

These refined moments fit happily alongside a few complete subversions - the wistful 'Mardi Gras Beads' channels the freak sunshine pop of Ariel Pink, whilst 'Back To Earth' reaches Flaming Lips levels of sci-fi weirdness with strange prog-rock vocal synths and dramatic piano stabs. The vivacious title track doesn’t even concern itself with a verse, choosing instead to repeat a shouted refrain and embellish it with congas, carnival whistles and a slippery disco bass line. These wackier moments aren’t at odds with the two-minute punk detours - each new foray is a welcome change of pace. It’s difficult to tire of hearing a band so clearly at the peak of their creativity, and Wide Awake! is paced so perfectly that you’re always ready and willing to receive what’s coming next.

Vocalist Andrew Savage also captures his most insurgent lyrical form here. 'Violence' pairs squawking keyboards and with one of his most intense diatribes as he seemingly takes aim at police brutality and the stifling of political expression. I say seemingly because his statements come cocooned in metaphors and allusions (including “the pink tube of paint called flesh” and “the pornographic spectacle of black death”) that require some decoding. His post-modern frustration morphs into straight-up misanthropy at times - “sometimes on life itself, I’m neither here nor there” he says on 'In and Out of Patience', whilst on 'Normalization', he ruminates on whether he himself would pass the Turing test of artificial intelligence. “I’m not sure I wanna know,” he concludes nonchalantly.

Truly, Wide Awake! is a success all round - the joyous sound of a band taking everything that makes them great and amplifying it, toying with it and producing something even greater. Whilst Parquet Courts’ lineage of influences clear as always, Wide Awake! is still crammed full of original ideas - there’s no band on the planet doing what they’re doing, and that’s might be the highest compliment you can pay a rock band these days.