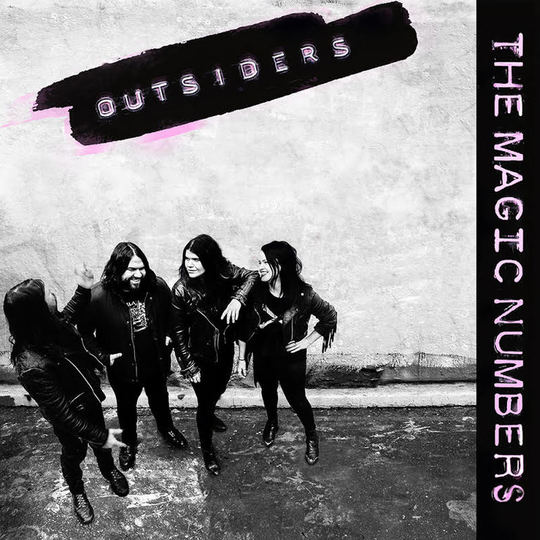 I have a whimsically-held memory of seeing a newly-signed and fresh-faced The Magic Numbers at gone-but-not-forgotten indie record store mecca Selectadisc, in Nottingham, prior to the release of their debut, self-titled album. The band were, to my memory at least, utterly delighted to even be there, it seemed, and they played a delightful, sunny and jaunty short set to the delight of all of the university students who had the time to get to the store at 4pm on a Tuesday afternoon. In-stores, largely, exist for the benefit of students, after all. Listening back to the songs from that debut album in the light of all the years and sheer life that has gone by the period between its' release and where we find ourselves in 2018, digesting the latest in what is an increasingly solid body of work, Outsiders, one thing is clear, just as life in all its sheer breadth, joy and disappointment was happening to all of us, so it undoubtedly has been taking its toll on the members of The Magic Numbers too.

Outsiders contains all the summery charm that made The Magic Numbers so vital all those years ago, but by golly they've matured in their songwriting too. This is a full-blown adult contemporary pop record, in the best sense. Opening salvo 'Shotgun Wedding' and 'Ride Against the Wind' immediately musically find us on comforting ground. Guitars jangle, there's plenty of movement in the percussion and bass parts and frontman Romeo Stodart's plaintive howl is in place as keenly as ever as he alternately begs "This is our life, don't steal, you keep twisting the knife, I can't feel” on the opener and “Hey there, we can ride against the wind  lady, we will ride again” on the latter. In the best way, you know without a shadow of a doubt that you're listening to an album by The Magic Numbers. Not many bands in the contemporary scene have such distinctive characteristics which mark them out from the crowd.

'Runaways' shows upstarts like SunflowerBean how a serious, widescreen pop song is done, whilst the meaty 'Sweet Divide' surprises with a gorgeous lift into a sweetly-harmonised chorus. Before you know where you are, you're back in love with a band that it was never fashionable to love, but who keep on giving and giving fine albums nevertheless. In preparing to write this, I've come to the shameful realisation that, even though I had heard a good few albums of theirs, I've missed whole albums in their canon. They write songs that are timeless. Don't be like me and let that time drift by.

It goes on beautifully. Latter highlights include the stomp of 'The Keeper' and the blues of 'Lost Children', showcasing yet more of the band's versatility. Closer 'Sing Me a Rebel Song' takes things in an even more dramatic direction as Romeo seeks “a song that's gonna save my life tonight”. The song unfolds into a beautiful climax to a really fine record.

Maybe The Magic Numbers will never change the world, but the sheer intelligence and quality of their songs makes their corner of it a little bit brighter and better. Here's hoping their time as outsiders is coming to an end.