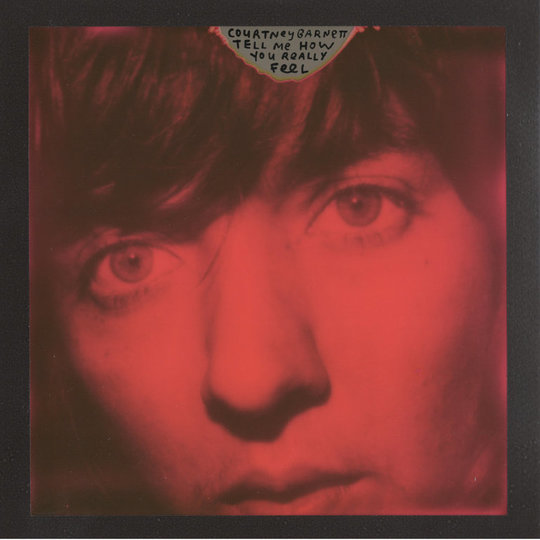 A murky, sober strum precedes the first lyric on Courtney Barnett’s second release Tell Me How You Really Feel, with the Melbourne songwriter remarking in a sensible coo, “You know what they say / No one’s born to hate….”. It feels like quite the departure from the snappy and humorous ‘Elevator Operator’ which opened her 2015 debut, Sometimes I Sit and Think, and Sometimes I Just Sit. While CB has always managed to combine goofy and self-depreciating lyrics with moments of life-affirming observation, the opener predicts a more somber tone and melodic strength that follows a thread on her second LP. The song continues to build in a vaguely eerie fashion as her voice shakes describing an episode of the empty bottle blues, trading in her matter-of-fact deadpan delivery for something a bit more vulnerable as distortion screeches behind her.

The scarlet gaze on the album cover reflects this openness and scans the viewer throughout the video for the breezy ‘City Looks Pretty’, a track perhaps detailing Barnett’s homecoming after a recent world tour. “Friends treat you like a stranger and / Strangers treat you like a best friend / Oh well”, she shrugs it off. Throughout the video a kaleidoscope turns to reveal a peacock, a spinning globe, carousel, an aquatic scene, kangaroos, and Courtney peering wide-eyed into the lens as she soaks in what one can only assume is a scene from Australia. While instrumentally it’s not much of a departure from the Pavement- era jangly garage chords that appeared on her previous work, it’s a notable shift in perception. In a world where one needs to navigate between digital alter-egos or compromised versions of the truth, Barnett is a reliable source to serve up her raw inner reality through song.

Barnett doesn’t seem interested in taking the listener on as many off the top-of-the-dome lyrical adventures this time around, like in one of her most popular songs from her debut ‘Pedestrian at Best’ where she barely pauses for a breath during an internal dialogue. However, there are a few tongue in cheek jabs, and some sticky melodies that are sweet enough to hang around in your mind without getting stale. Courtney seems to be playfully eye-rolling as she sings, “You must be having so much fun! Everything’s aaaa-maaaa-zing!” on ‘Charity’, one of the catchiest takes. The lead guitar swaggers around her delivery in a power-pop move recalling The Nerves as she quips “Meditation just makes you more strung out, I wish you had a guru who told you to let it go”. As her voice rises in frustration after the second chorus as she lets out a small, innocent cough, seemingly adding to the joke.

Lead single ‘Faceless, Nameless’ uses a play on a Margret Atwood quote from A Handmaid’s Tale (“Men are afraid that women will laugh at them, women are scared that men will kill them”) as a vehicle to address domestic violence when she adds “I hold my keys between my fingers”. This song, and ‘I’m Not Your Mother, I’m Not Your Bitch’ (which clocks in under two minutes long) see her grittier guitar tones surface. With the most driving drum backing on ‘Tell Me…’, the latter song summons a malaise howl out of the vocalist – cueing a Hole-era Courtney Love.

The title ‘Crippling Self Doubt and a General Lack of Self Confidence’ could sum up one facet of the many reflections Barnett offers on this record. The Breeders’ sisters Kim and Kelly lend a hand on the track (on guitar and then vocals). “I don’t know / I don’t know anything” becomes a fun sing a long ode to naivety. What is most interesting about Tell Me How You Really Feel is Courtney’s commitment to nit all the nodes, albeit subtlety – confident enough to stand up to bullshit and hand out a slight, humble and admittedly bewildered enough to call herself “no maverick, lesser than average”.

This release comes less than a year after her collaboration with Philly daydream folkie Kurt Vile – she seems to even channel this duet on around 1:26 on ‘Help Your Self’ when she lets the lyric “Pull back and ruh-leeese” tumble out languidly. The final tracks end the album on a stripped down, simpler note with wide open echoes and gently thumping rhythms on ‘Sunday Roast’. “I know you’re doing your best / I think you’re doing just fine”, lyrically coming full circle to offer encouragement….maybe words she would’ve like to hear herself during the haze of the first track. This is an album that is better digested all together in one sitting, just as if you want the roast you’d probably want the gravy, potatoes and carrots too. The qualities that Barnett got pigeonholed with on her earlier EPs and debut – 'slacker, grunge, stream of consciousness' do appear, but only as slivers in a grander offering that requires a palate willing to savour the dish.