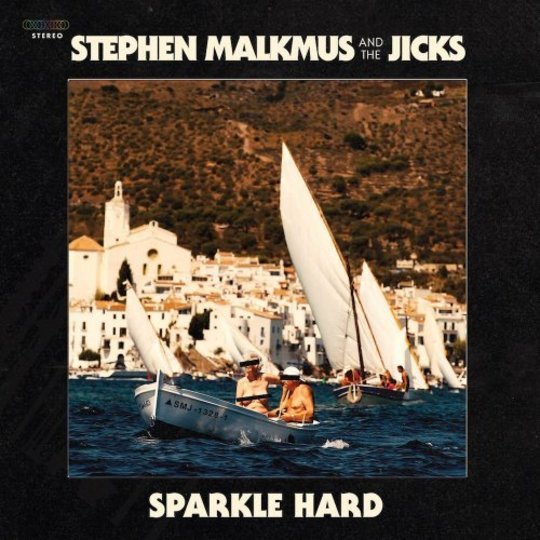 Back for a seventh time with his post-Pavement outfit The Jicks, Stephen Malkmus sounds like he’s having a blast.

The overriding tone of this collection of songs is one of warmth. It’s there in the vocals in the affable, conversational style of the beginning of opener ‘Cast Off’ and the sweet delivery of ‘Middle America’, in the mellow stabs of duelling guitar in ‘Future Suite’, and in the gentle acoustic sing-song tune of ‘Solid Silk’.

Running alongside that, though, is a hugely entertaining cut-and-switch grab-bag of styles and moods. So one minute you’ll be settling in to a low-key piano-led intro only to be hit – bam! – with a superbly psychedelic guitar wig-out, with a spot of Malkmus’ characteristic yelp/shout vocal just to keep you really on your toes (‘Cast Off’). ‘Kite’ starts out like a low-key live acoustic performance then smacks you around the face with more of that out-there guitar, an improvised solo rounding out the song in fine, fried style. Closing track ‘Difficulties/Let Them Eat Vowels’ acknowledges its hybrid nature in its name – more like two tracks spliced together (the first another quiet/LOUD banger, the second an extended jam). The band sound scratchy and intense on ‘Bike Lane’, yet light and (that word again) warm on ‘Refute’, ‘Middle America’ and ‘Solid Silk’.

Some of the best moments on this pretty great collection come (for this old Pavement fan, at least) in the moments where echoes of Malkmus’ old band emerge. The opening guitar chords of ‘Middle America’ – one of the album’s best songs – instantly evoke ‘Here’, one of Pavement’s most tender moments; and this track, too manages that trick of being sweet, tuneful, gentle and uplifting whilst still being sufficiently oblique to sidestep easy pigeonholing. It even succeeds in making the phrase “May you be shitfaced the day you die” sound like a benign, charming wish for someone.

‘Solid Silk’ has a similar charm, accompanied by a pace and vibe more akin to easy listening, and some superb sound-nice-but-I-have-no-idea-what-they-mean lyrics in the best surrealist Stephen Malkmus tradition – “it’s lug eat lug”, “cynical pinnacle”. When he sings that he “scratched out a doggerel verse or two”, he is perhaps being overly modest.

Kim Gordon’s wonderful guest appearance on ‘Refute’ is smart, funny and sweet. A subversive version of a him-and-her break-up song, Gordon’s worn, wise, world-weary vocal lends itself perfectly to her tale of au pair seduction and rejection of “middle class values and normalcy”, while Malkmus’ scene-setting verse sets himself up as the wronged party – “a man who dared to fall head over heels”. They end the song, sounding like wise elder statespeople of affairs of the heart, with a warning to “the children” that “the world doesn’t want you”, yet somehow still manage to leave the listener with a smile on her face.

For someone who’s been in the game so long, Stephen Malkmus and his band show no signs of either running out of creativity or falling back on former glories. When this album is good it’s superb – probably the Jicks’ finest yet; and when it’s less so – less focused, more haphazard and wilfully out-there – it’s still pretty damn great as well.