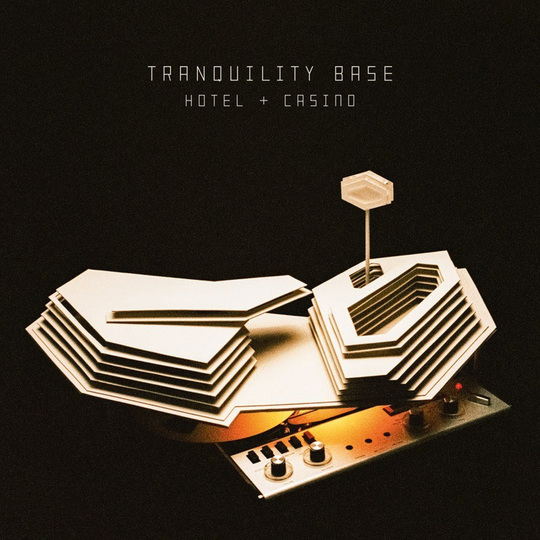 Back in 2008 Arctic Monkeys’ Alex Turner and a pre-Blood Orange Dev Hynes formed a one-night-only covers band, knocking-out early-Noughties indie dancefloor hits by The Von Bondies, The Vines, Interpol, The Walkmen and The Strokes; a joyous tribute to the clattery garage racket and sticky floored basement clubs that inspired both to form bands. It’s possible that that gig, and the era that inspired it, has been playing on Turner’s mind lately. After all, his celeb-schmoozing LA life couldn’t be further from the young man shaking his floppy fringe in a Sheffield bar to ‘Last Night’ and ‘Hotel Yorba’ while dreaming of indie-rock stardom. That might explain why he’s written an entire album about, metaphorically at least, living in a luxury hotel on the moon; a life that is distant, isolated and extremely removed from grubby old planet Earth. Maybe it’s why Tranquility Base Hotel + Casino opens with the line “I just wanted to be one of the Strokes, now look at the mess yer made me make” on the floaty, jazzy scatter of ‘Star Treatment’; why on ‘One Point Perspective’ he croons “I’m gonna form a cover’s band anorl” maybe with regret, maybe not… there’s a coldness to some of Tranquility Base… that makes it genuinely difficult to tell.

This is not the Arctic Monkeys of What Ever People Say I am, That’s What I’m Not. It’s not even the Arctic Monkey’s of their last album, 2013’s AM. If it wasn’t for that familiar, languid Sheffield drawl and very occasional forays into tight, fuzzbox grooves, you’d struggle to recognise this as the same band. Tranquility Base has more in common with the retro ballads of Turner’s The Last Shadow Puppets, or his solo soundtrack to the movie Submarine. This is not an album influenced by the Von Bondies and The Vines. Instead its a peculiarly warped take on Serge Gainsbourg, hitched to the frazzled genius of Miles Davis, mid-period Beach Boys and the end-of-the-line, weirdo-Beatles of Abbey Road. Tellingly it takes inspiration from both of these bands at a point where they were stretched to breaking by fame and expectation.

The 11 songs of Tranquility Base are shot through with disconnected isolation and loneliness. The title track undermines its lush instrumentation and some beautiful bass playing with a chilly, odd atmosphere; all unsettling keyboards and Turner’s voice rasping at the top his register about “the moon’s side boob”. ‘Golden Trunks’ invokes the lost melancholy of Pet Sounds, while ‘The World’s First Ever Monster Truck Flip’ is the sound of ‘Do You Like Worms? (Plymouth Rock Roll Over)’ and ‘Lucy In The Sky With Diamonds’ having a coldly beautiful existential crisis to “the exotic sound of data storage”, and ‘Batphone’ sees Turner “sucked through the hole in a handheld device”. ‘Science Fiction’ underlines its internalised dystopia by nicking the descending piano refrain from Abba’s ‘Money Money Money’; as brazen steals go it’s pretty successful, importing some of that songs unsettling cool.

Happily there is still fun to be had in this post-post-modern-retro-Monkey-world. ‘Four Out of Five’, the closest thing here to the classic Arctic Monkeys sound, is built around a palm-muted riff that could be Lennon and Harrison jamming to McCartney’s piano; minimalist instrumentation offset by some lovely harmonies. It gets more Beatlesy on ‘She Looks Like Fun’, its swooping refrain living up its title. Turner’s lyrics are as witty as ever and some of his best one-liners are here - “dance as if somebody’s watching, because they are” or “I just want to make a simple point about peace and love, but in a sexy way” though you sense a growing panic behind the grin. Including a line like “I’ve a feeling the whole thing may end up too clever for its own good” is a smart get-out clause, but being self-aware doesn’t really excuse Turner’s occasionally smug tendencies.

There’s plenty to enjoy and appreciate about Tranquility Base Hotel + Casino; the playing is dextrous and satisfying, the textures are gorgeous and the ambition on show is commendable; what other band of their generation would attempt the dark, jazzy changes of ‘American Sports’, or the minimalist funk of ‘Batphone’? Who else would rewrite Bowie’s ‘Five Years’ as a lounge ballad and give it a title like ‘The Ultracheese’? Admittedly, not all of those choices work and songs can meander in directions that are at best unlikeable and at worst plain irritating. Still, where some of their peers are so unforgivably one-dimensional, let’s not slate a band for having too many ideas, eh? Though it may not look good on the dance floor, this is a rich and complex record which rewards patience (and a good set of headphones). It’s not the Arctic Monkeys you might expect, and living inside Alex Turner’s identity crisis can be an occasionally uncomfortable experience, but give it some time and this sixth album reveals itself as one of the most interesting of the band’s career.