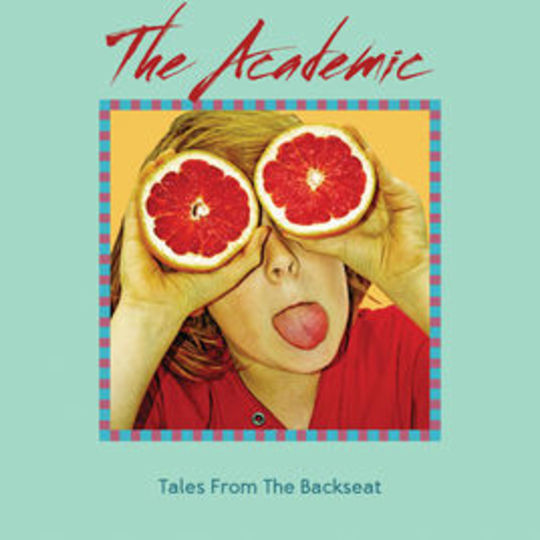 The new year always brings a fresh bout of ones-to-watch artists, and this year The Academic is one of the first of those bands to release a record. Tales from the Backseat is the debut album from the four-piece group from the Irish Midlands. As the follow up to their 2015 EP Loose Friends the album promises tracks which are energetic and explosive, with surprises around every corner. With all the band members in their early twenties, the record explores themes of coming-of-age, nightlife and relationships in a small town.

On first listen, the album comes across as a little underwhelming, maybe like the kind of music you would hear in the background in Wetherspoons or in those scenes in TV shows where a band performs at low volume in the background while characters discuss something more important. The music on this album sounds like a hybrid of a lot of other bands, such as The 1975, Kodaline and The Vaccines, but not really yet at the level of any of them. It’s hard to remember what most of the songs sound like until you’ve heard them several times. It’s accessible and easy to listen to, but equally possesses the quality of sliding past you without leaving any lasting impact if you don’t listen quite hard enough.

The album opens on upbeat and summery ‘Permanent Vacation’, which is a high-energy opener. The chorus is a little haphazard as the band jaggedly tries to cram as many words in as possible, alongside the slightly rudimental refrain of "What’s my motivation?/ To leave this permanent vacation". The second track, ‘Bear Claws’, offers greater potential, as the lyrics implore the listener to cast off dating tradition and "Show me all your flaws, show me your bear claws/ Go rip your heart out tonight". Sonically and lyrically, it’s more interesting than its predecessor, but it’s not exceptional.

The band’s first single, ‘Different’, is fantastic in its new incarnation, with guitars creating a wall-of-sound feel and vocals by Craig Fitzgerald soaring over the backing. The track is imbued with energy and fervour. Lyrically, the song is simple, but this supports the essential single-minded nature of the song.

Other high points of the album include ‘Bite My Tongue’, a fiery, high-octane riposte of a track, and ‘Fake ID’, which is self-deprecating, clever and more memorable than other parts of the record. Other tracks fall flat, such as ‘Northern Boy’, which is a little monotonous and lacklustre. Additionally, final track ‘Girlfriend’ makes an early play for some of the most badly-written and cringe-inducing lyrics of 2018 with "She’s only 20 and she’s driving a Bentley/ She’s only 20 and she’s driving me crazy".

Overall, the album has a lot of good elements, such as great harmonies and frequently interesting instrumentation. You’ll need to get past the clunkiness of some of the lyrics in Tales from the Backseat to be able to enjoy it. It isn’t about to win any prizes for its exceptional horizon-stretching, genre-setting musicality, but that isn’t really what the record has been created to do. It’s a relaxed and fun record about growing up and not taking things too seriously, and it certainly conquers that vein successfully. I think a lot of teenagers and young adults will enjoy it. However, within their indie rock niche, The Academic will have to work harder to create music as memorable and lasting as some of their peers.