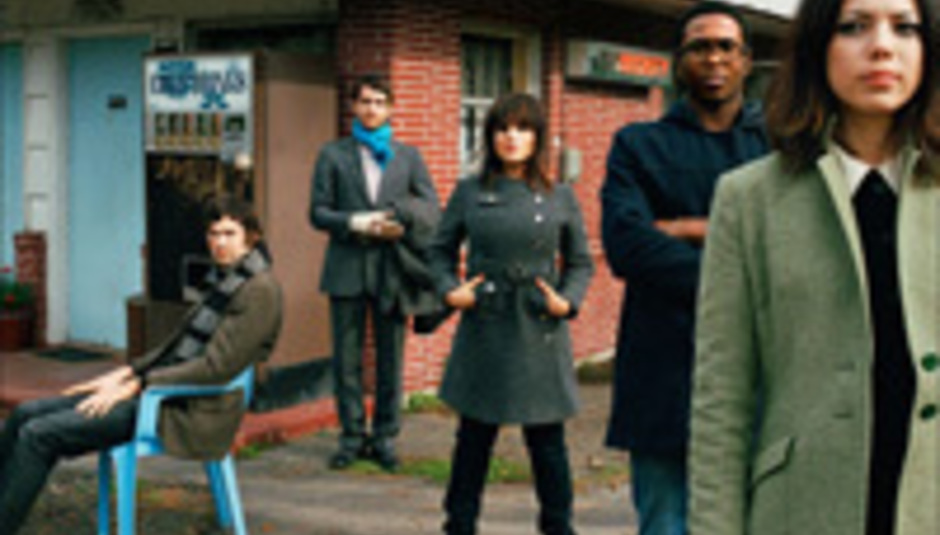 “Do you think that you have the trick,
For a city that’s so spent and sick…?”
‘All Medicated Geniuses’

On a balmy summer’s day in north London, the city consumed by an unforgiving sun that, an hour or so earlier, plays havoc with DiS’s eyes as we sit in an unfamiliar pub full of sideways-glancing locals, Pretty Girls Make Graves seem ready, willing and able to administer the appropriate medicine. The Seattle quintet mesmerise an Islington crowd, breaking walls of reservation down effortlessly; they deliver a set that scores highly on all points: dance friendliness, sing-along-ability, and likelihood of lasting in one’s long-term memory. They’re a band re-energised, reinvigorated by the release of album number three, Élan Vital.

But all is not entirely rosy: said long-player was greeted by a number of critical poison pens back in April, and one popular monthly saw fit to award it but one of their coveted stars. Singer* Andrea Zollo, one of a pair of pretty girls in Pretty Girls – the other, *Leona Marrs, sits beside her in the aforementioned bar, sipping Leffe as her bandmate drinks Pimm’s; their male colleagues,* Nick Dewitt, J Clark and *Derek Fudesco, are either being interviewed elsewhere or attending to the band’s merchandise – wasn’t surprised by the album’s mixed fortunes, though.

“I actually feel that every record we’ve put out has experienced this split,” says the singer, head-to-toe in black despite the heat. “I honestly feel that way – it’s always been hot and cold from album one. People that loved album one didn’t necessarily like the next. I think we’ve always been that way.”

Album one was Good Health, a nine-tracker initially released through Lookout! and subsequently re-issued by Matador with four additional tracks in the wake of the band’s second album, and Matador debut, The New Romance. Zollo continues:

“People who heard The New Romance first aren’t really into Good Health, so this is really just opening up a third… a third room?”

DiS makes a suggestion: the third record is like the third book of a series that, as yet, has no end in sight, rather that than just another chapter in the same story; it’s that different, compositionally. Zollo nods approvingly, while Marrs simply smiles, happy to let the singer answer most of the questions. The ‘new girl’ in the eyes of the audience, Marrs has been an integral part of Pretty Girls since the departure of Nathan Thelan, the guitarist who left after The New Romance; it’s Marr’s contributions that give Élan Vital its air of freshness, that lift it above its comparatively formulaic predecessors. For all her stage presence, though, the multi-talented musician remains largely mute during out interview time.

“I don’t think that we’ve ever been an ‘instant’ band,” continues Zollo. “People have said to us that the first time they heard our record, they didn’t know what to make of it, but the more they heard it, and the more they heard it… one day they were just like, ‘Oh! I just got this whole thing all of a sudden and now I love it’.”

“I’ve had that happen to me,” adds Marrs.

“We knew, when we were doing this record, that we had no idea what people were going to think about it,” says Zollo. “We knew it was going to alienate some of our old fans, but we did that with our second record, too. I, personally, never want to just repeat a record, although sometimes that’s a double-edged sword: we threw away a lot of songs because they sounded too much like older material. But I think, with this album, we had a lot more fun making it – like, we were a lot more open to ideas, which made it looser, and made everyone have a good time. We weren’t worried about what the fans would think. This was the first time when we were like, ‘Anything goes’.”

“There’s lightning in our hair,
Turn the volume, turn the tone”
‘Wildcat’

Very much a studio album – one that makes full use of the modern technology available to artists when recording their latest wares – Élan Vital is perfect headphone material: guitarist Clark, alongside producer Colin Stewart, was keen to add a previously unexplored depth to the album, adding layers atop layers to create a collage of intoxicating sound. What’s surprising, then, is how well its songs are transferred to the live environment. Even ‘Parade’, recorded with two drum kits, is performed using only one with great results on the Islington stage. It’s Marrs, though, that many an eye is attracted to, whether she’s stood behind a keyboard providing vocal back-ups, or front-of-stage with an accordion strapped over her shoulders: her fleshing-out of the band’s sound, its new-found richness, is absolutely palpable.

“I have enjoyed being in this band a lot more since Leona joined it,” says Zollo. “I mean, I don’t have to tell you how awesome she is. We’re all fans! And she’s an acupuncturist, also. She plays with needles…”

Marrs chips in, smiling to herself before a word leaves her lips: “I get right to the point.”

“Things are going to change,
That starts today”
‘Pyrite Pedestal’

Although Élan Vital has been in stores only a few months, its gestation was so prolonged (The New Romance was recorded a whole four years before its successor’s release), and delayed by an aborted attempt at a third album, that the band’s collective thoughts are already turning to their next long-player.

“We actually would like to start writing,” says Zollo. “We’ve been talking about starting as soon as possible, because of the gap [between albums] – we do not want that to happen again! The time from when you write a record, and then record it, to when it comes out, is so long… by the time a record comes out you’ve been playing those songs for a long time already, or at least that’s how it is for us. Some of the songs on this record we’ve been playing for years, as they were going to go on the record we didn’t put out, so we’re ready!”

Later, before an audience enraptured, Pretty Girls will be genuinely moved by the reception they receive, one that manifests despite the adversity of early-set gremlins. Zollo and Fudesco offer heartfelt thanks, and as the band encore with ‘Speakers Push The Air’, from their debut, a few hundred people are united in joyous celebration – celebration of music as provider of unending happiness, of sustained pleasure and lasting love. Whatever critical floggings or fanbase back-turnings Pretty Girls may inadvertently suffer in the future, they’re now writing music that makes them happy: that many, many others are swept up in their excitement, well, that’s one fantastic coincidence.