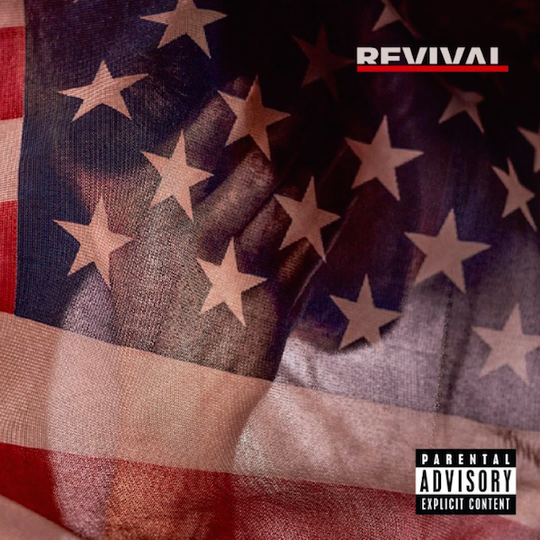 “Bitch, I wrote 'Stan'.” Two tracks in to Eminem’s ninth studio album, released just before Christmas last year, and he’s harking back to what was probably his finest moment, the 2000 Dido-sampling single that told a chilling yet somehow still heart-wrenching tale of fandom and a young male life gone badly wrong.

So does that mean this Revuval is going to be a pitiful canter through past glories from an artist long past his best? Well, no, not quite: in Eminem world things are never quite that straightforward, are they?

This is an album that could certainly have done with some editing – it feels about four or five tracks too long at a total of 19. But it'sone whose high points do more than justify their existence. There’s a marked excellence to the melodies and vocals of a string of female guest spots from the off. Beyonce’s stand-out appearance on the impressive opener ‘Walk on Water’ is a stunner of elegiac piano and gospel singing, a heartfelt expression of vulnerability (“If I walked on water, I would drown”) that sees our hero scratching around audibly for inspiration, swearing and sweating over his verses while B’s voice soars above. The trend continues with the (uncredited) guest vocalist on ‘Revival (Interlude)’, Skylar Grey’s contribution to ‘Tragic Endings’ – regret parcelled up as country rock, Kehlari, gentle and sorrowful on ‘Nowhere Fast’ and Pink (a great pairing for Eminem) who brings the power ballad grandiosity on ‘Need Me’.

But man cannot live by collaborations and guest spots alone. Smart as Eminem has been to surround himself with such talents (and, ahem, Ed Sheeran, on ‘River’), how does the erstwhile ‘Stan’ auteur’s own part in proceedings stand up?

Surprisingly well, in fact. Get beyond the hackneyed rehashings of his much-examined relationship with Kim (‘Bad Husband’), and the cartoon misogyny of tracks like ‘Remind Me’, (letching over “big old tits” and “an ass that won’t quit” – yawn) and there are some golden moments to be found. The Alicia Keys collaboration ‘Like Home’ is worth the price of the album alone: a surprisingly emotional, passionate and proud defence of America in the face of Trump’s premiership, the track has been rightly lauded elsewhere and is elegiac and heartfelt, angry and lucid.

A seam of rock music - not least on ‘Remind Me’ which uses Joan Jett’s ‘I Love Rock and Roll’ as its bed – runs through the album, from ‘In Your Head’’s heavy sampling of The Cranberries’ ‘Zombie’ (making it one of the more irritating moments) to the riffing guitars on ‘Untouchable’ and the (rather dull) ‘Heat’. For all the childish, brattishness of a track like ‘Offended’, the whiney poor-misunderstood-me complaints (“I feel like I’m a piece of shit”) and the slightly clunky racial politics of ‘Untouchable’, Eminem still – somehow – wields a certain charm.

He’s clearly having great fun on ‘Remind Me’, and the outlandish ‘Framed’ (our hero gets framed – or DOES he? – for a series of gory killings), and the series of letters to daughter Hayley at various points in his and her life of ‘Castle’ is endearing: cute, even. The album closer ‘Arose’ is a ‘Sliding Doors’-style tale when we see his life either ending by overdose or him choosing to flush the pills down the toilet and start over. Like so much of this album it’s surprisingly effective, his apologies to his children and death-bed reminiscences gripping rather than self-pitying. It seems that despite decades of oversharing, self-analysis, bombast, outrage and drama, Eminem does, still, have something to say, as well as the means to say it.