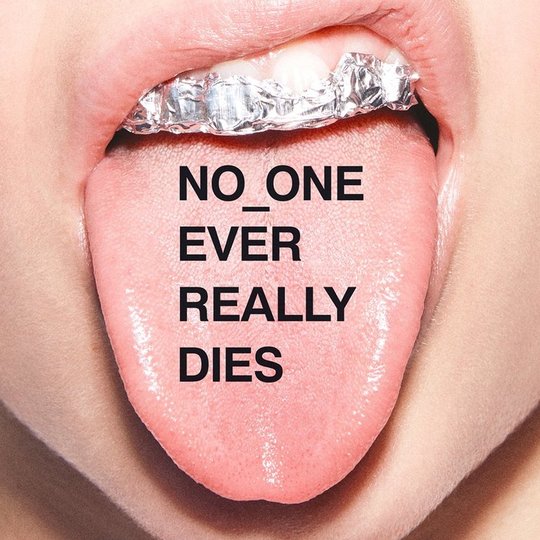 Regardless of whether anyone needed to hear this record, certainly no one needed to make it. It was famously documented in 2003 that, at one point, 43 percent of songs on U.S. radio (and 20 percent in the UK) were Neptunes-produced; the team of Pharrell Williams and Hugo Chavez were having to stagger releases, essentially to stop all their own songs competing against each other in the charts. With a hit-making machine already in place, the addition of Shae Haley to establish N.E.R.D. allowed Pharrell a playground for his more audacious off-cuts. On NOONE EVER REALLY DIES, their first output since 2010’s wildly inessential Nothing, the trio’s meandering avant-rap is somehow more encumbered by its lack of ideas than its lack of editorial savvy.

The cultural and political territory has changed over the past seven years, of course, and N.E.R.D. do their best to update the map they’ve been working from. The album is littered with fashionable co-signs, from modern ubiquities (Kendrick, Future, Gucci Mane, Ed Sheeran) to industry lifers (Andre 3000, M.I.A., the irrepressible Wale). The undoubted highlight comes from Rihanna’s verse on the much-vaunted ‘Lemon’ – Pharrell was talking up the collaboration as far back as 2015 – and with few exceptions, it’s a rare moment when one of the band’s guests doesn’t feel embarrassed to be here.

Pharrell appears to be freshly woke, but it’s a freshness that marks him as artistically new to the subject matter, rather than capable of offering anything insightful or original. ‘Deep Down Body Thurst’ is painful at every point of entry, whether it’s the dreary, sub-Legend balladeering that permeates the track, or its clumsy lyric sheet: "Oh you won’t get away / The way you treat Islam / Oh you won’t get away / Jesus will open his arms." No doubt he’s fighting the good fight here, but surely a man of Pharrell’s talent is capable of doing so in a less cluttered and asinine fashion. Similarly, ‘Don’t Don’t Do It!’ deals with the shooting of Keith Scott by police in Charlotte, N.C. in 2016, and considering the artist occasionally known as Skateboard P was involved in producing Kendrick Lemar’s ‘Alright’, it’s especially sad that this is so flat. Kendrick’s contribution is tight as ever, but does little to rescue the track’s elevator soul from itself; at one point a rock riff appears layered over a ska riff, and it’s a dizzying nadir to an already disappointing experience.

Even for a deliberately loosely-styled group like N.E.R.D., the songs here go on way too long, though it’s often difficult to pinpoint how far back they should have been trimmed when most are already so lightweight. ‘Lighting Fire Magic Prayer’ nearly tips over the eight-minute mark, and again seems to be pitching for something profound. “Hey young fish, doesn’t know that it’s wet, yeah,” Pharrell sings at one point, “Once it swims, it starts drinking, it forgets, yeah?” Yeah. It’s this kind of cod-philosophy (sorry not sorry) that reinforces the nagging feeling that the band feel like they should have something to say, but haven’t quite worked out what or how.

The record’s highlights, when they do arrive, are invariably owed to the featured artists weird enough to put a twist on its recycled bass and beats. Andre 3000 is right at home on ‘Rollinem 7’s’, and the union of M.I.A. and Kendrick on ‘Kites’ could never have been less than a thrill, even if it doesn’t quite live up to the billing. Ed Sheeran sings the hook on a dub track, and that somehow isn’t totally awful; like U2’s cameo on DAMN., they’re sensible enough to use him sparingly. Nonetheless, the calibre of guests reflects that they’re here to boost the album, not the other way around. How different could this have been if N.E.R.D had used their huge influence to promote some new blood, rather than taking a shot in the arm from established acts? ‘Hold the door, what you trying to close it for?’ they ask at one point. Pharrell and co used to be blowing those kind of doors clean off their hinges. It’s sad that their position today feels so much more like a wedged foot.