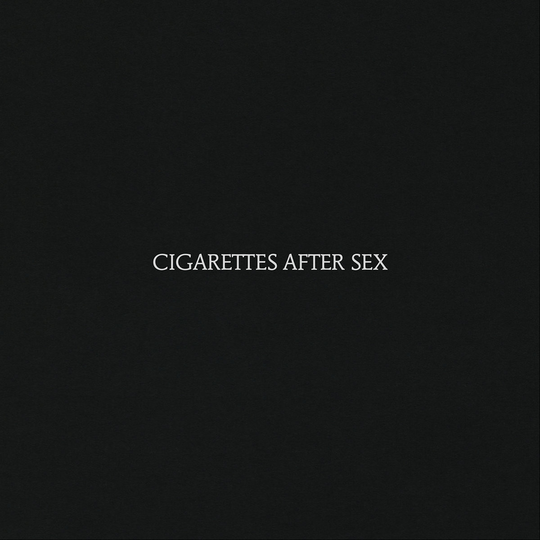 There is a classic scene in Ingmar Bergman’s 1953 drama Summer With Monika where the two young protagonists are nuzzling on a beach together under the sun, and Monika seductively feeds her lover a drag of smoke, tobacco wedged between two fingers.

The name Cigarettes After Sex induces similar cinematic imagery, a black and white view of oxytocin fueled indulgence and lipstick covered filters stubbed in an ashtray on the nightstand. After their EP, I., dropped in 2012, a snowball effect of internet discovery exposed the band to a worldwide audience. The Brooklyn based four-piece, who released their self-titled debut in June on Partisan Records, embraced atmospherics and delivered a plush dream-pop landscape, which proved a fitting noir soundtrack for a name that references such a specific moment. Using that moment as the informing principle for their sound, the album reads as one long afternoon lounge in bed, and each second of the LP melts effortlessly into the next.

Their magical quality of immersion has drawn comparisons to Cocteau Twins and Mazzy Star, at times even reflecting the warm haze of ambient and minimalist electronic compositions. The band counts Shirley Manson (they opened for Garbage in 2016) and Françoise Hardy as fans. Songwriter Greg Gonzalez has successfully delivered both the make-out album of the year and vocal performance of 2017 in one take, nearly ten years after the project originated in his hometown of El Paso, TX.

The opening track, 'K', gives the listener an accurate representation of what to expect throughout the record: gentle arrangements, classic waves of large reverb and a hushed, subdued vocal delivery. Each song rests comfortably on stripped down drums that at many moments recall the softness of Red House Painters’ 'Katy Song', moving along at the pace of what feels like codeine-laced bliss. A tongue-in-cheek reference to his lover being "The Patron Saint of Sucking Cock" on “Young & Dumb” delivered in the same sincere manner as the rest of his odes makes certain lyrical musings difficult to take seriously or even interpret at all. The general feeling of these moments isn’t vulgar (or even arousing), but rather invoke a stream of consciousness prose reflecting on the candid nature of casual sex in the modern world and a jest at the sensual status quo. There’s an honest and raw element lent to Gonzalez’s croon which keeps lyrics like “I was meant to love you” (“Opera House”) from sounding too cloy or stale. The vocals seem to stagger on the edge of tenderly cracking at times and synch with the gentle dance of the melodies and slinky baselines throughout the 11 tracks. 'Apocalypse' provides a glimpse into another amorous melody, beginning with reflective guitar notes that seem to tug forgotten memories to the surface. It’s rare to find these layers of lovesick and ethereal echoes that do not drown out the distinctive quality and tone of storytelling. Some of these stories are not fleshed out as poetic or romantic as the music might suggest (see: “…where the girls are young and dumb and hot as fuck” – 'Young & Dumb'), yet it’s forgivable in the sense that Cigarettes After Sex successfully transport you to an erotic world entirely their own.