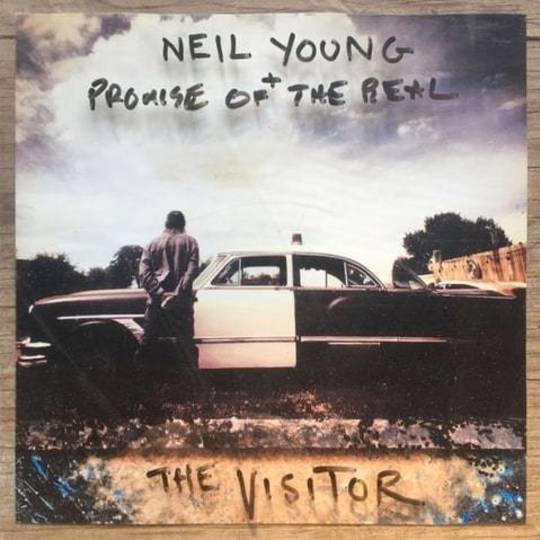 Neil Young is, deservedly, revered as one of our greatest living songwriters. Nevertheless, when an artist, even of his stature, sets about releasing his thirty-ninth studio album the initial response and subsequent reviews can err on the side of being dismissively polite. Quite rightly there’s an increasing focus on redressing the balance of race and gender in the music industry, but there’s rarely a thought for popular music’s ageist tendencies. There’s no doubt that energy should be focused on supporting new talent, and that too often the business relies too heavily on bankable stars, but it’s counterintuitive to dismiss the work of older artists, who have seen a thing or two in their time.

Of course, a new Young album is guaranteed a sizeable audience, but whether his latest ruminations will encourage meaningful engagement and not be quietly viewed as a heritage record from an old timer is debatable. It has been fantastically encouraging to witness so many passionate and politically engaged records produced by young artists this year, and it’s equally inspiring to hear the perspective of older ones, who have refused to give up. The anger and ferocity expressed in records by artists like Algiers, Nadine Shah, Downtown Boys, and Idles - to name a few - have been bracingly necessary. But so has the measured, hard-earned perspective of luminaries like Mavis Staples.

All of which would be irrelevant in this case if Neil Young had produced a dud with The Visitor. And it’s not as if he’s beyond reproach, as 2003’s rock-opera Greendale will attest. One of his many strengths is the continued ability to ruffle a few feathers whether it be through the aforementioned concept experiment or the raw, noisy dalliances of, er, Le Noise. The Visitor is unlikely to elicit such extreme reactions, but it is curiously and enjoyably irregular. Young has always explored and played with genre, but perhaps not with as much variety on one record. Lead single ‘Already Great’ offers familiarity with its Crazy Horse-esque distorted guitars and inherent swagger, whereas ‘Carnival’ transmits bossa nova rhythms, and ‘Diggin’ a Hole’ dips into swamp draggin’ blues. But the biggest shock comes in the form of ‘Children of Destiny.’

The track is a faintly ridiculous show tune. Yup, you heard that right. Interestingly, its absurdity is half of its charm, coupled with its unabashed positivity, and an acutely touching vocal from Young. In the face of crumbling democracy, threats to freedom, and general tyranny he gently, yet poignantly, asks, “What would you do / what would you say?” Evidently, the onus is on us, the listener, but if you’re struggling his chorus is at hand with a not-so-subtle hint, “Stand up in what you believe / resists the powers that be / stand up for democracy.” On the surface, it’s not Young at his most poetic or original, but in a small sense, the lack of snarky irony and abundance of sincerity is this songwriter at his subversive, rabble-rousing best.

Much like Staples’ latest effort, Young largely retains an even-temperedness and encouraging viewpoint throughout. ‘Already Great’ celebrates the positive aspects of the U.S.A (“I love this way of life / The freedom to act and the freedom to say”), highlighting the urgency of the fight against the Trump administration and its destruction of those freedoms (“No wall / No ban / No fascist USA”). That’s not to say that Young isn’t capable of more pointed and angry moments. ‘When Bad Not Good’ mischievously turns Trump’s own call to incarcerate Clinton against him in unforgiving fashion: “Come on / lock ‘um Up / He lies / you lie.”

The players in Promise of the Real and the naturalism of the record’s production lends a real sense of pragmatism to Young’s thoughts. And those ideas are constructive ones. They might often seem obvious, but that’s not to say we don’t need reminding of them from time to time. The quietly potent ‘Change of Heart,’ is an ode to openness as a means of change, which advises, “talk to the people / they know the truth.” And that means all the people; young, old, rich, poor, those of colour, gay, straight, trans - hell, even Daily Mail readers (you never know, they too might have a change of heart). The point being, don’t give up: at 72, and arguably an old man, Neil Young hasn’t.