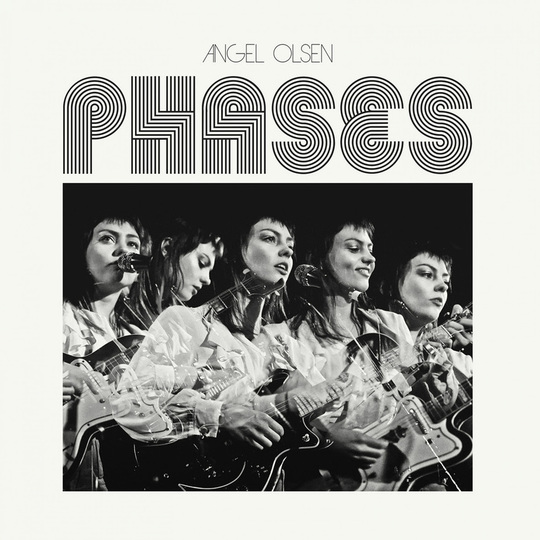 Riding the wave of two hugely successful albums, Angel Olsen has risen to become one of indie rock's more unlikely stars in recent years. I say unlikely because her folk and country indebted sound isn't exactly the most "trendy" of influences going into a genre enjoyed largely by hipsters, though her full studio albums Burn Your Fire For No Witness and MY WOMAN saw a move more towards zeitgeist indie-rock. Her earlier EPs and debut album, 2012's Half Way Home is where you will find the Asheville, NC-via-St. Louis singer-songwriter's original influences.

Phases then, is a rarities compilation album which largely exists to show Olsen's musical roots. It's not to say they've disappeared since signing to Jagjaguwar, but certainly, a wider-screen production sheen has blown her sound up to IMAX scale, with mostly terrific results. Bar a couple, however, Phases collects Olsen's quieter, more introspective moments that harken back to her original solo material. As is always the case with compilation albums that jumps between different periods of an artist's career (although this one roughly starts from the present and works backwards) but in fairness, this is also to do with Olsen's varied vocal and style range.

Opener 'Fly on a Wall' was the first track on Secretly Group's Our First 100 Days fundraiser compilation - a protest album to Trump's first 100 days in office raising funds towards social causes under threat from Trump's administration - this year and may well have been the inspiration for the b-side album's existence in the first place. As a song, it builds through a drudgerous marching drum-beat, eliciting a tension which seeps in and out of every song on here. New single 'Special' segues nicely after, with a trippy, psychedelic slow-burn of a track which best describes Olsen's current sound.

At times, one can be forgiven for thinking Places is a compilation of the Sixties and Seventies' best female folk artists. Olsen's endlessly vintage sound, while managing to stretch her voice in many different forms, makes the record sound like switching the stations of various rust-belt country music radio stations in the US. There are of course elements of the greats, like Joni Mitchell or Carole King, but Olsen still manages to sound distinct within all these switching masks and modes. 'Sweet Dreams' for instance has all the sun-drenched "trips" akin to 'California Dreaming' all through the lens of half a century later. Meanwhile on 'California' Olsen uses vocal vibrato to envoke not a "literal California" but a comforting friend or feeling such a place carries.

In the compilation's latter half, Olsen goes super lo-fi, much like Springsteen's tape-machine recorded Nebraska. 'How Many Disasters' is a newer cut, and its cleaner production shows, but 'Tougher than the Rest' (a Springsteen cover) and 'For You' proudly displays their audible tape hiss. Final couplet 'May as Well' and 'Endless Road' especially remind one of an older generation of songwriter, an obsession Olsen herself has auto-biographically mentioned from her childhood. While rarity albums have a tendency to scream FOR HARDCORE FANS ONLY, Phases is a useful entry into Olsen's back catalogue with heavy stress on the 'back'. For those new to her work, this is a good introduction to her older work, and moreover, yet another example of her incredible talent as a storyteller and composer.