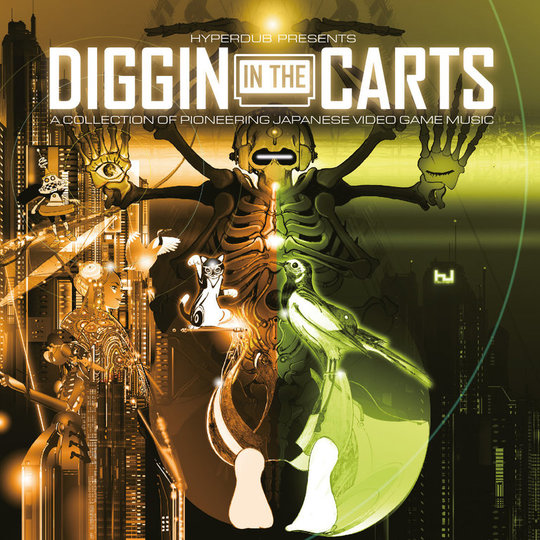 Back in 2014, Red Bull Music Academy created a series of short documentaries charting the rise of video game music, from its earliest sounds and melodies and fully-formed soundtracks used in the arcade games of Namco, right through to the end of the chip era in the Nineties with the development of 32-bit and CD technology. As video games found their feet, developing from the simplicity of Pong to the Nintendo Entertainment System, Sega Genesis and beyond, so these pioneering composers also added to the increasingly vibrant worlds with their accompanying soundtracks.


Nowadays, big-budget titles will often accompany their next-gen graphics with lush, dramatic, often orchestral numbers, while games such as Grand Theft Auto will use well-known tracks to make their worlds seem more immersive and realistic. Even Final Fantasy has treaded into the world of popular music, with the likes of Florence + The Machine providing theme songs. But lately there’s also been a popular resurgence of games that hark back to the 8 and 16-bit era of gaming, from Shovel Knight and Undertale to the recent fan-made love-letter to the blue blur, Sonic Mania.

Now is therefore a good time to dive back into the earlier days of game soundtracks. Curated and researched by the documentary series’ writer and co-director Nick Dwyer and Hyperdub label boss Kode9, Diggin’ In The Carts: A Collection of Pioneering Japanese Video Game Music delves into some of the rarer archives of the chip era, emerging with deeper cuts from systems such as the Famicom and Super Famicom, MSX, and the PC-8801.

Diggin’ In The Carts doesn’t, therefore, take in the familiar sounds of Super Mario Bros or Legend of Zelda; there’s no trips to the Mushroom Kingdom here. Instead, the most well-known games represented here are probably the RPG-come-city building simulator ActRaiser and side-scrolling beat ‘em up Golden Axe II: The Duel. It doesn’t matter that these tunes might not be instantly recognisable to all but hardened gamers though; instead, this simply means that it’s easier to appreciate the sheer diversity of sounds on offer here.

To get around the limitations of each system, the composers would go to great lengths, from customising their chips to artificially boost the capabilities of the hardware to developing their own computer programmes to develop their own unique palette of sounds. As such, Diggin’ In The Carts presents an extremely diverse range of electronic music. The only track here that bases itself almost entirely on the 'classic' chiptune sound is ‘BGM 3’ from Motocross Maniacs but even here the sheer tempo of the track puts you at the centre of a heart-pulsing race to beat the level before the computer. That sense of action and kinetic energy shrouds other tracks too, such as the frenzied harpsichord and sweeps of gushing water that define Kazuhiko Nagai’s ‘Keel’ from the aforementioned Golden Axe II.

More than anything though, the tracks evoke a sense of atmosphere and contribute to world-building even when you haven’t picked up the controller. The blocky, wood-like percussive elements that punctuate Hiroaki Yoshida’s piece ‘Kyoushin’ for Dragon Gun gives the sense of being trapped within the ‘Lunatic Forest’, its cascading synths capturing a descent into madness. Meanwhile, Tadahiro Nitta’s piece for Illusion City helps conjure the dystopian setting of the RPG with its extremely mechanical, almost industrial nature – even if you had no idea this was for the ‘Metal Area’, you’d still be able to take a guess.

At the other end of the scale, Jun Ishikawa’s ‘Main Theme’ for Alcahest – a top-down SNES action game developed by Squaresoft and HAL not too dissimilar to The Legend of Zelda – sets the player up for an epic adventure through its approximation of orchestral music, using electronic strings and bursts of brass-like sounds to inject a sense of grandeur. Katsuro Tajima’s ‘Exercise’ track for Tetris-like puzzler Mega Panel ramps up the intrigue with its minimalist, almost Middle-Eastern vibes and an introduction that pays homage to Ennio Morricone. Side-scrolling, run-and-gun Mega Drive game Alien Soldier might not be the obvious choice for an intriguing, thoughtful piece, but Kazuo Hanzawa’s ‘Oblivious Past’ evokes the feeling of a sudden revelation.

Some of the most intriguing tracks though come from some unexpected sources. Soshi Hosoi turns experimental with the track ‘Mister Diviner’ from The Majhong Touhhaiden, drawing inspiration from minimalist composer Steve Reich. The result is a track made up of relatively fast-paced arpeggiated tones that could only make the act of playing a virtual game of Mahjong surprisingly sweat-inducing. Tarot Mystery was Yasuaki Fujita’s final project for the system, but on the strength of ‘What Is Your Birthday’ he didn’t hold anything back. The swirls of cosmic synths and slight tonal shift introducing beats make this apparently simple question seem like it will have even more impact on the final outcome of the divination.

Should you fail on mecha-based TurboGrafx-16 strategy game Hisou Kihei X-Serd, then you’ll hear Goblin Sound’s ‘Game Over’ music. It’s unsurprisingly melancholic, but its wistful, fluttering melodies somehow encourage the player to hit the continue button. That’s essentially the feeling that the whole of Diggin’ In The Carts conjures. From high drama to mystery, tension to grandeur, just about every feeling and emotion is touched upon in the 34 tracks on offer. It doesn’t matter whether you’re a seasoned gamer or simply interested in the genesis of electronic music; the innovative, evocative sounds on offer here will transport you to distant, vibrant pixel-based lands.