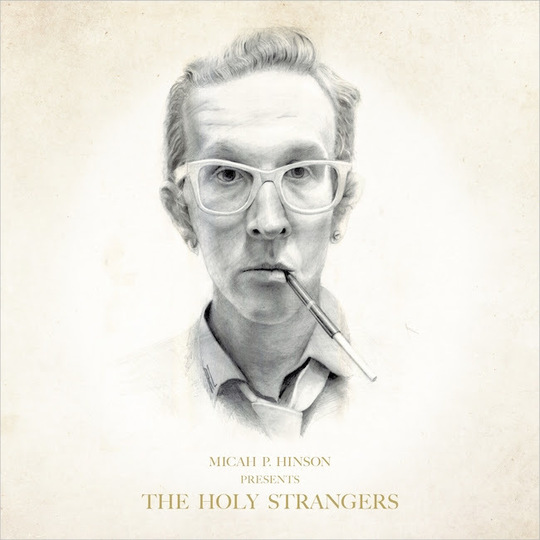 Micah P Hinson is one of the last great proprietors of the good ol’ fashioned concept album. The Abilene, Texas native has been producing these formulated albums for well over a decade now, perhaps never more successfully than on this seventh full-length. Hinson himself describes it as a 'modern folk opera', an immediately daunting and eyeroll-inducing combination of words, but for once this album seems to rise to the occasion.

Micah P Hinson presents The Holy Strangers, in a very real sense, a record rooted in tradition. Hinson takes great pride in recording his music on vintage, analogue equipment, be it antiquated reel to reels or surviving Yamaha desks that remain lying around in his Denison, Texas studio. It lends the music a trueness that marries well with the storytelling technique that Hinson adopts throughout the album – relying on the tried-and-tested, handed-down systems of setting a scene and conveying a message.

The album at its core tells a chronological story of the struggles and glories of an everyday Americana family battling through love, war and death, but climaxing in a macabre, grand guignol final act that befits the operatic tag that Hinson himself has invoked. Opening with a gentle swirl of an instrumental, perhaps designed to represent birth, the album blossoms into life with ‘The Great Void’, the story of growing up, a strangely mournful, weary take on the subject, as if in expectation of a lifetime as full of hardship as of joy.

Certainly nothing up until that point prepares you for what comes next, a jaunty Johnny Cash pastiche named ‘Lover’s Lane’ with Hinson’s bass-baritone voice telling the tale of our protagonist falling in love. ‘Oh Spaceman’ is at first an incongruous next chapter (“Oh spaceman, so glad to greet you/We’ve been looking for your ship since we heard you were coming”), the analogy somewhat unclear until Micah drops the sound of a crying baby into the mix near the song’s end.

The album is defined by an extraordinary seven-minute spoken word piece at the half-way mark. Titled ‘Micah Book One’, it is a personal judgement day for our character, a headlong collision of politics and faith. Our protagonist strikes a defiant, almost messianic pose, taking it upon himself to write his own scripture, as the song title suggests, at one stage speaking of some holy war against “the house of Israel”. As ever, the temptation is to read it as an attack on the current US administration or at least representative of the twenty-first century disillusionment of a man in the face of his lost faith in his gods and leaders, but with such a specific story being told, such generalisations might be a stretch.

The insinuated war becomes reality in the next track, a fourth instrumental in the album’s first eight songs, featuring a repeating piano note apparently sounding out like a death toll. As the album moves into its final act, all has turned sour: on ‘The Darling’, his relationship has fallen apart and his heartbreak is laced with a threat of violence. After a spiritual reckoning of sorts in ‘The Awakening’, complete with a sample of a preacher’s sermon, our character appears to bring a terminal end to his love story on the string-laden funereal ‘The Last Song’.

We move into the ominously named ‘The Memorial Day Massacre’ gingerly as listeners, and the squalling violins at its outset do little to allay our worries. Hinson does leave the specifics of the storyline to our imagination here, leaving us to wonder whether this is a direct follow-on from ‘The Last Song’ or if our character is following through on the threatening talk from ‘The Darling’.

‘The Lady from Abilene’ follows, a track that deliberately wrong foots you with its upbeat, plucked country energy - it is in fact the most harrowing story yet told on the album. To explore the details of the narrative would be akin to indulging in a movie spoiler, such is the strength of Hinson’s long-form storytelling. Suffice to say, Stephen King would be shocked. We finish with ‘Come By Here’, a dark interpolation of ‘Kumbaya’, a tragic final act to Micah’s brilliant modern folk opera, a very literal plea for salvation.