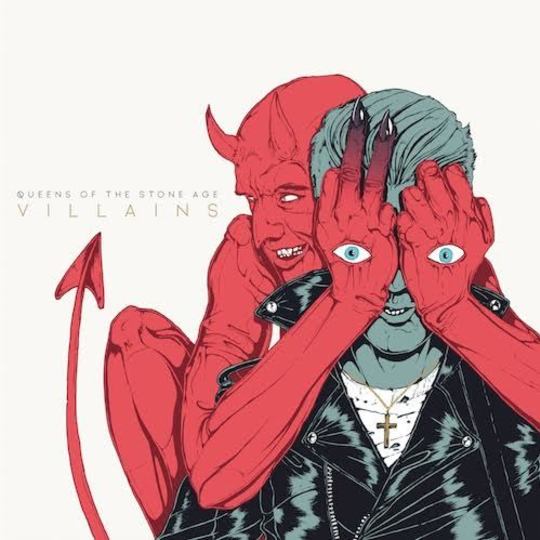 There’s a debate raging at the moment about what’s happened to critical music writing.

What’s happened to it is that life’s too short to pour out bile at something you dislike when you write for free in your spare time, usually late at night or around your actual job, simply for the love of the music. Most of us would rather give things which we care about a platform, and champion causes or stories we feel need highlighting, only sticking our oars into the already oil-slicked seas of the internet to review something we’re fairly sure we’ll at least find interesting, before catching some sassy shade in the cataclysmic depths of the comments section.

Such is the case with this latest offering from Queens of The Stone Age, surely a band that any music fan has at some point in their lives been familiar with, perhaps even loved, maybe even obsessed over. The problem, as we are about to discover, is that with seventh album Villains a band who were once a vital, experimental and dangerous force have just become a little – and it very much pains me to say this – boring.

‘Feet Don’t Fail Me’ is as fine an opener as you could hope for - a groovy, funk driven piledriver that swaggers its way across the dance floor after a deliciously fraught intro. The beating of war drums, the atmospheric layering of guitars and synths, shamanic chants – it all lends to the feeling of a futuristic Wild West epic that opens coolly out into a hip-swaying, snaking riff. The first stumble of the record does, however, appear early, in a confused middle eight which breaks the song down and fails to ever restart the engine in any exciting fashion.

Despite initial scepticism, kudos has to go to Mark Ronson on the album’s production – a clever mix of retro and contemporary sounds and a blend of digital and analogue technology, which he’s utilised so well to great effect over the course of his career, and works perfectly. Perhaps predictably, the guitar tones on this record are pretty fucking delightful. Late album stomper ‘The Evil Has Landed’ delivers a selection of noises so deliciously evil that it’s easy to imagine they could be used to charm Cerberus into opening the gates of hell.

The wonderful, staggering opening riff of ‘Domesticated Animal’ stumbles across the record like an intoxicated addict, and the thickened rhythm section accentuates that hypnotic, circular blundering as Josh Homme spits punctuated words like bullets from a semi-automatic rifle, climaxing in a tense crescendo that’s bolstered by a throat-shredding backing vocal.

“Pretty pets were once wild. Domesticated love slave, give us a smile…tell us where you keep the gold, we want to help you rule the world. We promise we won’t tell a soul, so tell us where’s the goddam gold. I’ll tell you where the gold is, it’s in the ground. You wonder where’s the freedom, it’s in the lost and found.”

Songs clock in at five or six minutes long on average - fine if they hold the attention, but if you’re going for something a little more sprawling, you still need to take the listener on a journey. ‘Fortress’ is perhaps their best effort in this regard as the band step gleefully into the world of space-prog, all whirling Moog, walking basslines and angelic Seventies vocals that bring to mind The Stranglers on finest form. That being said, by the four minute mark you’ll be drumming your fingers and eager for the resolution.

QOTSA have always been a band that liked to draw out and self-indulge on those hypnotic grooves, but this record leaves you with the feeling that it’s a side of their songwriting which works best in the live setting – but hey, what’s the point in being a band if you can’t indulge in a little of what pleases ya? Annoyingly though, the more traditionally structured ‘Head Like a Haunted House’ is the perfect bite-size length, but is a bit of a QOTSA-by-numbers throwaway, bar some absolutely lip-smacking bass runs and lead guitar work. Does this band still have something to say? Undoubtedly. Is their music still capable of being fresh, exciting and experimental? In places, absolutely. Unfortunately, the fact of the matter is that the likes of ‘Hideaway’ end up sounding like cutting-room-floor rejects from the True Detective or Luther soundtracks.

The album’s closing track ‘Villains of Circumstance’ is the most revealing glimpse into a direction that could really work for the band in future. Channelling the likes of Lou Reed, Nick Cave and Tom Waits by way of Alphaville’s seminal Eighties new wave anthem, ‘Forever Young’, it’s a recipe which sounds completely insane, but works like a charm. It is of course maybe inevitable that QOTSA have mellowed with age, and yet you can’t help but feel there are still ways to be thrilling in this more understated and reserved manner. Maybe they just haven’t quite cracked that particular coconut yet.

Villains isn’t a terrible record, but it’s not a fantastic record either, and that’s perhaps the least kind thing that could be said about new material from a band which we’ve come to expect a lot from. Therein lies the other answer to the question of why most of us choose to write about things we love – because who wants to write about something that’s 'okay', much less read about it, or listen to it?