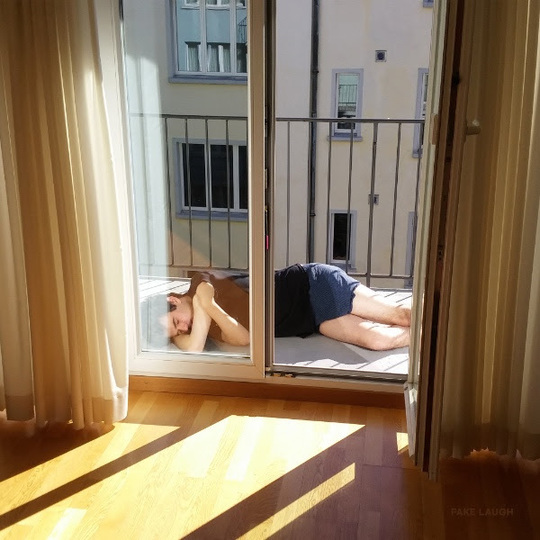 Fake Laugh has been a side project for Kamran Khan for a few years now. The London-based, Berlin-born musician has been playing in both Japanese Hour and Lovepark, but last year’s two EPs, Great Ideas and Ice signalled the growing seriousness of the project.

The album itself is a step forward sonically; the production, handled by Theo Verney, is crisp and light, with the muddiness of early recordings cleaned off. The clearer audio gives new life to the number of songs on the album that have been re-recorded. Around half of the tracks on the album first heard the light of day on Fake Laugh’s debut EP Freely in 2014. The old harshness has been stripped off, taking the polished guitar-pop to the next level.

It is on Khan’s vocals where this is most notable. Simple, but emotive, his voice sounds lazy and whimsical, but packs the sounds of longing and angst that bring the songs to life. It breathes both feeling and humour into various lines on the album, notably on ‘Short of Breath’ like “You’re the one that I trusted and cared for most,” Khan pines, before adding as an afterthought, “apart from me”. Combine that with the song’s cascading guitars and heart-wrenching chorus, and it is one of the most captivating song on the album.

Like the EPs, Fake Laugh has a defined and recognisable sound, a heady mix of Brian Wilson and Mac Demarco, but with every song having such a similar sonic pallet, it means some of the tracks get lost, exposing some of Khan’s weaker songwriting. When it works, as on the aforementioned ‘Short of Breath’, it really works. ‘As I Get to Know You Better’ is a similar blend of humour and heartbreak, opening with Khan deadpanning “As I get to know you better, my respect for you declines” before he strays into a falsetto for the chorus. ‘Wouldn’t Bother’ as well kicks it up tempo-wise and has a beautifully melodic riff that’ll stick in your head. But it is easy for some of the songs to blend together on initial listens due to the sonic similarities This might mean that it would be easy to put Fake Laugh on as background music and let the dreamy guitars wash over you, not fully engaging.The sounds are nice enough, but some of the songs do not seem to warrant a relisten. But to do so would mean that you would miss out on some Khan’s fantastic lyrical turns of phrases, the earnestness and the humour which lies just below the surface on all the tracks.

A solid, if uneventful debut album, full of heart, soul and charm that fans of dreamy guitar-pop need to listen to.