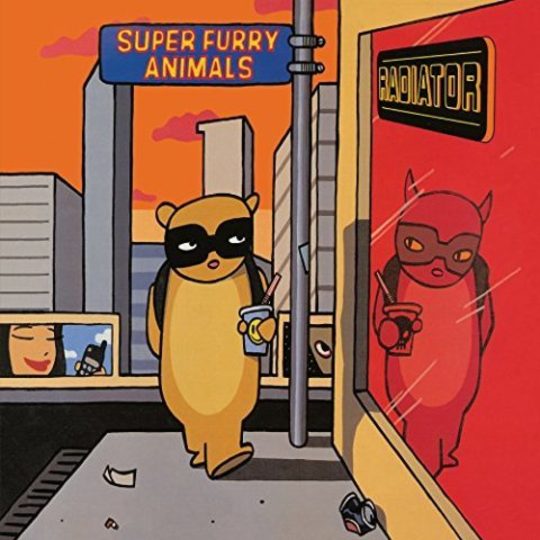 When Super Furry Animals announced they'd be playing their first two albums back-to-back throughout December last year it provided both long term fans and curious bypassers with an interesting conundrum. Despite both records coming out just 14 months between each other, the chasm from a sonic and structural perspective couldn't have been any wider. Released in 1996, Fuzzy Logic was a more immediate affair, a captivating and altogether collection of songs that would remain firm favourites throughout the band's career. The compositions that might have fitted in with the Britpop zeitgeist, but their creators clearly had a vision way beyond most of their peers.

On the other hand, follow-up Radiator, released the following August, represented a sea change for the band. Always with one eye on the future, exploring new possibilities and never constrained by boundaries. This was possibly the beginning of Super Furry Animals voyage into territories very few bands with mainstream credentials had transgressed. While the encounters on Radiator weren't too drastic in the first instance, by the time the second half of the record reached its climax, it was clear this was no ordinary band prepared to rest on its laurels and churn out the same old safe retread of what's gone before every two years ad infinitum.

No, Radiator was a brave move in an era where very few guitar bands took chances. Especially ones signed to a high profile independent like Creation where units sold and chart positions were key in an industry spending money like it had gone out of fashion at that point. It's perhaps interesting then going back to those shows in December 2016, because while both albums could be pinpointed as arguably the two most important in Super Furry Animals entire back catalogue, the delivery and response at said gigs (or certainly the ones DiS attended) seemed to veer not so much from album to album but from side to side of each record. Indeed if each part of the performance was divided into four quarters rather than two complete albums and a clapometer or other object of sound recognition placed within the audience each would perhaps tell their own story.

So onto the album itself. Recorded over a three month period in a bungalow just down the road from an RAF training school in North Wales with Gorwel Owen who'd also worked on the band's debut, Radiator proved an altogether more experimental affair. Not least in the band's continued embracing of new technology and production methods that gave the record a more futuristic sheen than pretty much any other record around at the time. Sure, there's a correlation of sorts between both Radiator and Fuzzy Logic, particularly in the shape of singles 'The International Language Of Screaming' and 'Demons', the pair of which formed slightly kindred spirits to 'God! Show Me Magic' and 'If You Don't Want Me To Destroy You' off their debut.

However, its lead 45 'Hermann ♥’s Pauline' that exemplifies Radiator's audacious nature while highlighting a significant departure from what had gone before. Telling the story of Einstein's parents while referencing Che Guevera and asthmatics among other things, it became one of the most unconventional pieces of music to hit the singles chart that decade while declaring Super Furry Animals as the unruly anomaly in Britpop's linear trajectory. It may have been the first song to be publicly aired from their second album three months prior to its release but when that record arrived, it found itself tucked away at the start of side two which housed the band's most ambitious compositions to date.

Interestingly, only album closer 'Mountain People' still survives as a live staple from Radiator's second half, compared with pretty much all the songs on the flipside – which further illustrates the band's meticulous attention to detail in the studio when crafting this record (rather than the no-nonsense live approach orchestrated during Fuzzy Logic's often arduous sessions). What makes this twentieth anniversary deluxe edition even more appealing is that the bonus disc - essentially a collection of demos recorded at Cardiff's Big Noise Studios in December 1996 prior to laying down the sessions that would become Radiator - traces many of the album's key moments from rehearsal room to finished article in three simple steps.

Take 'Play It Cool' for example which makes three very different appearances here. While its finished format is instantly recognisable as Radiator's rather appropriate midpoint and perfunctory fourth (and final) single, the other two versions that appear here sound markedly different. Almost like building blocks eventually tracing the song's development from cutting room idea to fully fledged composition in the process. The same can be said of 'Naff Gan', itself recorded during those Big Noise sessions at the tail end of '96 only to be shelved until finally reemerging amidst several face lifts as 'Ice Hockey Hair' some 18 months later.

Elsewhere, the deluxe edition also collects the various b-sides and bonus tracks that accompanied Radiator's four singles, all of which demonstrate Super Furry Animals tenacity in maintaining standards on each and every release, thereby ensuring very little filler ever appeared on any recording. The aforementioned Ice Hockey Hair EP is also included, again drawing another line in the sand with the Super Furries already embarking on pastures new. Perhaps the most intriguing of the 44 tracks compiled as part of this package is an eight minutes long reworking of The Smiths classic 'The Boy With The Thorn In His Side'. Originally intended for release as part of a Smiths tribute compilation CD given away free with a French music magazine that never saw the light of day, this largely instrumental and mostly electronic take could easily be one of the most unique interpretations of any original composition out there.

Of course as with its predecessor, Radiator retains both a charm and innocence about it that was all too rare from its contemporaries back then. Timeless in stature if perhaps a little more difficult to digest as a whole than Fuzzy Logic, there's more than enough bonus material on offer to make this an attractive proposition which while being an essential addition to any Super Furry Animals completist's collection, is worth the time and attention of any casual fans that may pass by too.