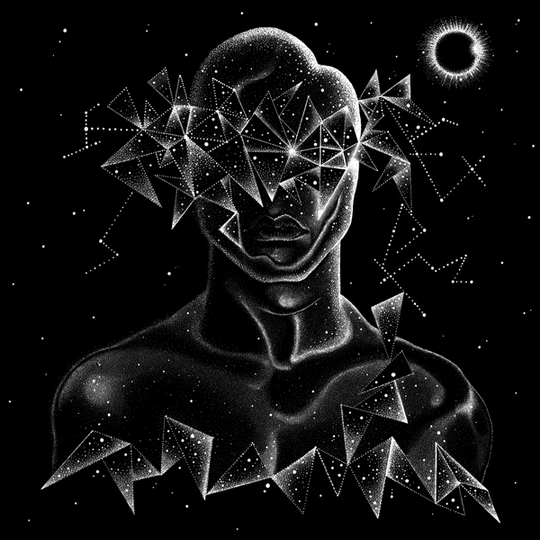 Israel Butler and Tendai Maraire, better known as *Shabazz Palaces, have always done things at their own pace, in their own style. Possessing the distinction of being Sub Pop’s first hip–hop act, no one else really sounds like the former jazzists from Digable Planets. Right from their gorgeous full-length debut, 2011’s Black Up the duo announced themselves as out of this universe aliens who understand the human condition more than anyone else with their starkly minimalist sound played through a hadron collider of echo. The follow-up, 2014’s Lese Majesty, while still consistent, Didn’t quite shock and awe in the way it’s predecessor managed, however, there was little denying the group’s unyielding ambition.

That ambition now seems realised on this, their first double album, Quazarz: Born on a Gangster Star and Quazarz vs. The Jealous Machines, an epic exploration of technology, rap music and contemporary America. This double suite sees Butler play 'Quazarz', a sentient being from another universe sent to the opaquely titled 'Amurderca' and find a violent, unwelcoming place where everyone is reliant on machines. Sound familiar?

While broadly speaking these third and fourth albums by Shabazz Palaces are what audiences have come to expect from them musically, this big concept is both at once an excellent means to explore some significant themes but all in keeping within the duo's musical universe. Melodies, samples and rhythms largely drift in from the ether, like passing asteroids from the video game of the same name, with your more traditional song structures happening as anomalies such as on ‘Moon Whip Quaz’ or 30 Clip Extension’. This is partly because the duo write and record much of the music on live instruments as opposed to sequencing or sampling, meaning they are able to create their atmospherics naturally.

The common thread that flows through both albums make it an easy experience to listen as a whole, and while the concept of a double album can be off–putting for some, these records shift and weave so seamlessly that one barely notices the combined one hr 30 runtime. That said, it is a record that rewards repeat listens, as its length and depth are well worth letting wash over you.

Born a Gangster Star is the intentionally more disorientating of the two records, introducing a strange new world where outsiders like Quazarz immediately feel alienated. As has become Shabazz Palaces' calling card, spacey hip–hop rivals more traditional jazz to create the sense of confusion inhabited by the 'alien' experience. ‘Shine a Light’ is a very rare example of a more traditionally minded rap song in terms of its use of classic soul music samples. Meanwhile ‘Parallax’ is for all intensive purposes a jazz fusion song, especially due to its drum sample. Elsewhere ‘Fine Ass Hairdresser’ blasts gun culture while ‘The Neurochem Mixalogue’ teases an almost unthinkable auto-tuned RnB track before giving way to one of Butler and Maraire's best and most sinister beats.

Meanwhile, …vs. The Jealous Machines is easily the more direct of the two, announced instantly by opening track ‘Welcome to Quazarz’ where a character from the aforementioned Amurderca details his brutal country, surmising that “here, we kill”. Meanwhile, ’30 Clip Extention’ runs down lazy rappers and the macho attitudes which feed into “Amurderca’s” violent motives. But, there are moments of beauty too as ‘Efferminence’ shows, finding a strange comfort in people’s connectivity. Similarly the hilariously titled ‘Love in the Time of Kanye’ is a genuinely sweet love song which gives the record/s a beating heart.

Not everything is as memorable as everything else and there are a few tracks which perhaps have a tendency to meander a bit too long, but these do not take away from the overall feel of the album, more just drift off into space as is the predominant feeling of the two records. Finale ‘Quazarz on 23rd' leave things as ambiguously as where we started proving there is no easy answer to the current state of America. Nor should Shabazz Palaces be expected to find them or really be interested in them. This is a snapshot of a crazy–quilt country seen through the eyes of an 'alien' which in the contemporary, real political climate is currently a very scary position to be in indeed. Instead, the Quazarz albums are a fictionalised framework to comment on the real-life myriad parts of the modern world, especially America, and work thrillingly well as such. There remains to be no one else like Butler and Maraire and may their idiosyncratic approach to music and society at large continue if we continue to get such thrilling records as this.