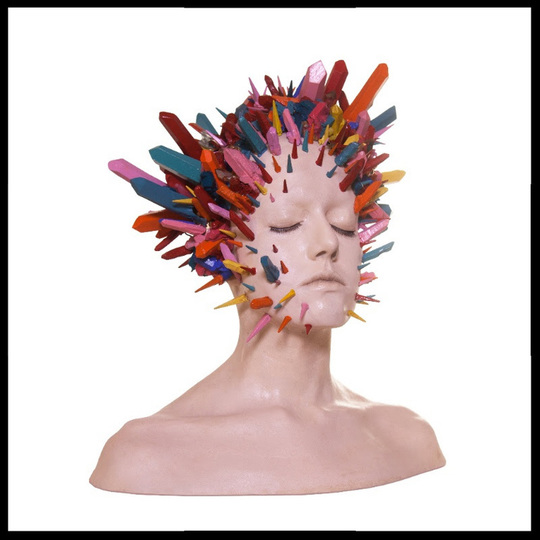 If writing is about making sense of the world around you, Pixx is a fully-fledged craftsperson of the modern age. And what is art for if not attempting to find comfort in shared feelings – be they jubilance or distress? Anything released in 2017 is surely going to have a smattering of uncertainty, even if it’s coming from a BRIT school graduate who resides in leafy Surrey. And Pixx’s synth-fuelled pop offering doesn’t shy away from that.

WH Auden’s The Age of Anxiety, the 1947 book-length and Pulitzer Prize-winning poem cuts at the heart of this documenting of change, as it attempts to charts one man’s quest to find substance and identity in a shifting and increasingly industrialised world. Auden’s poem inspired music: first, a symphony, The Age of Anxiety (Symphony No. 2 for Piano and Orchestra) by Leonard Bernstein; then a 1950 ballet by Jerome Robbins. Now, 21-year-old Hannah Rodgers, AKA Pixx, has taken the name for her debut album.

It’s a phrase Rodgers found in a notebook given to her by her brother, Luke. Without having read Auden’s poem the words have allowed Pixx the space for all kinds of ruminations.

‘I Bow Down’, the album’s opener and easily its stand-out single, hits a heavy punch. Its beats are incessant, as is Rodgers’ deep and soulful voice. Her vocals sound so full of ease, despite the churning rhythms underneath her, the whole sound forming a haunting synth drive. It’s a very danceable song. But you hardly get the sense that Pixx wants you to dance, or at least particularly hard. With “I salute your kindness / I bow down to your good will”, she is expecting more of a standing to attention. It’s a resounding sound to open a record, even its title succumbing to some greater force.

Without a doubt, Pixx can write a good pop song. ‘Grip’ and ‘Romance’ follow in a similar vein, the perfect balance of youthful lyrical querying and uncertainty thrashed up against a four-to-the-floor beat and wistful keyboard melodies. The electronica on this record leans just the right side of ethereal.

Having signed to revered indie label 4AD at just 19, Pixx’s 2015 Fall In EP was already showing tinges of anxiety-fuelled lyric sessions. Moving these vocals onto the faster-tempo, heavier-beat tracks has given her the backing to make a fun synth-pop with a lightning bolt of reverence, where the catchiness of these songs lies as much in the lyrics as in the relentless synth-pop melodies. These are lyrics which could be just as much about a personal fall-out as they could the end of humanity as we know it. Who says there’s a difference?

Holding down lyrical matter which often floats in the air are drum machines and timers, and the production of the whole record is incredibly clean. Sometimes a shininess works. At other points I can’t help feeling a little more griminess would be more apt for the subject matter.

After Pixx herself “bows down” on the first track of the record, on ‘Telescreen’ Pixx’s subjects “sink down” and “fall down” before, ultimately, returning to “bow down” much like she does. I can’t help wondering whether this repetition is self-referential tightness or merely a running-out of appropriate lyrics, as it is the one track which wanes unlike the others. For all the inviting things about straightforward pop, there is only so far you can take a metaphor about bringing yourself back down to Earth after having your head in the clouds.

More thrilling are the joltier moments on ‘Baboo’, or the heartfelt “I wish that I could dance like the rest of the girls” on penultimate track ‘The Girls’. A gentle, perfectly swaying motif warps into something a little more frenzied as it is moves into a hypnotic drive. Dancing won’t cure anxiety, and nor should it, but dancing to an artist as clued-up on lucid dreaming and the unconscious self might be a helpful enough place to start. I hope Pixx learns to join me.