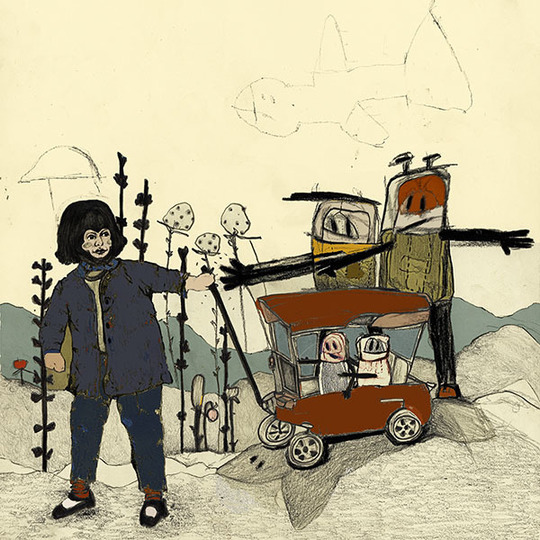 Naked. That word perfectly sums up the essence of Before the World Was Big, the debut album of the duo Girlpool, a couple of singer/songwriters out of Los Angeles who managed to capture the imaginations of anyone paying attention in a shockingly short amount of time. Cleo Tucker and Harmony Tividad made an album recalling the same adult angst and overall sense of wonder the likes of The Moldy Peaches managed to capture so deftly, and went on to become indie wunderkinds in the eyes of many. Second set Powerplant is a natural extension of the anxious feelings the band touched on in Before the World Was Big, but manages to augment those sounds and emotions with a crisp clarity indicative of maturing musicians taking their cue from a variety of influences.

While there is a palpable spontaneity about Girlpool’s lyrics, they also exhibit a meticulous nature, as if in their candid descriptions they manage to touch on a wide range of emotions in poetic harmony. Accompanied by just a guitar and bass, they exhume a robust energy, laying scratchy yet melodic vocals in a wall of noise. It functions as an immense yet sparse sound, as showcased by 'Sleepless', where Tucker and Tividad create a sense of drowsy instrumental splashes in just the right areas, heightened by their whisper-like crooning. 'Corner Store' is a skilful blend of big sounds performed with tightened restraint and lyrics that invoke an irreverence encapsulating the millennial age. A corner store transforms into a museum, where every object observed is rife with nostalgic underpinnings.

The real crux and beauty of Girlpool’s sound is in the free-associating, Dylanesque fashion that they manufacture complex songs that come across the ear like simple vignettes. 'Fast Dust' is a crowning melting pot of warbly Sonic Youth-like chords and soft-spoken refrains that invoke a tempered atmosphere of marvel. Tucker and Tividad don’t feel the need to fill in all the blank spaces by blatantly stating the theme of their tunes, and thus their music retains a sense of mystery that is infectious. Metaphors and visionary illusions abound, and the listener is free to complete the puzzle with their own projections. 'Powerplant' is a breezy gallop, full of distinct musings of corporate working life. Once again, the message is direct yet open to interpretation.

The fact that the lyrics are so cryptic seems like a direct response to the legion of people of who felt that Before the World Was Big was some thematic treatise on growing up in the millennial age. We still get vulnerability, stories, and observations, but they are cloaked in much less analytical detail. Tucker and Tividad want the listener to ascribe their own feelings and reflections on the music rather than vice versa. 'High Rise' barely registers over one minute, with the band singing “Someone to fill a paragraph/ Revising stories dreamt in half” over hushed guitars. The duo seem entirely content to supply just enough to spark the imagination, but not to overburden with thorough, microscopic narratives that spoil the guessing game.

Tucker and Tividad not only show off their unparalleled chemistry throughout Powerplant, but their evolution as musicians as well. 'She Goes By' is a consummate example of the band utilising a sensation of judicious guitar work to augment their vocals. It’s a burst of unfettered energy as the duo implement a cavalcade of dissonant harmonies, reminiscent of the roving sounds of The Cranberries. 'It Gets More Blue', quite possibly the best song on the album, is led more by the concurrent voices of Tucker and Tividad, wafting in a synergy that propels them right along the mousy beat. The duo feed off each other in a symbiotic manner, pushing each other to synchronous heights that are hard to come by.

Music is cathartic for Girlpool, allowing them to share their honest expressions while simultaneously allowing the listener to impose their own perceptions. This is a delicate balancing act that takes most artists years to master, but Tucker and Tividad provide enough give and take to make the overall experience one of constant intrigue.