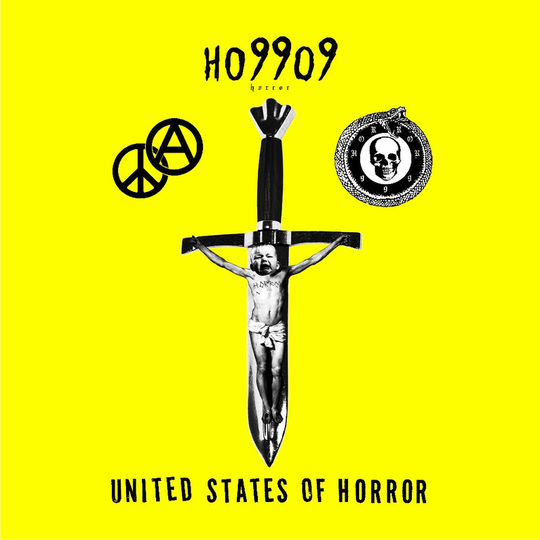 Do you believe in angels, demons, and gods?

That’s just one of many pointed questions posed, with gleaming grin, by a pair of self-styled ‘mutants’ with a fixation on death and decay. Fronted by Los Angeles/New Jersey hybrid theOGM and Yeti Bones, Ho99o9 - pronounced ‘horror’, natch – trade on a maelstrom of punk, hip hop, hardcore, industrial and the odd dash of metal for good measure. And what a compelling wreck it is, too.

Rare the debut that takes so much on and retains a keen focus from start to finish, yet as narrative, tempo and genres shift about while playing off one another, United States of Horror coalesces into one heroic, furious and timely detonation. This is a record more concerned with jolting the listener into a determined course of action rather than merely unsettling – though it is capable of that when the mood strikes.

The initial 18-second discourse comes in the form of a distorted, child-assisted pledge of allegiance to an increasingly fractured, possibly lost state of play. ‘War is Hell’ and ‘Street Power’ quickly seize on a sense of unease, alternating between methodical, pulse-lined preaching and calculated shifts in speed and tension. Rather than push away, the pair draw you all the way in, most notably when the latter effort concludes inside a moving car as an orator lays out his philosophy in sobering fashion.

There’s a feverish raw power in asides such as the above and on the interludes that occasionally arrive to add anxiety rather than alleviate - ‘When Death Calls’ is particularly unnerving in this regard. Living up to its title, United States of Horror is superb at world building, every piece connecting no matter how spiked the shards. The more you tune into that existential car ride, the more you feel like you’re in the back seat, either clawing for the door handle or fervently nodding in agreement.

Comparisons to Death Grips make a certain sort of kinetic sense – ‘Bleed War’, ‘Knuckle Up’ and the hellacious rhythm served up as a flourish on ‘New Jersey Devil’ certainly make the case – but there’s a singular sense of ownership here, an unyielding conviction that haunts the brain long after you’ve doubled back to a tried-and-tested playlist. It’s a welcome reminder of the strength of a contained narrative, fast becoming something of a lost art. Sure, United States of Horror is blessed with belters that can be easily consumed as bite-sized tasters, and the genre-hopping is sensational when it clicks – ‘City Rejects’, ‘Hydrolics’ and ‘United States of Horror’ stack up against any punk, hip hop and pop efforts from this year so far - but focused commitment is demanded and duly rewarded.

You’ll need a breather or two, for sure, but that’s the nature of great horror, regardless of what supernatural forces you choose to worship.