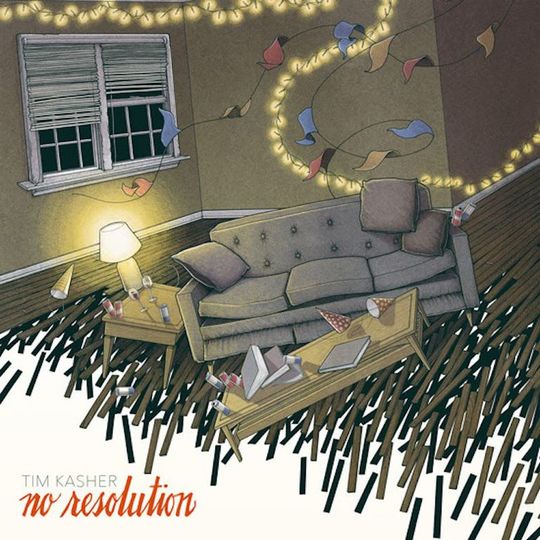 Over a career that spans 20 years fronting Cursive and The Good Life, as well as releasing a clutch of albums released under his own name, Tim Kasher has explored the fractured human psyche in a body of work that ranges from the merely great to the truly exceptional. His last, 2015’s Everybody’s Coming Down didn’t stray much from Kasher’s well-worn themes, mind, and perhaps suffered for it. Nor does No Resolution: in its cynical dissection of human relationships the singer returns to the same territory he mined to such exhilarating effect way back when with Cursive’s Domestica and on solo release The Game of Monogamy.

The difference is that while that latest Good Life LP occasionally sounded as worn out and defeated as its central conceit, Kasher is on sparkling form here. That energy and sense of rejuvenation stems in part from the fact that he and his Cursive bandmates are releasing the album on their new label, and also because the record coincides with his long-standing ambition to script and direct a feature film. No Resolution is the title of said film, and this record both complements the work and acts as its soundtrack. Nine songs amid a sprinkling of interludes and segues that read like stage directions, it makes for a discomfiting yet richly compelling listen, at its best when its tight, snappy arrangements lurch towards the volatile, reflecting the state of mind of the soon-to-be-married couple at its centre.

So, while ‘Runts’ is a punchy, regret-laced number that deftly establishes the stakes - namely the enormous pressure that couples of a certain disposition are prone to placing themselves under - and the moving, string-laden ‘Break Me Open’ takes these themes and runs with them, the album doesn’t really ignite until fourth track ‘No Secret’, wherein the smouldering resentment of its protagonists erupts in squalls of strings and electric guitar. The effect brings to mind 2003’s The Ugly Organ in all the best ways, Kasher’s voice teetering on the brink of the full-throated scream that defined much of Cursive’s early work. “I can’t remember my childhood,” he laments, before offering an admission that accounts for at least some of the strain felt here: “All I recall is a flickering screen / My life is likely a forgery / Cobbled together by books and TV.”

Likewise, ‘Hollow’ is a standout, a battering ram of noisy strings and brass atop which Kasher struggles to find meaning in, well… anything. ‘Messes’ contemplates co-dependency in one almighty sigh of resignation, replete with lines like “Sometimes the world feels like a fist / I’m all choked up in its grip” and “All of our friends are having kids / A new generation of little shits / It’s all a bit suspect / Yet hard to resist.” Set against such despondence, a song like ‘An Answer for Everything’ and its hazy recollections of optimism and tenderness becomes especially moving; also featuring a potential callback to The Good Life’s ten-minute opus ‘Inmates’ that will serve to please any long-term fans, Kasher is as rueful and battle-scarred as ever as the record eases into a more ruminative back-end (albeit one that features at least one more cathartic blow-out).

No Resolution is, as its title suggests, a knotty, messy work: a series of interior monologues depicting some unsavoury but very human sentiments; a sprawl of devastating emotion wrought with a keen yet weary eye. But it’s undoubtedly a triumph - Kasher hasn’t sounded quite this sharp in years, and it will be fascinating to see how his jaded romanticism translates to the big screen.