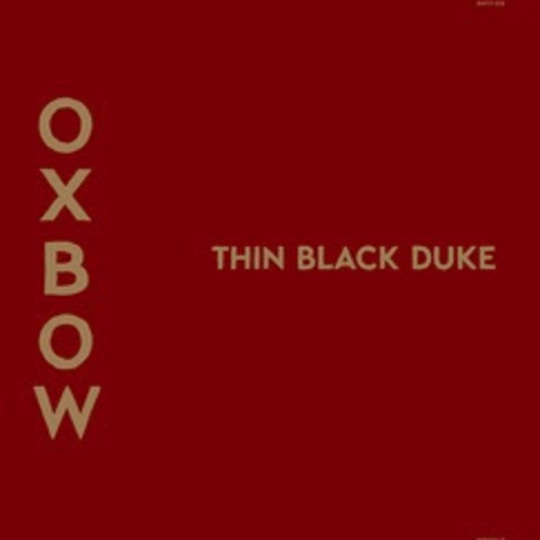 Approaching 30 years of existence, San Francisco's Oxbow have never exactly been conventional. While there is a definable vein of familiarity running through the jugular of their music, the many vessels and channels they traverse over the courses of their albums can make it extremely difficult to keep up. Generally, it's best just to let them take you for the ride.

Oxbow's latest, Think Black Duke somehow comes a whole decade after their last release The Narcotic Story, which was also released on Aaron Turner's Hydra Head Records. In that time, their contemporaries Swans, Enablers and Harvey Milk have all come along and disappeared again, each prophesying their apocalyptic nightmares to relative (commercial) success. So to that end, it makes sense for Oxbow to re-emerge now to re-stake their claim as the world's true doom-sayers; not that it's a competition.

What is initially most evident in modern-day Oxbow is age. The band are now well into their collective middle years now, and there is a weariness and experience that this brings which the band successfully utilise into their uncompromising sound. It is perhaps because the band give themselves lengthy amounts of time to produce their at times nightmarish material, but there is a real swagger about Thin Black Duke that isn't merely an ode to the recently deceased Thin White Duke (though it doesn't hurt).

Ironically, this may well be Oxbow's most accessible album yet. While their music still traverses maddeningly Byron-esque landscapes (and still has a healthy dose of raging distortion ringing through out) it isn't anywhere near as punishing as their younger selves were. That said, Thin Black Duke replaces aggressive 'noise' with a real swagger and confidence that comes with an act who have been playing together for nearly 30 years, but remain willing to push themselves creatively.

Opener 'Cold & Well Lit Place' starts auspiciously, with a whistle, but soon throws the listener into the hellish pit the band have created. Full of twists and turns, the band navigate through various misleading passages, all the while maintaining the one signature riff which the song is built upon. Meanwhile, the tenacious and imposing presence of vocalist Eugene Robinson provides a mouth-piece for the character of The Thin Black Duke, whose deviousness represents the seven deadly sins while also taking a shot at the religious doctrine that concept is borne from.

In interviews, guitarist Niko Wenner has spoken about being influenced by classical and jazz music while writing this mostly rock and blues referencing piece. And it's not difficult to see where he is coming from; strings and brass sections flourish and pepper between the band's basic '4-piece blues/rock set-up' in songs such as 'Ecce Homo'. But soaring atop of all that is Robinson's incredible vocal performance. His instantly recognisable tones and range sounds relentlessly pained at this terrifying universe the band are reflecting upon, with just the right amount of sinister turns to keep his character both sympathetic and alluring.

Lyrically, Thin Black Duke is a masterpiece. Robinson's words spin out a narrative yarn that keeps the album a fascinating listen which rewards repeat turns has one grows more accustomed to his voice and character, digging deeper into the album's dark heart. Even his initial crazed, in-tongues, rambling of 'A Gentleman's Gentleman' is staggering, making the moment his normal voice returns to describe "the duke" even more impacting:

"You see, the Duke's mustache is like cordite
And his head is clean-shaven and his neck is bull-like
And his fingers muscled and tight
The Duke is deluxe and delightful
And the lovers of him all say so
Before they leave and after they go
And at the Duke's, eyes smile all the time
And the water and the wine flow all the time
And when the Duke talks he sounds like a mime
With his hands doing ALL the talking"

Ultimately, Oxbow's seventh full-length is an incredible, cinematic experience which is at once rewarding and terrifying. They have always been a consistent unit, but they feel like a band you don't realise you miss until they've not been around for a while. Thankfully, they have returned with a raging bull of an album which is exactly the kick up the behind 2017 needed, given there is a lot to be angry about. In an age where more and more bands seem reluctant to push themselves beyond simple genre-based limitations, it is pleasing to still have acts like Oxbow around to show the current generation how it is done.