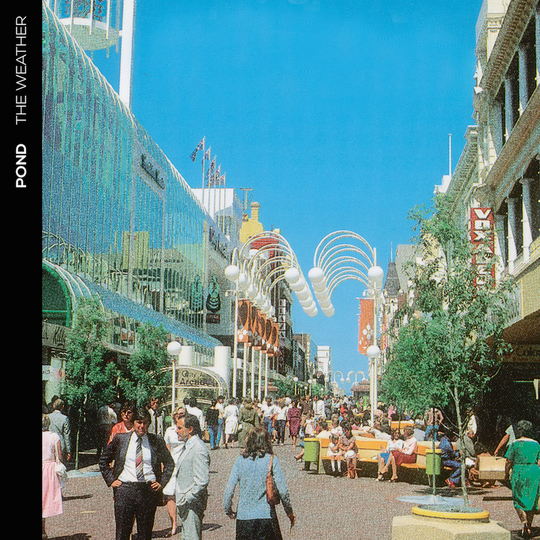 The seventh (yes, really) album from Pond, entitled The Weather is certainly atmospheric in its nature, but is balance with a meteorological sense of the topical.

Lyrically, it's a broad, emotionally-led investigation into 'the state of things'. By no means, however, is it bogged down by the precise or the singular or the definitive. Within its lyrical muddlings, we might be able to tease of a forecast of things to come, or it might just be fooling us with a potent swirling of punchy psychedelic rock.

That's not to say that it stands completely distinct from the big, contorted, psych pop wagons that comprise the back-catalogue of the band from Perth. However, their full-bleed sound has been dialled down in favour of slinky production and distant - but crisper - vocals that sound more cool dive bar than surf spot. Nick Allbrook and his band (this one, not his other one, Tame Impala) take on a measured, if not slightly surrealist look the world through the microcosm of sunny Perth and is darker currents within it.

Allbrook has spoken in interviews about the subtext of the album. How it explores the not-one-thing-nor-the-other nature of Perth. It's not the most obvious concept that leaps out at you from this theatrical, textured album, but it's a compelling filter through which to listen to their fatalistic approach.

Their doom-forecasting is most overtly manifested in '300000 Megatons'. The political reverberations of the song signposted by its early release on the day America elected a President with an all-too-hawkish approach to nuclear weapons. As with much of The Weather, the track feels like a spiky, theatrical rendering of disaster, as opposed to a truly bleak one. It's very Douglas Adams its sound - bombastic, cathartic, tongue-in-cheek. It's the apocalypse you want to listen to.

This was followed by the less politically overt but just as compelling single 'Sweep Me Off My Feet', the video of which takes on all sorts of disparate images of cultural signifiers and heightened emotion, augmented and spliced together. The dreamy-weird synth pop track speaks sardonically about disappointment, and a strange whirling optimism. "I'm lonely but I'm here." It could be read as political or personal.

In 'Edge of the World pt. 1', a melodramatic organ-led opening that sounds just like impending doom gives way to a bristly, chewy core that uses the grandiose sounds of early science fiction. It's vaguely daft but never becomes laughable. If the album is a musing on location, they've clearly allowed for some off-planet stretch.

'Paint Me Silver' mixes the personal and the political again, oscillating between seemingly straightforward romantic yearning, and a plaintive description of "soldiers and the children still shivering in the jungle". The relationship between the two themes is ambiguous - something which underpins much of the album and might, essentially, be the point.

The video they released for this track thickens the plot further. The band are rendered as liquid mercury humanoids, as they shift their way from domestic living room to space ship settings. They are joined by a troupe of smaller lava-esque humanoid backing dancers. It's tempting to read in to this, but perhaps the most convincing reading is that it's just a daft illustration of an equally daft, but tantalisingly complex song within an album that pairs satire with sci-fi and apocalypse with lust.

'Zen Automaton' is where the collage of contradictions is most concentrated. Jazz samples and modern beats converge, with Allbrook's high-pitched, alien vocals becoming ever more taut and tense.

It's easy to try to read a lot into The Weather, especially given the band's overt actions to align it with various political sentiments. To interpret it as straight critique would be to do an injustice to the rich and - at times - playful nature of the music. The retro-futuristic sound that coats every song looks backward to the imagined sounds and textures of the future, and riffs on popular culture and captured news bites.

The Weather sits somewhere else then, an album inspired by dissatisfaction, full of truly curated songs that aren't all that serious about the scary stuff. So, both of our time, and out of it.