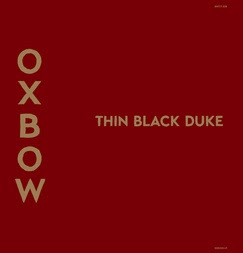 This may well be Oxbow's most accessible album yet»

Over the 30 years of Oxbow’s operations, no one has come comfortably close to classifying the Bay Area group. This could arguably be the result of Oxbow’s ongoing evolution, but accurately describing any particular phase of the groups’ seven-album career is no easier than describing the broader metamorphic arc of their creative path. This is especially true with their seventh album Thin Black Duke, where Oxbow’s elusive brand of harmonic unrest has absorbed the ornate and ostentatious palate of baroque pop into their sound, pushing their polarized dynamics into a scope that spans between sublime and completely unnerving. This is new musical territory for all parties involved. As throughout their history, Oxbow grapples with channeling man’s most primal urges through a framework of meticulous, cultured, and cerebral instrumentation. But the unadulterated electric roar and percussive barbarism of their past work wasn’t as wholly satisfactory as it had been in the past. Other flavors were deemed necessary and called into play, both to slake unnamed thirsts and to suitably fit the Thin Black Duke’s lyrical themes, but also to explore the further reaches of Oxbow’s studied approach to tension and release, structure and dissonance, and melody and abstraction. Consequently, the attentive ear will notice recurring musical phrases and motifs throughout Thin Black Duke. Noticing such details isn’t necessary to absorb and appreciate the album, but as Wenner suggests, “I think I'm not the only one that finds a visceral satisfaction when you can look into something you like deeper, and deeper, and find more and more there.”
description from www.roughtrade.com