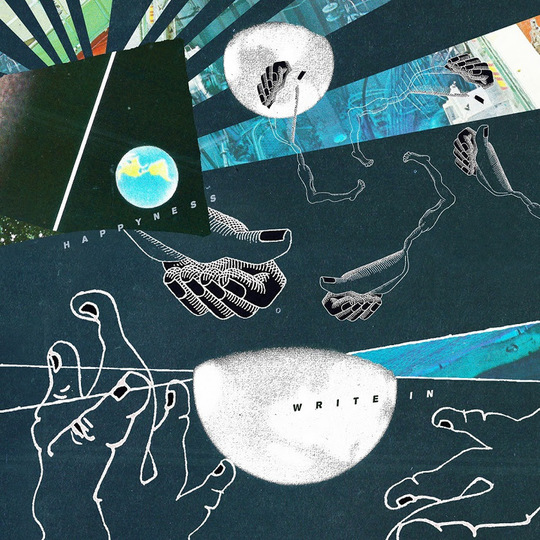 Initially, the most striking difference between Write In and its 2014 predecessor Weird Little Birthday is length. At just ten tracks it’s almost half the length of their debut. Another distinction between the releases is that whereas Weird Little Birthday was a DIY self-released effort, Write In is being put out by Moshi Moshi. However, despite being signed to a label, Happyness have stuck with their lo-fi approach recording it in their own makeshift studio for the princely sum of £500.

In defiance of their tiny budget, Happyness have created an audaciously rich-sounding record. And with half the length they have discovered double the focus. This new laconic approach means the wistful instrumental noodling, that aligned them with the psychedelic improv of Do Make Say Think as much as it did with college rock, has been forfeited, but what has been gained is an emphasis on an uninhibited bid for pop perfection.

And within that endeavour they have maintained an expansive breadth with many of the tracks. 'Falling Down' opens with a shimmering, yet understated beginning, but it’s a ruse for what turns out to be one of their most enchantingly sweeping songs. It sparkles with gentle guitar licks, delicately wrought vocals and a build that soars gloriously. They may not be progressives, but they have a canny knack of drawing you into their wonderfully fuzzy world that’s hard to resist.

Two tracks from last year’s excellent Tunnel Vision On Your Part EP make a reappearance on the album. The hopelessly romantic title track of the EP features a lovely vocal that recalls Elliott Smith in more ways than one, and the breathy harmonies of 'Anna Lisa Calls' dish out a hook filled swayingly summery delight. It’s testament to how many great tunes Happyness have at their disposal that they declined to include their superb homage to Samuel Beckett, 'SB’s Truck.'

Elsewhere, 'The C is A BAG' has a woozy and slightly surreal magnetism; 'Unpretend Style Raids' includes a rising and falling guitar line and bleary vocal that emulates some of the more ponderous moments of their debut; the noisiest track on the record, 'Bigger Glass Less Full,' also features their most Beach Boys-esque melody - disguised as it may by a vocal that sounds like it’s being sung from under a blanket. Time and time again the highly crafted songwriting belies the homespun production. In turn that production adds a real charm to their recordings, and is a refreshing relief from the plethora of overly polished music. And whilst they have a very clear dedication to their influences, they avoid associated pitfalls in that they simply do it so well and with real heart.

Those not already fans of this particular variety of music aren’t likely to be swayed, but those who are will no doubt be captivated. Happyness makes you remember why you liked college/alt rock in the first place. And why you can again. True to their name (aside form it being an auto correct nightmare) they put a smile on your face, the kind you get when you feel pleasantly tipsy. Many bands have attempted to capture the appeal of college rock at its hight, but Happyness are perhaps the first that don’t leave you merely wanting to dust off your old Pavement records. Write In will do nicely.