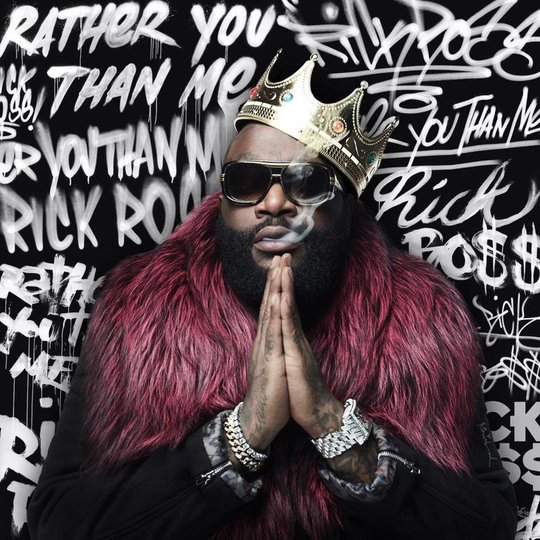 For whatever reason, Rick Ross’s guest features on top 40 radio jams are far from perfect, with Ross often using a canned sort of repertoire to brag about his wealth and women. But when it comes down to it, Ross has made some excellent full-length albums, like Port of Miami and Teflon Don. The puzzling thing is that Ross’s subject matter hardly deviates here, but in the album format he just seems to know exactly what it takes to put a cohesive record together. Even as gangster rap dies a slow, painful death, Ross remains indifferent, cranking out captivating albums at a ferocious pace. Rather You Than Me is another shiny addition to his catalogue, with Ross fusing his tough talk and knack for beat selection into a must-have for fans.

Ross starts off things with a bang, aided by the soulful touch of Raphael Saadiq on 'Apple of My Eye'. Usually Ross intros are reserved for him talking about his luxurious life and high-profile status, but 'Apple of My Eye' is much more introspective, with Ross rapping about a range of issues close to his breast. It’s a wonder why Ross saves his best rhymes for his albums, but it’s utterly gratifying to witness him flexing the arsenal of his powers on Rather You Than Me. He gets energetic when speaking about one of his favourite subjects on 'Trap Trap Trap'. Ross’s alternating vocal pitches make his animated performance all the more worthwhile. Wale and Young Thug prove a welcome addition, infusing the track with their kinetic bars and well-timed boasts.

Ross gets downright personal with 'Idols Become Rivals', throwing a slew of insults at the ubiquitous rapper/mogul Birdman. Considering Birdman’s clout in the industry, it’s a ballsy move from Ross. He touches on a range of of issues revolving around the leader of Cash Money Records, from ongoing conflicts like Lil Wayne getting his widely anticipated Tha Carter 5 shelved and DJ Khaled not getting fairly compensated for his work with the label. Not only is the feud sensational, but it represents Ross’ growing confidence in his stature as one of Hip Hop’s anointed few. Ross holds nothing back in his tirade against Birdman, but intersperses his critiques with admonitions of respect nonetheless.

Gucci Mane and Ross make an impressive partnership most times, dating back to one of Teflon Don’s greatest moments, 'MC Hammer'. But 'She On My Dick' is a let down, featuring a series of inspired raps but a insufferably repetitive chorus. The song represents a rare departure from the rest of the content on the album, which is engrossing for the most part. The follow-up, 'I Think She Like Me' fares much better, with Ross providing a thrilling rhyme scheme, bouncing from bewitching metaphors and notable one-liners. But one of the highlights on the album is when Nas appears on 'Powers That Be'. Ross and Nas are an unnatural fit, but they definitely spark chemistry when collaborating, such as 'This Thing Is Ours' from the MMG posse album Self Made 2. Ross puts up a noble effort, but Nas outshines him in the contest of bars, making for a sensational record that grows with each listen.

There are a lot of guest spots on the album, and in most cases this causes problems for rappers
especially. But not in this case; the features are well-picked and only add to the overall lustre of the album. Longtime collaborator and label protege Meek Millz joins Ross on 'Lamborghini Doors', and like any track Millz is apart of, the song is distinguished is by a palpable energy. Scrilla is a much less starry name than Millz, but 'Triple Platinum' doesn’t suffer a bit. Ross is vitalised in his performance, and Scrilla, taking advantage of the opportunity gives a memorable performance. Ross touches on his favourite subject matter - women, wealth, drugs, and cars - but his lyrics are above par, rapping with fervour.

One of the best moments on the album is 'Maybach Music V', the fifth iteration of something Ross started since his second album Trilla. Dej Loaf’s silky rhymes are a perfect match for the Buda & Grandz beat. Ross tempers his money talk to rap glowingly about a love interest. The finale of the album, 'Summer Seventeen', is disappointing in that both Rick Ross and Yo Gotti seem to phone in their performances. But overall, Rather You Than Me is another example of Ross’ gift at making albums, even though he litters the radio with corny one liners.