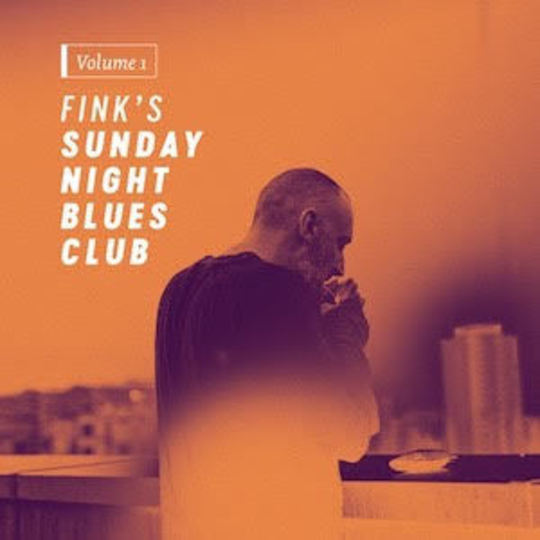 I have to be honest. It's hard to be objective when it comes to writing a review of Fink's Sunday Night Blues Club (and don't forget the) Vol. 1. I love Fink. I love every Fink album. Even the relative mishap that was Horizontalisms grew on me eventually. Fin Greenall has one of those voices that simply works. His way of crafting a vibe, distilling a melody, building an atmosphere with a musical soundscape, is virtually unparalleled in my view. So it is with high expectations and not a little questioning trepidation that I approach this, his 'first purely blues musical output'. A side-project stop-gap on the way to the next Fink album this might be, but Greenall is taking it seriously enough to enlist Flood on co-production duties. So the feeling persists that this falls somewhere between a good idea that became a reality and a proper Fink album.

And this is somewhat how it turns out. Each of the eight songs here are unmistakably Fink. How could they not be? But they suffer simply because they inescapably come across as tracks that could and perhaps should be on a 'proper' album. In fact, the over-riding feeling after several listens is that this should have formed the basis for the next Fink record, rather than coming across as something of a diversion.

But there are great moments here, and each song is crammed full of the potency that makes Greenall's output so vital.'Cold Feet' kicks things off, with a trademark Fink guitar figure processed through some tasty effects, before he intones “Cold feet, always walking a vicious circle”. We're in quintessential Fink territory here. Glorious vocal harmonies abound, the layers of voices rendering other instrumentation totally unnecessary. Before long a swampy fog has descended. For five sumptuous minutes we're carried along. The sparsity of accompaniment really allows the mix to shine. You will, I promise, be joining in the refrain by the conclusion.

“She left me, yes she did and she was right, she was right, she was right to do it and she did” begins the mournful 'She Was Right' as Fink chronicles a love finally lost, realising the part he played in its downfall. This, truly, is the blues, The track becomes something akin to a Max Richter orchestral exploration of the darkness of loss, augmented with distant caterwauling brass. A touching moment.

'Little Bump' and 'Boneyard', in spite of making a play at being trad blues, cannot escape the sense that they would have fitted well on Perfect Darkness or Hard Believer. Is this a bad thing? Perhaps not, but it makes it hard for them to stand out here.

Throughout, there's a pleasingly live feel. Room noises, echoes and just the right amount of crackle and hiss in vocal distortion pervade 'Hard To See You Happy' and the gospel-tinged 'Keep Myself Alone Now'. The bass on the latter is a real driving force, pushing itself out of the speakers towards you as Fink is propelled on. 'Hour Golden' is a real blues stomper, replete with harmonica the rolling rhythmic gait of the best electric blues. It's the best thing on the record and a real departure in Fink's canon, something truly special.

The record closes with 'Black Curls' which feels like the loosest, most jam-like song on the album, and is all the better for it, as Rhodes and a persistent drum tempo are its prime features. Again, the spacious mix really allows each element in the song to shine.

This is an enjoyable record, but not a great one. It whets the appetite for what is to come next from Fink, but will stand comfortably alone as a strong addition to his burgeoning discography. If this is your introduction to Fink, I'd recommend digging deep into the treasure trove that is his recorded history, but at the same time, take this album for what it is, a pleasant addition to it rather than a crowning moment.