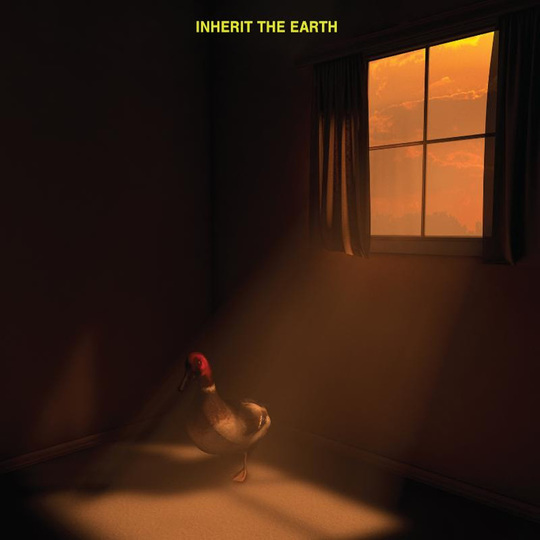 'Where have you been mate?' was my first thought as I listen to ‘Inherit The Earth’ by Gregory Feldwick, aka Slugabed. This is an apt question as it’s been five years since Feldwick released his debut album, the criminally overlooked, ‘Time Team’. This was an album that went against the grain of a dominant sound in electronic music at the time, namely Dubstep. On Time Team Feldwick created the flipside to Dubstep’s noisy, bass heavy sonic assault. Its 12 tracks were wonky, introverted and a well needed reprieve to the genres relentless bombardment. Time Team slightly skewed and distorted the genre, in the same way that carnival mirrors warp our appearances, and offered a slightly off-kilter version of the genre. Then Feldwick vanished (bar a few of singles and tracks on his Activia Benz label). But now he has returned with a follow up that is almost worth the wait.

After a brief, if not surreal, intro, ‘Stupid Earth’ welcomes us to the album. It spreads it arms out wide and embraces us with a hug, of warm electronics and mellow saxophones, like an old friend. An eccentric loop appears, which sounds like Feldwick made it by banging some pipes and pots then sampling the hell out of it. It’s this element of playfulness that separates Feldwick from his peers. Most wouldn’t consider experimenting in this way, but Feldwick does, and makes something memorable and poignant, rather than going for laughs. Woozy synths swim around you and everything has the feel of getting in after a big night out. The room spins, but you know where you are and feel comfortable and content. It tells us that ultimately his sound hasn’t changed, but there will be some subtle, even mature, differences from Time Team.

‘Infinite Wave’ is reminiscent of the Stranger Things theme tune, if it had been recorded by Philip Glass with Iglooghost producing it. The highlight is three quarters of the way through, when a single bassline emerges and the songs motifs swirl about it, like fog on a beach at midnight. And just like the Stranger Things theme it's catchy, but full of brooding suspense. Another stand out track is ‘Gold’. What sets this apart from the rest of the pack is that Feldwick has brought some friends along for the ride, namely Hairy Hands and Peter Lyons. The inclusion of vocals adds another texture to the album and helps to break up the instrumentals. Delicate flutes and manipulated vocals help to defuse an abrasive and challenging backing track, giving ‘Gold’ a pop sheen that not only makes it enjoyable, but sets it apart from the rest of the album.

‘Time 2 Let It Go’ is another high water mark and one of the cleanest and simplest productions on album. Wonky breakbeats, fuzzy cascades of synths and that trademark 16-bit bassline gives the track a wonderfully surreal feeling. It’s like Feldwick has re-scored your favourite Nineties video game. ‘A Thousand Tiny Hands’ and ‘Perfect Earth’ change the direction of the album as contemporary classical motifs run amok. Philip Glass’s influence comes to the fore again, with subtle piano flourishes, and soaring orchestration. However it’s not a straight emulation, as studio glitching, chopped up choral vocals add Feldwick’s style to the mix. These are key tracks that show the progression, and maturity, since ‘Time Team’. This musical detour is short-lived as ‘Feeding Time’ is back on the wonky electronic trip. Retro synth stabs and playful saxophone samples make this one of the most immediate and satisfying tracks on the album.

Inherit the Earth is an album full of inventive motifs and reflective moments that never lose sight of Feldwick’s wonky electronic world view. There is a maturity that isn’t found very often on electronic albums, but there is also a blissed out euphoria under pinning everything. The delicate orchestration shows that an album doesn’t have to be full of Feldwick’s trademark cascading synths and loping beats for us to enjoy it.

However the album could do with a few more cuts like ‘Mountains Come Out of the Sky’, ‘Sun Too Bright, Turn if Off’ and ‘Sweet Baby Electric Fire’. These tracks mixed a small room mindset with a pop sensibility making them almost impossible to ignore. The album also misses something of the visceral power of ‘MOTHERFUCKEEEEEEEEEEEEEER’ and ‘The System’. These tracks were basically big dumb fun. Yes it’s great that Feldwick is comfortable, and confident, with his arrangements to feel like he doesn’t need to resort to cheap tricks of sweary samples and filty bassline to make us pop, but as he does it so well, it’s a shame not to close the album with one. Overall however Inherit the Earth shows that he has not lost any of his innovative charm or sense of humour that made his debut such an irresistible masterpiece. Let’s just hope Slugabed III isn’t another five years in the making.