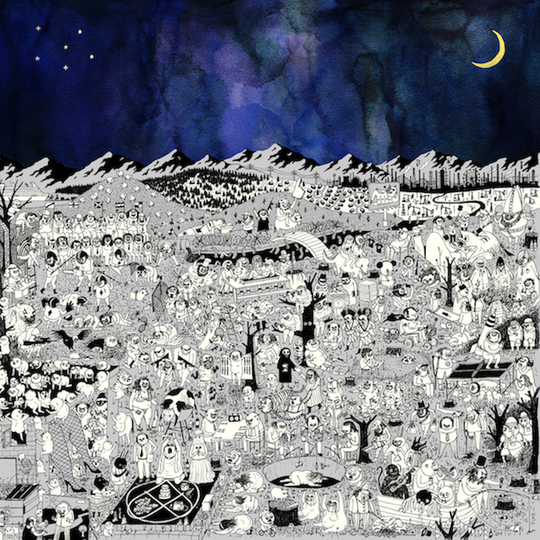 Much of the conversation surrounding Father John Misty revolves around whether or not he is in on the joke, or if there even is a joke to begin with. Take last year’s BBC 6 Music interview where an audibly exhausted Joshua Tillman was said to have ‘lost it’ in the face of top banter merchants Radcliffe and Maconie acting ignorant to the point that they simply weren’t listening to the words posited before them.

Recalling the exchange, Tillman chose to bear the brunt, noting that he was ‘completely fucked up’ on the morning in question. ‘This was Fear and Loathing level,’ he told The Guardian. ‘I’ve got these lizard men with English accents doing this Laurel-and-Hardy act on me and I just couldn’t deal with it. It’s not as if those guys were so horrible. It’s me. It’s my fault.’

Can we take such a naked mea culpa at face value? After all, in the same chat he claims to have never given an honest expression of himself when sat opposite a journalist. Again, it depends on how you interpret the character of Father John Misty. So, who or what is he? For some, he’s a wry, sardonic dude armed with a guitar and existential-tinged social commentary. For others, a modern court jester who points a visage of mournful apathy in the direction of his phone at award shows when his name isn’t called out.

He’s the ‘problematic fave’ for woke souls who want to fuck him but desperately need you to know how conflicted they feel about such desire. His often frivolous social media exploits are deemed worthy of real-time-updated Pitchfork news stories, a distinction usually reserved for Kanye West. Even his press release underscores ‘the infuriating line he seems to occupy between canny and total fraud online and in interviews’.

Perhaps we shouldn’t fixate on it, for to do so runs the risk of diluting the work. Perhaps the jape is on us as we look past the duality of adopting a supposedly quirky persona only to use it as a means of telling difficult truths. Perhaps Father John Misty is simply ”another white guy in 2017 who takes himself so goddamn seriously”, as he muses on ‘Leaving LA’, a 13-minute ramble with no chorus and one deliberately languid speed. Three years in the making, that particular round of self-effacement and personal confession may prove a bridge too far for some, but it is both knowing and rewarding in its demands.

Take the traumatic recollection of a Fleetwood Mac-scored near-death experience when Tillman was just a child, presented here in almost throwaway fashion as it concludes the penultimate verse of a movement that ultimately sidesteps a punchline… or does it? ‘Leaving LA’ is a challenge. Depending on your mood, it might be a chore. Arriving as the centrepiece of what very much registers as a concept album, it makes perfect, bittersweet sense. Pure Comedy is a state of the world address and Tillman is determinedly critical of the “godforsaken rock that refuses to die” and ”bright blue marble orbited by trash” upon which he finds himself pontificating.

His brand of satire – a mixture of acid and silver tongue – is immediately evident as a kick-off title track tunes into a frequency at once theatrical, despairing and sobering. The arrangement – lush and beautiful, a true embarrassment of riches – builds and blooms in distinctly winsome fashion, as if a descendant of Elton John’s titular ‘Rocket Man’ grew up to feel a similar sense of disconnection with humanity, despite being at least physically closer to it than his progenitor.

The argument can and will be made that Pure Comedy is both highly self-indulgent and one-dimensional. Such a stance has merit – it’s kind of the point, really – but does a disservice to tracks like ‘Total Entertainment Forever’ and ‘Things It Would Be Helpful to Know Before the Revolution’, two instances of layered, direct storytelling. The former has already grabbed headlines for its pornographic Taylor Swift-based opening salvo, but Tillman is unapologetic about following in the Yeezy Boosts of another outspoken orator who invoked the pop queen as an avatar for modern life’s superficial ills. Clunky? A little. Fair? Probably not, but here we are.

Where we are is important to Father John Misty. Over 75 minutes he takes aim at technology, hypocrisy, social media, politics, human nature and the frailties that come along with being so very vulnerable when one strips away all of the distractions and glamour that propel us through our numbered days. Despite the running time, it should be noted that Pure Comedy moves at a clip; only ‘The Memo’ and its cold boardroom-speak textures belabour the narrative a little too much on a record that’s all about stretching out an exact, unwavering thread.

‘So I’m Growing Old On Magic Mountain’ is a career peak, one that recalls the fine work of Vangelis on his Blade Runner score in its second half as Tillman’s insightful, introspective vocals melt away in place of a warm, rather gorgeous synth flourish and a rising tension that manages to soothe as well as shake. He’s realised a sense of acceptance here, and while you won’t necessarily need that sentiment to be reinforced on the closing ‘In Twenty Years or So’, its final bow is a welcome one for those who struggle with feelings of insignificance and a fear of their own mortality.

It’s not that Tillman has all the answers – if anything, he’s keenly aware of his own shortcomings and seems to be up for the fight, for meeting the callous indifference afforded by the cosmic joke that begins at birth. Despite its multitude of sideways glances, Pure Comedy isn’t a contemptuous sneer, rather an attempt to dust oneself off and seek control of a ship that’s destined to sink no matter what. He’s pondered before about not being able to ‘shut the fuck up’ whilst drumming for Fleet Foxes but unfiltered enunciation suits Joshua Tillman or Father John Misty or whatever you want to call him, at least for right now. He remains unknowable, and maybe that’s the sharpest gag of all.