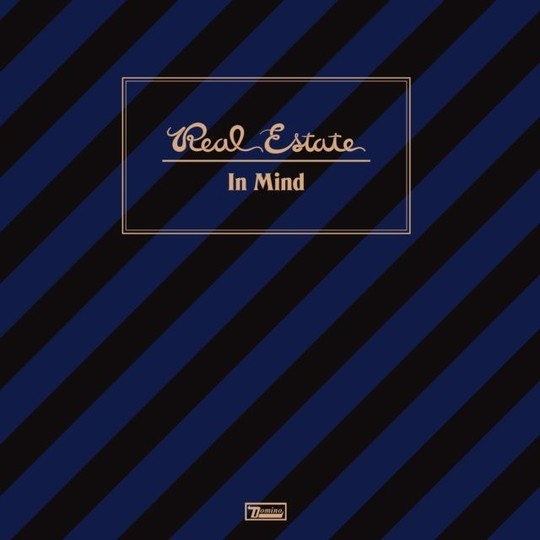 Has there ever been a band more 'well timed' than Real Estate? They emerged at the tail end of the previous decade when indie-rock and all its weird mutations (remember Chillwave?) with a suitably on-trend debut and 'matured' their sound with every release since. If this is a cynical reading of Real Estate's success, let's be clear - the New Jersey five-piece get away with it due to their consistently terrific songwriting ability.

It's been eight years since Real Estate's excellent debut self-titled album, a record in which you could practically hear the Jersey shoreline washing away in the background of their suitably chilled out indie-rock, and it was to little surprise when Domino picked them up from their local friends Woodsist Records shortly after. The two albums since, 2011's Days and 2014's Atlas saw the band retain their initial sound, but utilise the bigger production values now afforded to them and saw their songs subtly grow in maturity and even a certain darkness bubbling over their staple upbeat 'surf rock' sound.

Even if there has been a fairly solid consistency to Real Estate's records – the highly catchy single, the guitar interplay, the surf-rock influenced production – the rest of indie music looks vastly different to when they first started out. Back in 2009, the world was enraptured with Bon Iver, Fleet Foxes and Arcade Fire (to name a few) and it seemed indie-rock music was here to stay. This mood didn't really continue into this current decade, however, as Kanye West, Drake and later Kendrick Lamar all released statement albums during a changing social period where all of Obama's post-election optimism quickly became distilled in a seething paranoia. While this is all pretty heavy going, Real Estate, for all their credit, have remained a consistent beacon in a genre which has become increasingly safe and irrelevant to social tastes and mores.

So how do we find Real Estate in 2017? They have resisted the charms that those original peers often have in moving towards a more electronic or R'n'B influenced sound and, on the face of it, released yet another solid Real Estate album, In Mind. While most bands and audiences would have grown weary about this by now, Real Estate's ability as songwriters have allowed them to only need to make small changes to their overall sound but still remain an endlessly pleasant and subtly intriguing act even on their third major label 'Real Estate' record. There were even some doubts as to whether this would be the case: one of the band's key writers and guitarists, Matt Mondanile, left to concentrate on his solo project Ducktails, meanwhile primary singer/songwriter Martin Courtney became a father, and bassist Alex Bleeker relocated to California in the interim.

Listening to In Mind initially, one wouldn't really understand what the fuss about Mondanile's departure was really about. Now replaced by notable local solo musician Julian Lynch, this still feels very much like a Real Estate album in the same vein and trajectory as all their previous records. There is the classic catchy first single (in this case, album opener 'Darling'), general goodwill vibes, and the same guitar interplay and production that makes Real Estate the esteemed band they are today.

However, as with any Real Estate record, one is asked to look beyond their initial sheen, to discover an incredibly accomplished and subtly progressive sound with repeat listens - an ability which keeps Real Estate the excellent studio band they really always have been. Even 'Darling' is fairly deceptive. It's big hook isn't quite as obvious as Days's 'It's Real' or Atlas's 'Talking Backwards' but it is there, burrowing its way into your subconscious with every listen, allowing it to join those songs company as another one of Real Estate's great lead singles. But even beyond that, there is beautiful 'White Light' which anchors the album, coming immediately after the psychedelic jam of 'Two Arrows' a song which starts as a cautious affair but sneaks in a threatening guitar line half way through before growing into one of the band's most explosive moments to date.

So like all of Real Estate's records to date, In Mind reveals more and more of itself with each listen. It has always been easy to dismiss Real Estate as a bit wishy-washy - that is a fair descriptor of their overall sound to a casual listener after all - and their live shows as they've played increasingly bigger stages certainly doesn't detract from that argument. However, the pleasant vibes on the surface of the New Jersey band's sound is what initially hooks you into coming back and listening to a bit deeper. They've played this trick before. Deep Days cut 'Municipality' sneaked in one of the band's darkest tracks - all descending minor chords - and they play it again here with the soulful country-inflected track 'Diamond Eyes' (which also serves as a small reprise from Courtney's familiar vocal range).

It is difficult to say what influence Lynch has had here - his guitar playing is fairly consistent with Mondanile's - but Matt Kallman's efforts on the keyboards are, while often buried in the mix, provide a grounding to the record throughout especially on tracks like 'Holding Pattern' or closer 'Saturday''s "ballad fake-out", and add up to another subtle trick which the band are so good at. Ultimately, there is a familiarity to In Mind which for some may seem a little too much of the same from this now 'veteran' band, but as with every Real Estate record, their collective ears for little surprising turns and touches in amongst their overall pleasing sound, is still impressive, eight years on.