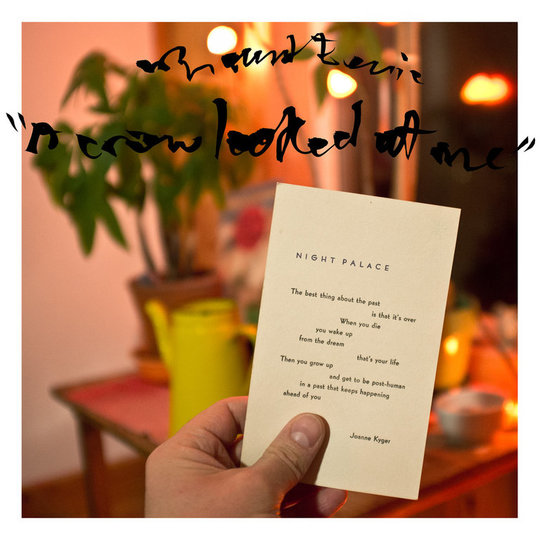 There is nothing this review can add to the experience of listening to A Crow Looked At Me. Sure, there’ll be an incongruous Lou Bega reference at around the 600-word mark for some light relief (it doesn’t really work) and a Nabokov quote in the penultimate paragraph to pretend I’m well-read (I’m not) but they’re hardly worth sticking around for. Scroll down to the bottom of the page and you won’t find any score attached. Even awarding this work the full ten-out-of-ten would feel too callous given the tragic circumstances of the record’s gestation and its heartbreaking subject matter.

Instead, you’d be strongly advised to stop reading this right now. Please, all I ask is that you just go away, sit down and listen to the music and the words contained on this LP with your complete and undivided attention.

On it, Phil Elverum (aka Mount Eerie) will reject the notion that art, music or poetry can possibly comment on the cruelty of illness and death in any meaningful or appropriate way. He will document in intimate detail the trauma of losing a loved one. He will narrate exactly what it feels like to be left behind in lonely mourning. He will do all this within the album’s first two-and-a-half-minutes in fact, on the opening track ‘Real Death’. Then he will keep on doing it, relentlessly, unflinchingly and sublimely so, for ten further songs.

Why? On 9 July 2016 Geneviève Castrée Elverum died of pancreatic cancer. She was Phil’s wife, an artist and musician in her own right, and the mother to a daughter who was born just four months before the hideously unfair diagnosis was made. Two months after Geneviève’s passing, Phil began writing and recording these songs in the room where she had died and the result is a sheer howl. A very hushed and very articulate howl, but a howl nonetheless.

Partly influenced by the un-self-censored, stream-of-consciousness styles of Karl Ove Knausgaard and Sun Kil Moon, Elverum sings of hospital and counsellor visits. He describes his partner’s aching body, ravaged by disease and chemotherapy, transformed into something “jaundiced and fucked”. He watches her die. He repeats her last grasping breath in his head. He scatters her ashes – the dust of her bones – in the place where the family had hoped to live. He opens mail addressed to her, including a backpack for their daughter to take to school, ordered by Geneviève in the knowledge that she would not live to see that happy day. He fails to remember if she liked foxgloves. He gazes at photographs on the fridge which are slowly replacing the memory of knowing she was there in the house. He finally gets round to throwing out the upstairs bathroom rubbish which includes her toothbrush and “dried-out bloody end-of-life tissues”. He gives away her clothes. He wonders what kind of world he is handing to his child, “Smouldering and fascist with no mother”.

You might feel guilty listening to sorrow laid bare with such honesty; complicit in some act of morbid voyeurism. In the past, Elverum has been a fairly private person and you wonder whether he may regret revealing so much after he has completed Elisabeth Kübler-Ross’s scientifically unsubstantiated five stages of grief. Does it feel exploitative? Well, Elverum clearly needed to vent this stuff and to share it with the wider world and you’re unlikely to find a more powerfully eulogistic record released this year. Arguably ever.

Its misery and minutiae are all enough to make Eels’ seminal Electro-Shock Blues album look like A Little Bit Of Mambo by Lou Bega. Unlike Mark Oliver Everett’s autobiographical reflections on suicide and cancer however, A Crow Looked At Me blankly refuses anything in the way of cheery, redemptive optimism. “I don’t want to learn anything from this,” Elverum sings, “I love you”.

Still, there are glimmers of light to be found somewhere in all this sadness. Elverum’s gently heroic love for his daughter, and for Geneviève of course, shines through. We learn about the couple’s courtship and their 13 years together. After describing walking hand-in-hand every Monday to the counsellor, slower each week, until they eventually had to drive, Phil tells us that two months after his wife died, the counsellor also died. The information is so grimly coincidental it’s almost amusing. It was as if the counsellor’s “work was done”, notes Phil. One song ends with the line “It does not feel good”, a rather droll understatement given the situation and surrounding context.

Followed by the words “Someone’s there and then they’re not”, the first thing you will hear Elverum sing on this album are “Death is real”. It is a phrase that’s repeated on subsequent tracks. Along with ensuring that Geneviève’s life and death are not forgotten, to desperately try to stop her from fading, that message seems to be the point of the album. That death is real. That we are “always so close to not existing at all”, as Elverum expresses elsewhere. That we should not take our loved ones for granted. That our existence, as Nabokov put it, is but a brief crack of light between two eternities of darkness.

If the lyrics are raw, traumatised and sometimes shocking, A Crow Looked At Me’s music is more emblematic of the numbness that grief can cause. Previous Mount Eerie works have dabbled with black metal, lo-fi krautrock, fuzzy post-rock textures and Auto-Tune experimentation but, aside from a distorted drone on the penultimate number, there is little of that sonic playfulness here. Much of the album was recorded while his daughter was asleep so Elverum uses mostly acoustic guitars and pianos. His softly whispered melodies contain very few fireworks. Elverum has described the results as 'barely music'. After all, as he insists on that first number, death is not for singing about. Death is not for making into art. And it is certainly not for writing album reviews about, incidentally. Death is real. Death is harrowing and it is exhausting. Why are you still here? Please go away and listen to A Crow Looked At Me. It’s the least you can do and I can’t wrap this up in any tidily satisfying or uplifting way either. Sometimes things just end.

(The reviewer has requested that there be no score assigned)