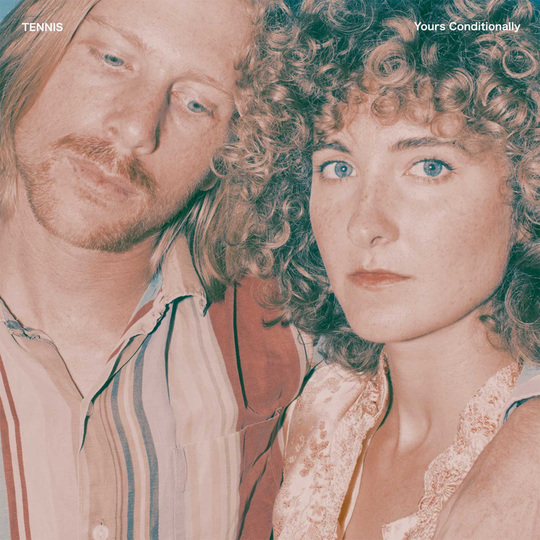 It was bound to happen sooner or later. Just over five years after their debut, Tennis have taken back to the water to create a new album - their fourth, Yours Conditionally. You might remember that back in 2011, their breezy debut Cape Dory sailed across the blogs on a wave of novelty: A husband and wife duo who wrote a bunch of songs on a shared sailing trip together. Who could resist? The promise of nautical puns alone would have been enough for most writers, but the winning lo-fi Sixties pop sealed the deal. In all, the hype was justified.

Nonetheless, Tennis was not a project which you expected to survive more than one album cycle. Catchy as the songs were (and I still frequently revisit that record with pleasure) they were also pretty whimsical, and you suspected they didn’t really have anywhere else to go beyond their cutesy origin story. But now three more albums down the line, they’ve confounded expectations, translating their relationship as husband and wife from press release fodder to a substantive part of their artistry.

As they’ve matured over their albums, gender roles and societal expectations of married life have become a key focus of their work, and never more so than on this album. Even the title itself is a wry dig at the idea of passively relinquishing autonomy to a partner forever, while the songs continue to explore the relationship between the institution of marriage and feminism. Songs like ‘My Emotions Are Blinding’ and ‘Ladies Don’t Play Guitar’ are some of Alaina Moore’s most confident and caustic meditations on gender yet, taking sexist tropes at face value to satirise them.

In wresting their relationship from the fluff of their own write ups, and putting it at the heart of their maturation as a band, Tennis cleverly manage to both honour and subvert their origin story at the same time. And since they are able to pull off that near-impossible balancing act, it doesn't feel hokey that they’ve taken another boat trip for this record either. Not that you can hear it, mind. Gone are the soft calypso and surf-rock influences, along with the diary-entry lyrics about literally being on a boat. Instead, you are able to accept it as the preferred artistic process of a bona fide band, rather than as some sort of gimmicky exercise. This is an admirable feat.

Sadly though, while the artistic vision of Tennis has hit its stride, the music itself is a little adrift on Yours Conditionally. The core of Tennis’ sound hasn’t moved much in four albums - jangly guitars, light keys and rustling drums. Undoubtedly, Moore has massively developed as a vocalist as well as a songwriter. Backing up her own lead vocals with with a choir of soft harmonies; her performance has developed an incredible soulfulness and vulnerability alongside strident confidence, flitting between the two modes with ease. But the simple and skeletal arrangements don’t make natural canvases for the larger ambitions of the songwriting and vocal performances.

This problem seeped in around the time of their last album, following the fine balance of their second record (the criminally underrated Young And Old) but now it takes proper root. Ritual In Repeat had the snap and pop of songs like ‘Callin You’, two parts Madonna to one part Carol King. This was a great sound for Tennis. The closest here is ‘My Emotions Are Blinding’ but it’s something of an outlier. Most of the time, they drift through a mid-tempo lilt; earnest, weepy and sometimes saccharine; walking a fine line between easy listening and background music. When you heard Cape Dory, you probably didn’t expect Tennis to be growing into soulful artistry six years and three albums later, and they deserve an incredible amount of credit for that. But you definitely wouldn’t ever have expected them to sound dreary either, and that’s something of which Tennis are slightly guilty on Yours Conditionally.