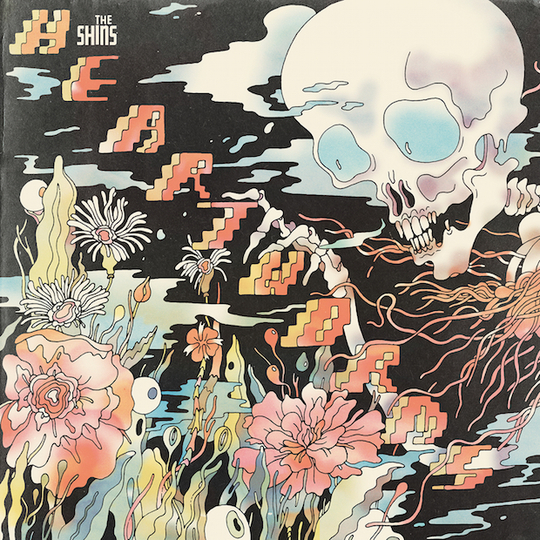 Life can be hard for fans of The Shins. Since the early Aughts, James Mercer and his revolving cast of a band have undoubtedly risen to the top pantheon of the indie ranks, but have taken their precious time about actually putting stuff out. Their recent modus operandi seems to be taking five-year-hiatuses between releases. Back in 2012, the band released the glossy Port of Morrow to much praise, both because it was their first album since 2007’s Wincing the Night Away and of course the end-to-end quality of the writing. No matter how much time passes between The Shins’ projects, Mercer’s songwriting chops remain intact. On Heartworms, the band’s fifth studio album, Mercer has taken over desk duties too, producing all but one song on the album (“So Now What”).

Mercer has long been able to strike that delicate balance between composing complex yet lucid lyrical arrangements to match The Shins’ lush instrumentation, prime examples being his masterstrokes “'Caring Is Creepy' and 'Simple Song'. Heartworms however exhibits a more stripped-down, homespun approach in most areas, allowing Mercer expansive space to really lean into the diverse sounds and let his vocals soar. What results is what fans have come to expect of a Shins’ release - tight, well-layered, and high-calibre indie pop designed to intrigue those very same people waiting patiently between hibernation periods. In short, the time off once again proves useful, with the band issuing one of its strongest releases with Heartworms.

With Mercer handling the production, his vocals seem more attuned to the backdrop instrumentation than ever before. There are few examples better than 'Name For You', which builds on a steady Jon Sortland backbeat that blossoms into a sprawling, harmonious chorus. 'Cherry Hearts' is a lot more stratified, with warbled synths gliding the way for an exhilarating finale. Mercer delivers one of his most animated performances, almost wailing his intent with soaring vocal acrobatics that are his custom. The crawling 'Fantasy Island; is less of an instrumental potpourri but delivers nonetheless. A flurry of synths impregnates the chorus while Mercer furnishes the palate with plush and dreamlike vocals.

As a staple of Mercer’s repertoire, he often goes for experimental undertakings without straying too far from his time-tested formula. The Shins’ sound is one of the most luscious in the indie universe, and Mercer’s sonic tinkering often amounts to substantial transmutations without ever feeling like he's strayed that far from his early Beatles-like rhythms and ambrosial singalong lyrics. He goes for the bare necessities on 'Mildenhall', which sort of sounds like a catchy, slow country-rock tune full of delicate textures as Mercer gives the audience a scope of his teenage years. An absorbing combination up-tempo guitar and keyboardist Richard Swift’s off-the-cuff fingerwork permeate 'Half a Million', where Mercer gradually elevates his pitch to a satisfying howl on one of the definite highlights of the album. A late cloudburst of synths toward the song’s waning moments only augments the appeal.

'Dead Alive', originally released as a single on Halloween, is the most outright example of Mercer’s unorthodox composition style; a man with a ceaseless desire to keep fans on their toes. Yuuki Matthews provides a prominent bassline that sets the ambience of this equal parts funky and eerie-sounding tune. Interspersed between Mercer’s wayfaring vocals are splashes of sound that borders on the supernatural. 'So Now What', produced by Swift, has a rich, sensuous footing, which Mercer croons in an ethereal fashion as he contemplates how to handle a former flame.

Throughout Heartworms, Mercer and company prove that their sparse output is well worth the wait. The totality of the record is enough to engulf listeners in myriad textures accomplished via sound and vision. Mercer is not only a dynamic songwriter but producer as well, constantly exploring new, diverse methods to keep ears glued. His antenna to fan expectations for the familiar as well as the unforeseen is rivalled by a precious few in the indie rock scene. To quote one the band’s staples, “it’s a luscious mix of words and tricks.”