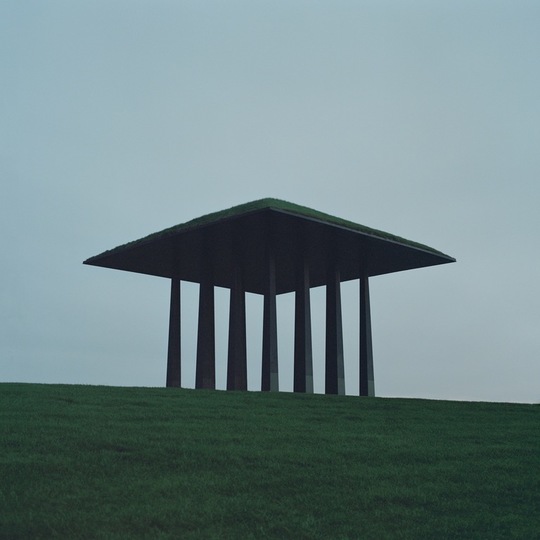 It's easy to romanticise The Homesick as a bunch of provocateurs intent to stir the pot out of sheer boredom. Within the finite confines the Dutch music biz, this prolific trio is considered a bunch of lovable small town hicks making outsider music. Comparable to Swedish rapper Yung Lean and his Sad Boys-movement, Elias Elgersma, Jaap van der Velde and Erik Woudwijk ooze a devil-may-care confidence that's swooned over by Holland's urban Randstad area. However, as the group's ardent creative output develops, their music becomes less and less compatible to their carefree public persona. Whether that's intentional… let's just say The Homesick are perfectly content if that remains a moot point.

Either way, the band's debut LP Youth Huntwidens that gap between projected image and personal intent considerably, especially compared to EP Twst Yr Wrsts. The best example is undoubtedly the album's magnificent centrepiece 'St. Boniface', which chronicles a strange footnote that thoroughly shaped the history of The Homesick's provincial hometown of Dokkum. Saint Boniface was a fifth century clergyman intent on bringing Christianity to the Frisians, whose beliefs where then rooted in Norse mythology. When the missionaries cut down the Frisians' holy Jupiter's oak, there was hell to pay: Boniface allegedly met his demise by a futile attempt to stop a knife attack with a Bible.

Quite a grim story to say the least, and the song evokes that pious gravitas and then some. Beginning with a beautiful, searching guitar sequence and glimmering chimes, 'St. Boniface' ominously beelines towards a searing furnace of distorted noise, somewhat reminiscent of Preoccupations. But the song doesn't let the listener off easily like that. Not even in the slightest. Following Elgersma's anguished howls ("Where's my faith?"), the song seamlessly veers itself into an entirely new plane of sentience. It's a baffling moment: like discovering the wi-fi password of heaven by chance. And suddenly that smouldering layer of distortion soars from pure dread to a joyous fanfare. Just like that. Amazing.

Indeed, 'St. Boniface' is a compelling testimony to The Homesick's heritage: impartial to both the good and the bad. Fast forward to the here and now: several monuments in the largely christian town of Dokkum are named after Saint Boniface. Given that the Frisians' own proud indigenous culture is still present, you could consider this little factoid a bit dubious. That joke probably wasn't lost on The Homesick, who all grew up in households anchored in Christian values. But the serious undertones that burrow clandestinely beneath their music allude to so much more. Could it be a feint acknowledgement that celebrating, exhuming and assimilating history validates your art? Despite their trickster personalities, The Homesick pull off this complex mood piece without resorting to pantomime or snooty irony. Make no mistake: this is heartfelt, romantic music that also hits you like a motherfucker.

'St. Boniface' might be Youth Hunt's pivotal track, but The Homesick take liberty to swing the pendulum a number of surprising directions. Opening cut 'Half Aryan' elemental bass romp discharges with a giddiness SO guddarn infectious, it renders the song's gnarly post-punk stylistics to fully-manifested pop bliss. The Homesick pull off the same feat with the sidewinding, Drums & Wires-era XTC vestige 'Gucci Gucci', proving themselves to be adept students in the Outkast School of Writing A Great Pop Hook in Odd Time Signatures. The deliciously coy 'The Best Part About Being Young Is Falling In Love With Jesus' is a straight-up party anthem.

Fundamentally speaking, The Homesick's unadulterated pop excursions are what sets them apart from peers like Fat White Family, Rats on Rafts and Cabbage, who appear to seek out more obdurate pastures. To be more concise: Youth Hunt's more exploratory MO never abandons that lighting-in-the-bottle sense of relish and joy. 'Eater of Meat', a potent but playful lament on the culture shock between pastoral and urban Dutch subcultures, kickstarts with firecracker drum breaks, only to levitate into a full undiluted blastoff with a mighty Frisian battle cry. The slow burn and ensuing rainbow parade sends Youth Hunt off into the sunset in celebratory, gleeful abandon.

There seems to be a perpetual notion that rock music is mired, 'obedient to an expired paradigm', as The Dirty Projectors' David Longstreth recently bemoaned. Be that as it may, you certainly couldn't tell by listening to this record. With Youth Hunt, The Homesick prove that – regardless of genre, subculture or stylistics – the best form of revolt is a bold and wholly positive proclamation of selfhood.