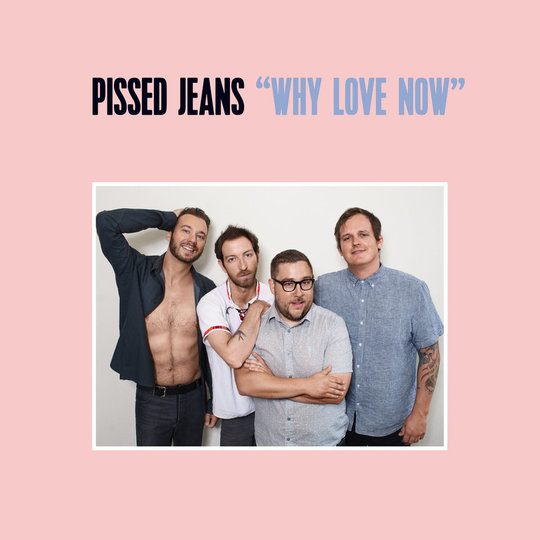 It feels lazy to mention Donald J. Trump’s apocalyptic presidency in an album review these days, but sometimes the source material demands it. Since the election of 'The Donald' in November, the music world has been waiting for the first post-Trump record. An album of hate, anger and perhaps even confusion that an establishment that holds distain for everyone other than the straight white male has managed to take over the white house, and with it, western democracy.

Back in 2013 it seemed unfeasible that Pissed Jeans would be able to increase the fury contained in Honeys, but boy, how I was wrong. Why Love Now, the Allentown thrashers' fifth album smashes their back catalogue to pieces, one blood stained swing at a time. First single ‘The Bar is Low’ sounds like it has fallen straight out of one of Charles Bukowski’s whiskey-soaked tales of debauchery. The track oozes self-loathing and projected the view of a world very much on it’s knees. Swamp-drenched guitars push through your frontal lobe while Matt Corvette’s pained screams tell us, once and for all, that Pissed Jeans mean business.

It would be extremely easy for a group this angry to slip into cliché and become nothing more than a group of fully grown adult men shouting at 'the man'. Thankfully this has never happened during the groups decade long existence. A lot of this is down to how they have managed to address their anger. This isn’t some sort of act to appeal to moody teens, it’s real feelings from a bunch of perpetually pissed off young men from middle America. The swift one-two knockout of ‘Ignore Cam’ and ‘Cold Whip Cream’ prove this, addressing real life concerns with rants about the crap-storm that is the twenty-first century.

A hefty kick to the gut follows. ‘Love Without Emotion’ is a chugging behemoth of a song. It almost feels like there’s some sort of poetic meaning behind the filthy guitar motions, but I just can’t place it. The restraint on show during the song is extremely unnerving, making you feel as if there’s a nutter lurking somewhere in the shadows ready to pounce on your unsuspecting head when you least expect it.

From here on in the record changes tone: the punk is still there, don’t get me wrong, but the focus appears to have changed. From here on it the group are, as they have been throughout their career, intrigued with the idea of the sexist pig. The type of man who haunts all aspects of life. A power-obsessed individual who wants it all, and believes the world owes him a favour. Which is kind of fair after all, because things are really tough when you’re a man, aren’t they…

Pissed Jeans absolutely nail this analysis, taking on the role of the sexist, deflated man with uncomfortable intensity, successfully peel back the patriarchy of the western world and reveal it for what it is: A selfish, violent beast. Finale ‘Not Even Married’ takes us further into the psyche of America, it’s stomach churning riffs push us through a Budweiser stained star spangled banner and into the back room of a bleak and dirty bar, the kind even Charlie Day wouldn’t be seen in.

‘Why Love Now’ is the first in a potentially endless stream of politically charged punk rock records this year. However, it’s extremely hard to see any of them trumping this glorious, if uncomfortable, masterpiece.