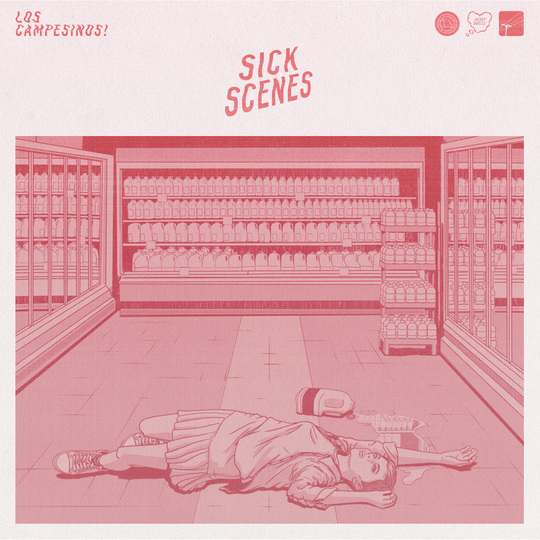 Hey, remember that scene in The Simpsons where Homer, faced with imminent death, goes through the entirety of the grieving process in absurdly quick fashion?

A glimpse of a golden era, for sure, though you get the sense that if you were sat in a similar position and the grim task of relaying the pertinent information fell to Los Campesinos! that maybe, just maybe, you’d be able to make peace with it.

As if tempting fate, this scribe would wind up on a hospital trolley about a week after penning the above words, frantically asking a bemused doctor, ‘Am I dying?’. A rueful shake of the head and dismissive laugh never felt so welcome, but the truth, dear reader, is that the kissing disease should be immediately renamed as there is zero gaiety or frivolity to be enjoyed when laid up with such an excruciating and energy-draining nightmare.

So there I was, sprawled out amidst a procession of Friday night/Saturday morning trauma that ranged from drug-assisted weekend overindulgence to significantly more harrowing fare, all of which put things into perspective, especially once headphones were eventually donned and a different set of Sick Scenes entered the fray. Welcome ones. Los Campesinos! have always put the precipice into their own unique context to the point that few acts mix the convivial with the sentimental quite as effectively as the Welsh outfit.

Their catalogue is hardly short of examples but take a listen to this album’s predecessor, a triumph of a record that turns words like ‘winsome’ and ‘wistful’ into weapons both jagged and gilded. Detractors of this band might suggest that it’s all a bit student-y, an obvious collision of on-the-nose couplets and buoyant arrangements in the face of knowingly erudite-yet-grounding subject matter. But to dismiss LC for their fervour is to miss the point entirely, and it does a disservice to a faction that continue to endure and look at the world much in the same fashion as those who’ve been on board since they were cordially invited to have a bop together almost a decade ago.

No Blues was arguably blessed with more ennui than usual, its lived-in conviction authentic as talk of love, loss and the majesty of Tony Yeboah washed over a clutch of tracks that represented people at something of a crossroads in life. Sick Scenes follows suit accordingly, right down to the expected references to football and wrestling, but it’s further down a forked path, if such a manoeuvre is possible.

”Depression is a young man’s game”, notes frontman Gareth David with signature rueful spikiness on ‘5 Flucloxacillin’. Now the wrong side of 30, it’s only natural that he would meet the burning world around him with a sense of detachment and questions that may well go unanswered. The early days of carefree promise are gone – here recalled a touch mournfully on caustic opener ‘Renato Dell’Ara (2008)’ – replaced by day jobs and the reality of slogging it out in something of a cult enterprise as societal walls slowly start to close in.

And yet, Sick Scenes isn’t a doom and gloom exercise, nor miserable thousand-yard stare. Instead it is the sound of a band doubling down on what brought them to their particular dance, peppered with unflinching honesty and conviction, all dressed up in requisite ‘take us or leave us’ glamour. That’s why you’ll find good old-fashioned frustration - ”It seems unfair to try your best but feel the worst” hollered to the heavens on the rollicking ‘I Broke Up In Amarante’ – cosying up to scenes from a teenage marriage on the excellent ‘A Slow, Slow Death’; ”I got your initials inside a heart tattoo / We two in vermillion, we two a lover’s coup”. And then there’s a short Brexit-inspired lament.

I know, it sounds kinda ropey, right? Only, it doesn’t. As ever with Los Campesinos! there’s a frequency to tune into here, and it can be quite the succour. You go back to a song like ‘Glue Me’ and a ‘wait, is the glass half-full or half-empty?’ treatise often enough and you realise that it really doesn’t matter, that it’s about getting swept up in this strange maelstrom and enjoying the visceral reaction if it comes. Here, you delve into the gloriously simple ‘Got Stendahl’s’ and its talk of séances, ghosts and monoliths, losing yourself in a coda as wounded as it is hopeful. You dive past a dodgy pun title like ‘For Whom The Belly Tolls’ and fall for the song within. You feel the everyday punches thrown in ‘A Litany/Heart Swells’.

That’s the intoxication, felt on a long walk through the rain or when in need of escape as troubled souls stretch out nearby beneath cold blinking lights. In the right moment, it’s as powerful a drug as a shot in the arm, a crutch as you get older and don’t know where the fuck you’re going. Then again, this is a record that closes on a most sobering exclamation point, so perhaps it is indeed all about perspective, after all.