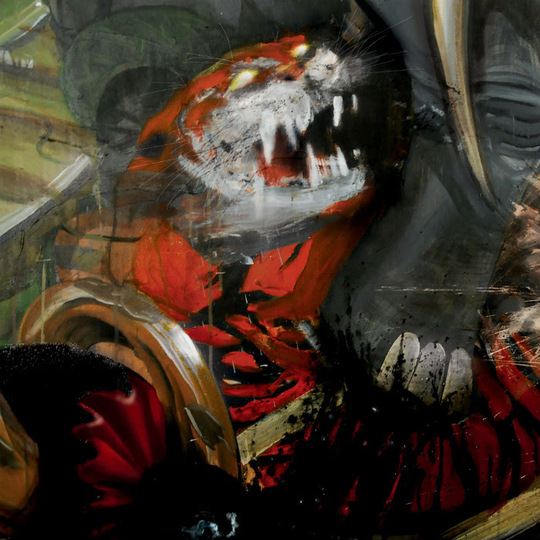 Pink sunset flares over the horizon. The interstate and I are one today. Sometimes nightmares cross my mind – slipping under 16 wheels, sideswiping a sedan, flying over the curve of the exit to I-85. But not today, not today. Lean into the turn, sweep two lanes at 80 miles per hour, glide past three vans, swerve right when some asshole cuts in front. How many times a day do I laugh at death, I wonder. This evening, I count thrice.

Fitting, really, to compare an average day on the interstate with a drive through Sleigh Bells. Until now, Derek Miller and Alexis Krauss have always created the illusion of athleticism with the latter’s cheerleader enthusiasm and the former’s shameless thunder riffs: Treats was like a pep rally on steroids, Reign of Terror an Olympic stadium, Bitter Rivals a dojo for the Powderpuff Girls. Jessica Rabbit remains as ripped as ever, but our intrepid duo have transcended the sports field – indeed, now Sleigh Bells occupy five fields simultaneously, at the risk of their own lives. Anything’s possible with quantum physics, babe – and only quantum physics can explain how ham-fisted guitar licks, deconstructed fanfares, hip hop beats, massive pop hooks, and the most grandiose fuck-you attitude these ears have ever heard could merge into such radiant pyrotechnics.

Lawdy, lawdy, lawdy. Where to begin but with a racing heart on the fritz? Everything about Jessica Rabbit is visceral – full-force drum slams, the slick claps, Miller’s steely slabs of guitar, lyrics replete with bombs, knives, and natural disasters. And Krauss is out for blood, as she belts fighting words like fisticuffs - you’d best believe her when she warns ”If you so much as look at me wrong / I’m coming down on your head and your home” on the colossal metal jam “Throw Me Down the Stairs”. But the duo flaunts real finesse whenever they pivot between hammer blows and ballet strides – in the same song, the guitars drop, and Krauss twirls on mist in a dreamscape for 30 seconds when she croons, “do you know what I mean?”

Blackout. We must begin again. But dear god, those belters! Punches fly from everywhere! Opener 'It’s Only Us Now' butters you up with the Joe Walsh licks, then pummels you down with the studded trap beat, behemoth riffs, and Krauss in full galactic flight. 'Crucible' slays so much – think Britney Spears backed by Laibach - that the weird pipe-traversing breakdown in the middle doesn’t kill the buzz. And 'I Can Only Stare'? Is this heaven, or just the missing link between Sky Ferreira and The Cure? The genius part is, by the third time through, you wanna fly with them – hail the ginormous theatre of 'Lightning Turns Sawdust Gold', or 'I Just Can’t Stand You Anymore', a hybrid beast of Joan Jett heat and Pink cool, and the perfect battle cry for playing chicken on the interstate.

Burnout. Start again, gently this time. Yet, even when Sleigh Bells pull back and yield to tense synths, gilded pianos, and other studio gizmos, the listener still feels pinned to the floor by a physical force. Witness the incredible 'Loyal For', a study in maxed-out minimalism that borrows equal parts from Arthur Russell and Beyoncé; or behold “I Know Not To Count On You”, the acoustic-driven hangover of a ballad that genuinely sounds wrecked. There’s even a quasi-conventional, Lorde-ish pop song in 'Baptism By Fire' – and while the tip-toe piano thing and millennial whoops might veer too close to the mainstream for comfort, several puzzling lines keep the ruse going (I’m fond of “I see the judges drown / all drunk on context”).

But just when the listener might feel safe on the home stretch, in comes 'As If' for the final showdown. There will be a traffic jam before the apocalypse anyway, won’t there? Hence this lightning round of Lightning Bolt terror, that kills the switch with strobe lights and pop-up choirs and one last close-up at the queen of the hill. Blackout again. How many times a day do you laugh at death? Who knows – but with Jessica Rabbit, Sleigh Bells have mastered mortality. If you can’t handle that, then get off the road, chump.