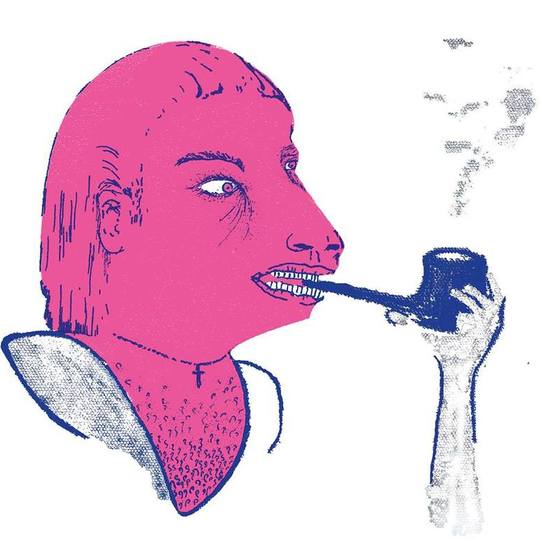 Hominid Sounds is an interesting and exciting new label if this five-track EP is anything to go by. With a series of London DIYers throwing their hat in the mix to make this label happen – including producer Wayne Adams at Bear Bites Horse – who puts his signature fizz on these tunes, How About Never has two-piece We Wild Blood throw some Thor-like levels of noise down from the sky. It deserves more than this current incarnation of a (understandably) cautious limited edition cassette and digital release.

Opening with ‘Haunt Yourself’, several moods are thrown into the mix. The down-stroke guitar drones and two-note riff recalls Slowdive, with a soft keyboard part behind the menacing notes. Andy Clydesdale’s vocals are drawled, or slurred, out and the track explodes in each chorus. Low end distortion dominates the mix and the rhythm bursts ferociously, in the way Trail of Dead did so well, especially in their Madonna and Source Tags And Codes period.

‘Primrose Road To Hell’ is the kind of Lightning Bolt style spazz-jam on keyboards and drums that’s obviously going to get the noiseniks going; with wiggly analogue keyboard squiggles and meticulously syncopated drum patterns the track recalls Adams’s own no-wavers Shitwife.

‘Let’s Party’ follows, and starts with a Stephen Hawkins sample on how he can party too. This leads into some serious riff wielding that slowly escalates under Clydesdale’s voice, as he yelps like a new born having just discovered they can scream while burbling vagaries about going to parties. This EP demonstrates We Wild Blood’s love for chorusses that blow up. They’re often expected but still surprise on arrival. They also achieve this with the bare minimum, ‘Red Mist Rising’ thuds under a four-beat kick drum and guitar bends oscillate into dischord while Clydesdale mumbles in an Ian Curtis style. The last series of guitar strangulations in the song wobble for a seeming infinity that’s hypnotic and claustrophobic.

In closing with ‘The Murky Night World Of The Unconscious’ they conclude their brief and hugely satisfying detonation with a withdrawal into ambience. A sample of ‘Llorando’ from David Lynch’s Mullholland Drive is underpinned with guitar notes that ebb and slide. While there’s no ferocity to this, its suitably unnerving. Its may be obvious, but in using a Lynch soundtrack sample to multiply the eeriness, they close with a statement of quiet confidence, making How About Never? a hugely engaging series of controlled musical explosions.