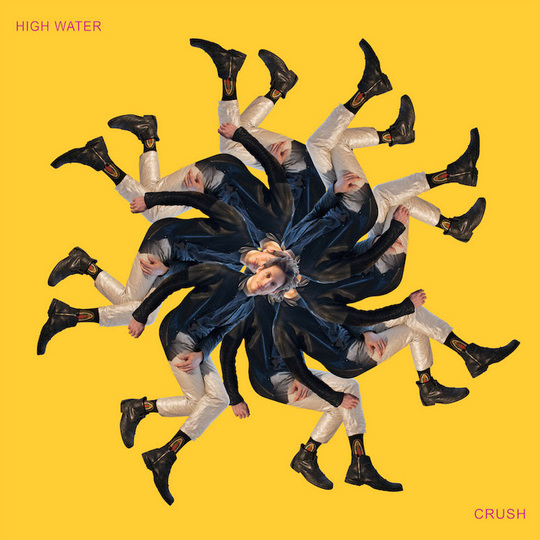 Crush, the debut LP from Will Epstein’s melancholy slightlyelectro project High Water is the epitome of ultra-indie, in a mostly good way. From the moment the ever so slightly affected vocal kicks in on ‘Moonlight Mind’, it’s hard to hear this genre-defying album without thinking 'oh, it’s *that* kind of music'. It’s quite a good example of *that* kind of music though, often beautiful and quite creative, audibly informed by Epstein’s background in jazz.

The mainly piano-based album has a certain warmth to it. The soft music, simple but by no means uninteresting or plain, and the softness of his early-Perfume Genius-esque voice, make for a strangely comforting sound, even though the lyrics don’t often have a straightforward meaning and the production makes it feel a bit distanced somehow. Not quite comforting like a hug from a friend then, songs like opener ‘Moonlight Mind’, ‘Run Around You’, and closer and title track ‘Crush’ feel more comforting like an oddly knowing smile from a kindly stranger. You don’t necessarily know what they mean, or what they think you’re sad about, and somehow that’s what’s so nice and so reassuring about it. The various outside noises present throughout the album help to make this picture just a little more vivid, and add ambience to its mood.

And that’s what feels important about Crush; not so much the specific meaning of every word, but the mood the words create, and the images they paint in that mood. Indeed, the weaker parts of the album tend to be tracks like ‘Changed The Locks’ whose meaning is less open to that plurality of interpretations. On tracks like ‘Seattle’, by contrast, the closest you get to straightforward meaning is specific imagery, and even then they often make up sentences or songs that don’t quite make sense, like a sort of William S. Burroughs who writes about Washington and feelings - the aesthetics of the phrases matter more than the meaning.

Occasionally, the use of artifice to create a sense of 'authenticity' is a bit jarring. Things like the production to make it sound like vinyl feels a bit like faking it so real it’s beyond fake, and the decision not to edit the sharp intakes of breath out of the vocal in ‘Run Around You’ gets very grating very quickly.

Mainly though, the ultra-indieness is a positive thing, and soft, slightly muted effect on the music and the noises like the running water frame the imagery of the album, coming together to make it feel like you’re watching it through a rainy window. It suits the album which, thought shifting between light and dark sometimes, maintains a sense of bleakness throughout. It feels like watching light rain from inside a warm room as it falls and clears and falls again, while the sun sets on a bleak autumn day.