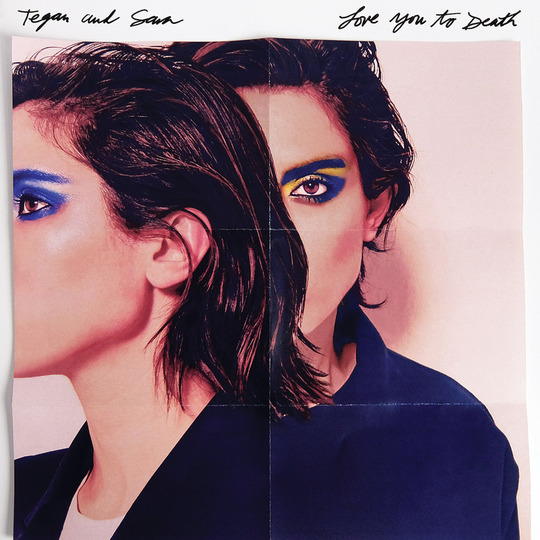 If you take nothing else away from this new Tegan and Sara record, at least know that it’s never too late to change. A decade ago, the Canadian twins had established themselves as efficient purveyors of what you’d probably have to describe as an awkward compromise between pop and rock; the hooks and the melodies were there, particularly on 2007’s The Con, but the guitars were angular and persistent, and the lyrics suggested deep emotional conflict. Take into account that Chris Walla, once of Death Cab for Cutie, sat behind the desk on that full-length and you should be able to infer precisely where the Albertans were at, at that point. Walla is a fine producer, but he’s not known for jagged edges. He naturally gravitates towards warmth and richness, and setting that against a spiky songwriting style seemed by no means ideal - and yet it worked.

By Sainthood, the pair’s sixth LP that was released in 2009, it was clear that a breakaway was on the cards. The whole album felt like a precursor to The Big Tegan and Sara Pop Moment; they continued to tug ferociously on the ‘indie rock’ leash, but sprinkled the record with nods to their back catalogue that, in retrospect, feel like a knowing wink to the fans that were with them from day one. It shouldn’t really have come as any surprise that, on 2013’s Heartthrob, Walla had been dispensed with in favour of chart-pop guru Greg Kurstin, but the voracious appetite with which Tegan & Sara tore through ten bona fide pop gems actually bordered on disarming. You realised, in retrospect, that they’d been building towards out-and-out pop catchiness - they just hadn’t had the environment and resources afforded to them before.

At that point, Tegan & Sara felt like the world’s most brilliant pop group. They had everything; melodies and hooks were in bountiful supply, their lyrics struck a delicate balance between insight and abandon, and their sound was so polished you could see your face in it. With Love You to Death, they’ve completely doubled down on that. Again, Kurstin mans the boards, and again, the twins give themselves over entirely to razor-sharp, super-clean, chart-courting pop music. This album is less than 32 minutes long, and for a reason; there is a clinical economy to the way that Tegan and Sara write nowadays. Opener 'That Girl' is an exercise in lyrical brevity, over an electronic beat that pulsates and yet feels cleverly restrained. Instrumentally, minimalism kind of feels like the name of the game here. It really is as if the duo and Kurstin raked over Heartthrob with forensic attention to detail, stripping away anything that wasn’t deemed entirely necessary. ‘Stop Desire’ carries off the slow-burning verse to massive chorus manoeuvre with fabulous vigour and fizz, and ‘U-Turn’ provides compelling evidence of experimentation on what is otherwise a sharply focused LP; the groove’s tight, and the vocals over it are playful, another knowing wink on an album full of them.

And that, in itself, is a departure; Tegan and Sara used to be the sort of duo who were very much given to shrouding their lyrical meaning in metaphor. They’ve always packed an emotional punch, and there’s actually something about the sound of both Heartthrob and Love You to Death that suggests that particular facet might’ve automatically fallen by the wayside; perhaps there’s an ingrained belief that pop music packaged this attractively shouldn’t need to carry deeper meaning. As was the case last time out, though, there’s genuine emotional exploration here, particularly on the directly confessional ‘100x’, which has them turn meekly, but honestly, on each other. ‘Dying to Know’, too, becomes just that little bit more unsettling with every loop through the album; after all, fixation and infatuation are no joke in the digital age, and here we have a band who grasp the nuances of the situation.

It would be dishonest and wrong of me to suggest that I possess anything more than a cursory knowledge of the pop charts, but here’s one little thing that strikes me; when I was a kid, you never saw the same artist have two or even three separate tracks in the top five. Obviously, the fact that the likes of Justin Bieber, Drake and Rihanna have been able to pull that off this year is down to the quirks of the download age, and yet Love You to Death is such a brilliantly accomplished, gorgeously crafted pop record that it actually sounds like the sort of album that should be exclusively inhabiting the top ten, whether it’s here, Canada or Timbuktu. Everything’s slick, shiny and synth-driven, and you wonder what took Tegan and Sara so long; repeat listens reveal a couple of songwriters utterly at ease with themselves, especially when you delve into ‘Boyfriend’s fabulously casual inversion of society’s take on gender and sexuality.

At points, it’s so sharp as to be borderline surgical, and that’s where my anxiety for the band’s future kicks in; at points here, it feels like the emotional content is a bit of a bare-minimum job, compared to the broad confessions of old, and there’s points where Love You to Death sounds clean to the point of being sterile. But those concerns are for next time. For now, Tegan and Sara have reached the end of a thorny, awkward path to pop perfection. Those years of uncertainty have only sweetened the realisation.